It’s absolutely frustrating when your iPhone’s battery dies on you mid-game or while watching the climax of your favorite movie. Having said that, don’t you sometimes wish you had enough of a heads up to run and fetch your charger before that happens? 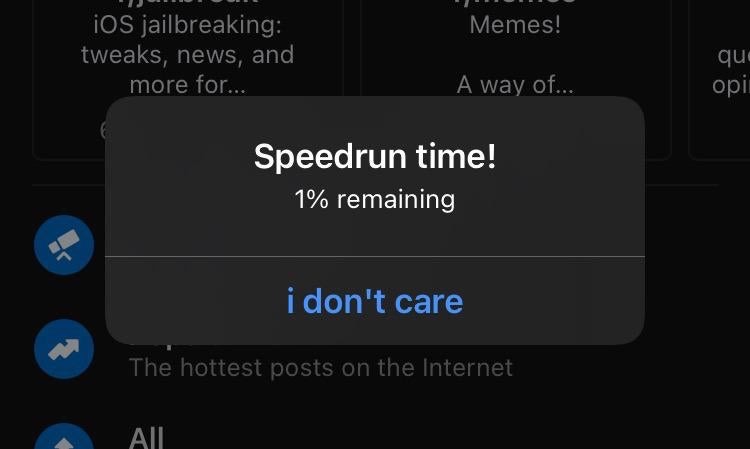 After having a personal experience of their own along these lines, iOS developer ExeRhythm released a free jailbreak tweak dubbed SpeedrunTime that gives you a heads up to plug in at 1% charge before the handset shuts down automatically.

The auto-shutdown measure exists for the sole purpose of preventing your battery from discharging so low to the point of potential damage. It’s a good feature, but the lack of a heads-up is what impacts the user experience.

When you get the pop-up provided by SpeedrunTime, you’re afforded just enough time to run speedily to your charger. Alternatively, you can tap on the “I don’t care” button to let your iPhone die as it usually would.

Something worth noting about SpeedrunTime is that it was built using the Swift programming language by way of the Orion development tool. So in addition to being a useful tweak, it was also created using a modern coding platform.

Those interested in giving SpeedrunTime can download it for free from ExeRhythm’s personal repository via their favorite package manager app, and it should run on all jailbroken iOS 14 devices without so much as a hiccup.

The developer has also open-sourced the tweak on GitHub for those interested in learning more about how it works.

If you’re not already using ExeRhythm’s personal repository, then you can add it to your package manager app of choice by using the URL provided below:

Would you appreciate a better heads-up before your handset auto-powers off due to low battery? Let us know in the comments section down below.