Earlier this week, Apple unveiled the brand new Apple Watch Series 7. There was a lot of speculation surrounding this new smartwatch, and the final result didn’t necessarily match up with the expectations built by rumors. Still, the new Apple Watch does offer some important changes from the previous model.

Apple didn’t talk about a few things about the new smartwatch lineup this year. For example, they didn’t talk about the key performance increases compared to the Series 6, something that the company typically does. The reason is probably because the chip inside the Series 7 is similar, if not exactly the same, as the Series 6’s chip. Those details came to light late last night.

Now, this internal documentation which 9to5Mac reported on today, sheds some additional light on Apple’s newest smartwatch. It’s a comparison document that puts up the Series 7 against other Apple Watch models, including the Apple Watch SE, Series 6, and Apple Watch Series 3. 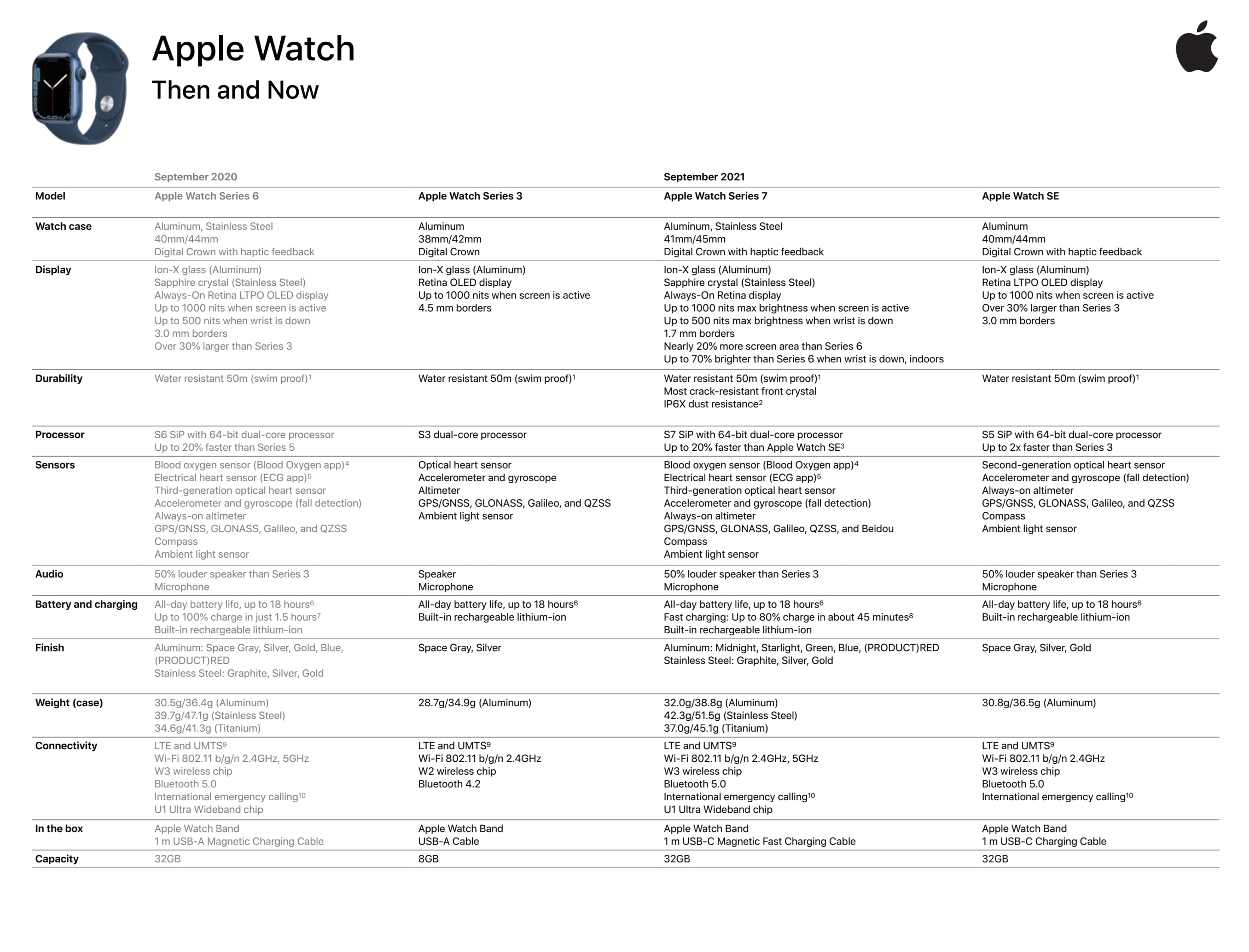 Now, it’s worth noting in the documentation that it says Apple is calling the processor in the new Apple Watch Series 7 the “S7.” That would suggest some changes. However, that same documentation only offers the same details as the Series 6 processor, which is the “S6.” Meaning, it’s still 20% faster than the Apple Watch SE, and it’s a 64-bit architecture. Nothing more to go on there.

These elements, most of them anyway, will be included in Apple’s official technical specifications for the Apple Watch Series 7, whenever Apple gets around to publishing them on the site. Apple hasn’t done so, at least not at the time of publication. But, when they do, we’ll be sure to round up the details for you.

For now, though, another interesting detail in this documentation is the weight of each variant in the Apple Watch Series 7 lineup. Here’s how it breaks down:

While Apple didn’t adopt the flat edges for this year’s model, the company did make the screen in the Apple Watch Series 7 bigger. So it’s possible the S7 processor does have some minor differences compared to the S6.

We’ll know more, officially, when Apple releases the tech specs for the new smartwatch at some point in the future. The Apple Watch Series 7 is scheduled to go on sale sometime later this fall. Do you plan on upgrading to the new smartwatch?