Jailbreakers using iOS or iPadOS 14.0-14.3 have long had the option of choosing between Taurine by the Odyssey Team or unc0ver by Pwn20wnd. But earlier in the year, a third option dubbed Manticore was being relentlessly teased.

Six months since our last update on Manticore, the jailbreak still isn’t available to the general public despite a looming public release of iOS & iPadOS 15. Regardless, some notable occurrences transpired this past week that might be of interest to anyone following the project.

The first and most important development was the publication of the official Manticore GitHub page this past weekend. The page, entitled “Project Manticore,” notes that Manticore will be based on the same cicuta_verosa exploit harnessed by existing iOS & iPadOS 14.0-14.3 jailbreaks, adding that it will also incorporate Pattern-F’s pre-jailbreak amfid bypass. 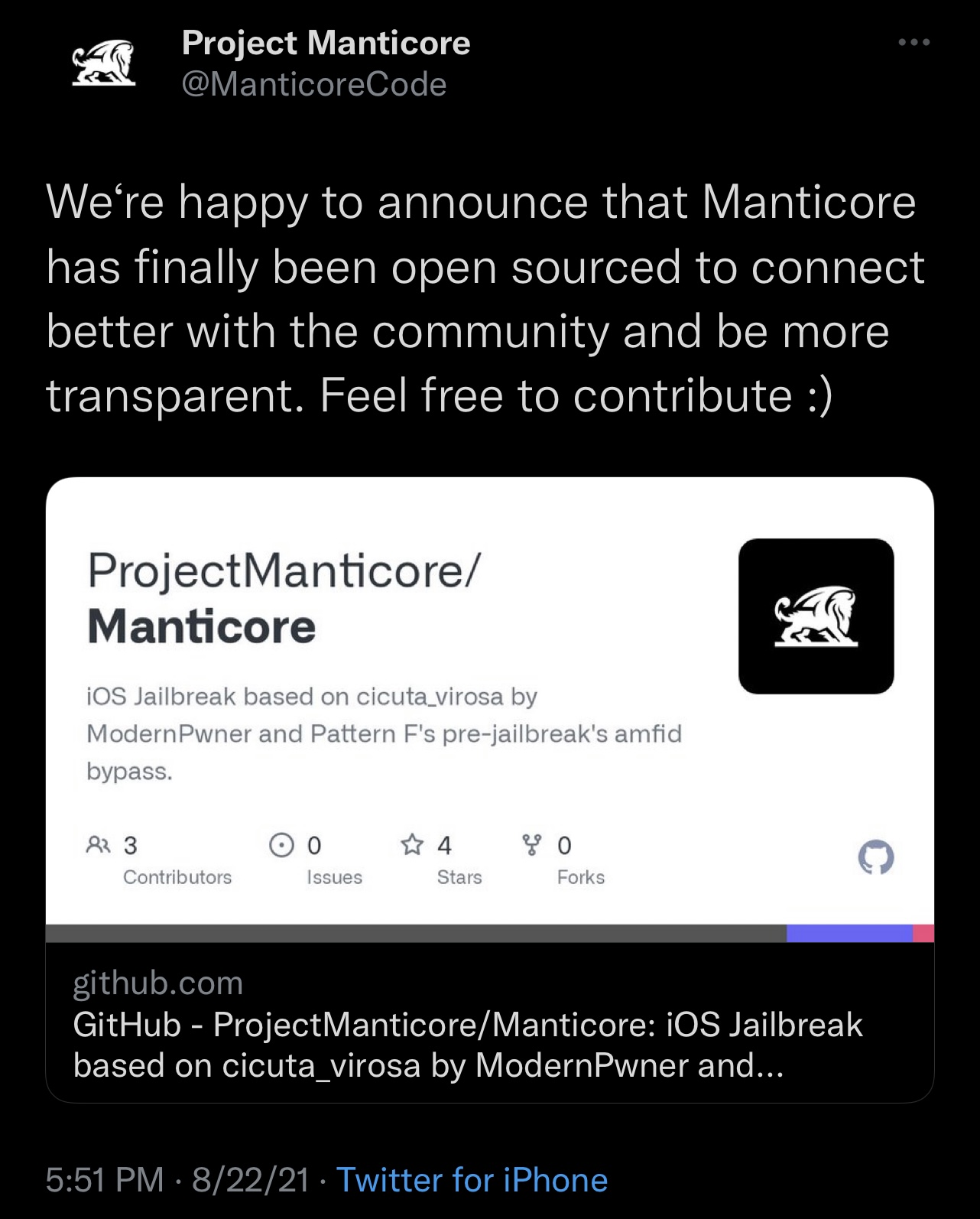 The publication of the aforementioned GitHub page was particularly exciting for the community, as it indicates the Manticore Team’s ambitious approach to an open-source jailbreak and welcomes suggestions from the very community it intends to serve.

Thursday morning, however, Manticore Team developer @rpwnage took the hype a step further after Tweeting what appears to be a picture (shown below) of the Manticore jailbreak’s settings page. 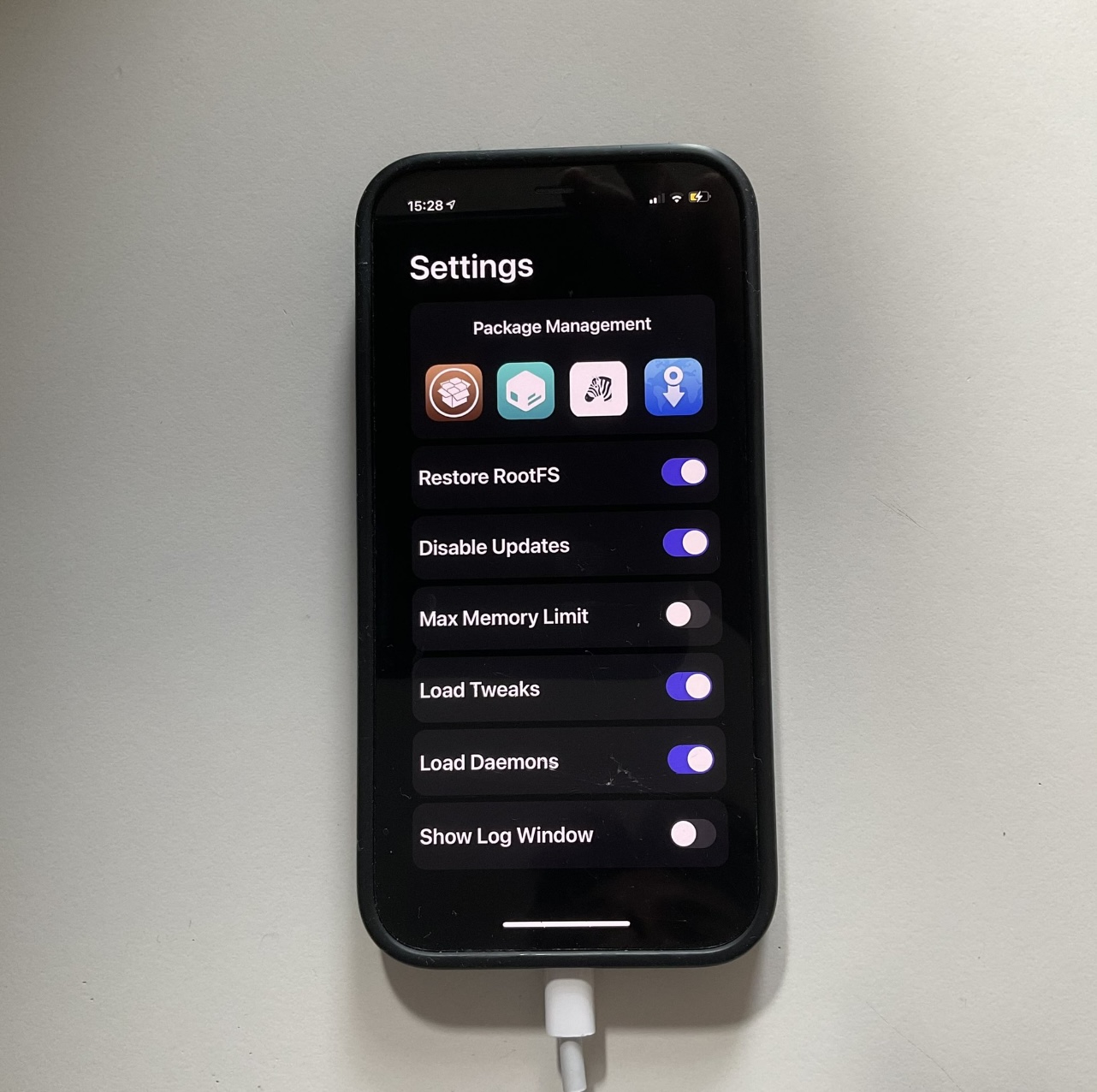 Like most jailbreaks today, the settings page includes a rootFS restore option, a way to disable software updates, the ability to set a maximum memory limit, options for disabling tweaks and daemons, and the ability to show a log window. But one thing that caught our eye was that it appears to enshrine multiple package mangers — namely Cydia, Sileo, Zebra, and Installer.

The checkra1n team originally planned to support all compatible package managers in the Loader app installed by the jailbreak after first use, but it’s apparent to users that this hasn’t yet happened. Conversely, the Taurine jailbreak installs Sileo by default, while the unc0ver jailbreak installs Cydia by default. There are ways to install other package managers on these jailbreaks, however it requires additional steps to be followed by the end user. If Manticore releases this tool as shown, then there are strong implications that it would be the first modern jailbreak to let users choose their preferred package manager at first boot.

Recently, the Sileo Team launched a major update to Sileo which included support for running on various other jailbreaks besides those led by CoolStar. Thanks to this newfangled support, Sileo is now more compatible with competing jailbreaks than ever before.

Despite the latest teasers by the Manticore Team, there is still no ETA for a release. The team maintains its position that the long delay is because it wants to make everything related to Manticore as perfect as humanly possible before releasing, as it doesn’t want to rush the project. This ‘it will be ready when it’s ready’ release plan has been met with both compliments and criticism from the jailbreak community as some grow increasingly impatient.

Are you excited about Manticore and the potential it brings to jailbreakers everywhere? Be sure to let us know in the comments section down below.