There are a lot of apps out there. Whether you’re browsing through Apple’s App Store or Google Play, you can find an app for just about anything. In comparison, preinstalled apps aren’t as numerous. But apparently they take up the lion’s share of attention anyway.

That’s the results of a Comscore study that ranks the popularity of preinstalled apps compared to third-party options, which was shared by The Verge. Interestingly, it shows that preinstalled apps like Weather, the Clock app, and even the Calculator app (on iOS) are more popular than even the likes of YouTube, Facebook, and the Amazon app.

Facebook’s place on the list is especially interesting because the study itself was commissioned by the social network. The goal? To show that preinstalled apps have a leg up over the competition right out of the box. And it’s not just on iOS, either. Preinstalled apps on Google’s Android are just as dominant, as far as usage is concerned. 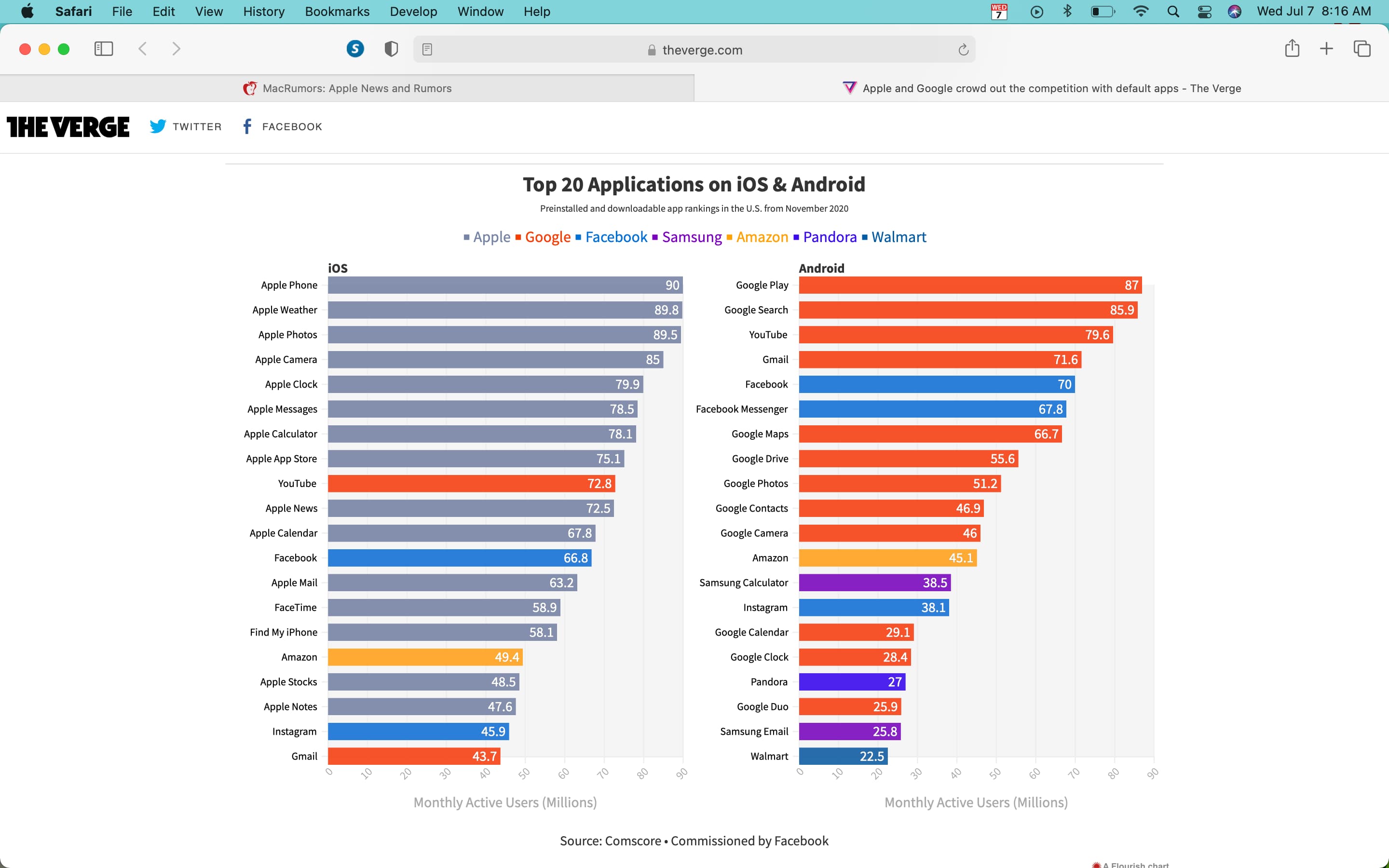 Of the top 20 apps on iOS, a whopping 75 percent are made by Apple and available on iPhones right out of the box. For Google, it’s 60 percent.

In the graph that you can see above, it shows the number of monthly active users actually using these apps (according to data gathered by Comscore). What’s interesting here is that some seemingly random preinstalled apps are used more often than some wildly popular apps on Android. For example, the stock Calculator app on iOS has 78.1 million monthly active users. But the Gmail app on Android? 71.6 million.

According to Comscore, they reached these results in a couple of different ways. First, 4,000 people were asked which preinstalled apps they use back in November of 2020. The firm also gathered data from websites and apps back in December of last year as well. Comscore did leave out features like Siri or Google Assistant, and browsers. (One can only imagine where Safari or Chrome would be on these lists.)

As mentioned above, Facebook commissioned this study. The reason? To show the “impact of preinstalled apps on the competitive app ecosystem.” It appears the social network giant is trying to show that Android and Google are both inherently anti-competitive for offering these preinstalled apps which are obviously so much more popular than third-party options.

In addition to that, the results show that third-party options for preinstalled apps may have a tough time gaining traction against what’s already available on a device upon first setup. Basically, the results show that a calculator app from a developer that has it available in the App Store might not get as much attention as Apple’s own Calculator app — which is apparently very popular amongst iOS users.

As you might imagine, Apple responded to the Facebook-backed results in a statement to The Verge:

This Facebook-financed survey from December 2020 was narrowly tailored to give the false impression that there’s little competition on the App Store. In truth, third-party apps compete with Apple’s apps across every category and enjoy large scale success.

The results are definitely interesting. Maybe not so much for the primary reason Facebook was hoping, though.