It wasn’t long ago that I shared my personal experience with using the Google Fi cellular service as a secondary carrier on my iPhone. But my curiosity pertaining to a dual carrier setup on my iPhone led to me to research several other Mobile Virtual Network Operators (MVNOs), and you can probably take a few accurate guesses as to where that rabbit hole took me.

Upon being blown away by Google Fi’s cellular reception and data speeds, I decided to drop AT&T as my primary carrier and switch over to T-Mobile. To those asking why – the T-Mobile network powers Google Fi in my region, and the un-carrier provided an enticing offer after announcing its new truly unlimited Magenta MAX plan earlier this year for a fraction of what I was paying AT&T.

But all that aside, I recognize that no cellular network is perfect. In many cases, one carrier’s dead zone is well-covered by another, and that’s one reason why I’ve found it valuable to have service from more than one network at any given time. Unfortunately, having more than one plan with one of the big three networks is pricey and out of most people’s reasonable budgets, and that’s where MVNOs come into play.

An MVNO is essentially a smaller carrier company that sells cellular service on the backs of the big three – AT&T, T-Mobile, and Verizon Wireless – for a fraction of the price that the big three would charge. Some MVNO’s provide service using only one of those networks, while others provide service via more than one. In many cases, the catch for paying less for service comes in exchange for the tiny catch that data may be de-prioritized when parent network users congest a particular cell tower. Still, the trade-off can be worth it.

There are all kinds of MVNOs out there, including Metro by T-Mobile, which piggybacks on the T-Mobile network, and Cricket, which piggybacks on the AT&T network, among several others. But one MVNO that I’ve had particularly good luck with when balancing important factors such as service, features, and price is Visible, which is an MVNO that operates on the Verizon Wireless network. 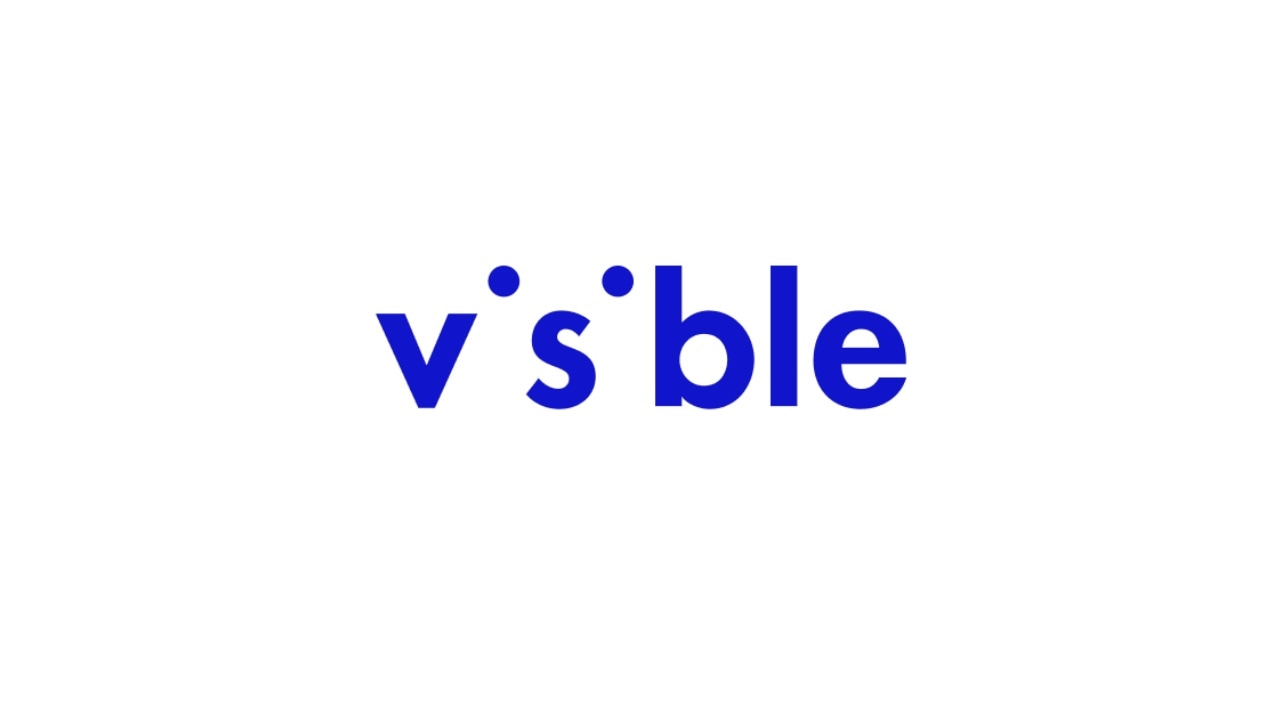 One of the things that stands out the most to me about Visible is that it’s incredibly affordable for a single person. While most cellular plans for one person start at around $60 and go up from there, Visible charges just $40 per month for one person. That cost could drop to only $25 when you join a so called ‘Party’ with several members which compares to having a ‘family plan’ on a major carrier except that you could be shacking up with complete strangers instead. More importantly, that cost includes the taxes and fees, which makes Visible particularly attractive for singles who don’t have a family to speak of, and the low cost is also appealing to anyone who might be considering a secondary carrier on their iPhone – like myself.

As far as coverage goes, if you can get service with Verizon Wireless, then you’ll get service with Visible. The company offers both 4G LTE and 5G network access on compatible handsets, including both regular 5G and mmWave 5G (the faster stuff). It’s worth noting that 5G data speeds will be capped at a maximum of 200mb/s on Visible, but that’s no trouble given that most home internet connections can barely keep up with that.

In terms of features, Visible provides unlimited talk, text, and data. The data isn’t capped, nor can you be slowed down based on the amount of data you use. The only catch is that your speeds can be de-prioritized if a high number of other Verizon Wireless customers are connecting to the same cellular tower you are – hence congestion. Further, Visible includes personal hotspot with unlimited data for up to one connected device at no additional charge, but it tops out at speeds of 10mb/s. That’s more than enough to get through some web browsing or YouTube videos on your connected device.

Given that I would be using Visible as a secondary carrier on my iPhone, all the features mentioned above paired with the mindbogglingly low price of $25 per month and the understanding that it connects to the very reliable Verizon Wireless network was enticing. In fact, paired with the T-Mobile network, I can enjoy the seemingly unrelenting coverage of two uncapped data plans on two expansive cellular networks for less than what I was paying AT&T alone for a capped data plan. If you’re in the same boat, then this could be for you.

Many are probably wondering what the 5G coverage is like with Visible, and honestly, it depends largely on where you live. Unless you live in a densely populated city, you probably won’t see much of it. Verizon Wireless has hardly invested a fraction of what T-Mobile has in its 5G network this early in the game, but I expect that will change as 5G network deployment continues long into the future. Verizon Wireless has already deployed 5G coverage in more than 1,800 cities across the U.S. that Visible customers can also utilize.

Wondering about those data speeds? It can be hit or miss – depending on location and network congestion at any moment. In densely populated areas, you might be lucky to see 5-10mb/s, but under the right conditions I’ve seen up to 200mb/s fairly frequently, with typical average speeds ranging between 30 and 80mb/s:

My experience with the coverage is that I’ve never been without a cellular signal with Visible. In fact, places where I would drop my connection with T-Mobile, Visible did all the heavy lifting. Your mileage may vary, especially depending on the primary carrier you use and whether you will use dual carriers on an dual-SIM compatible iPhone or not. Only the iPhone XS/XS Max and newer support dual SIM capabilities. 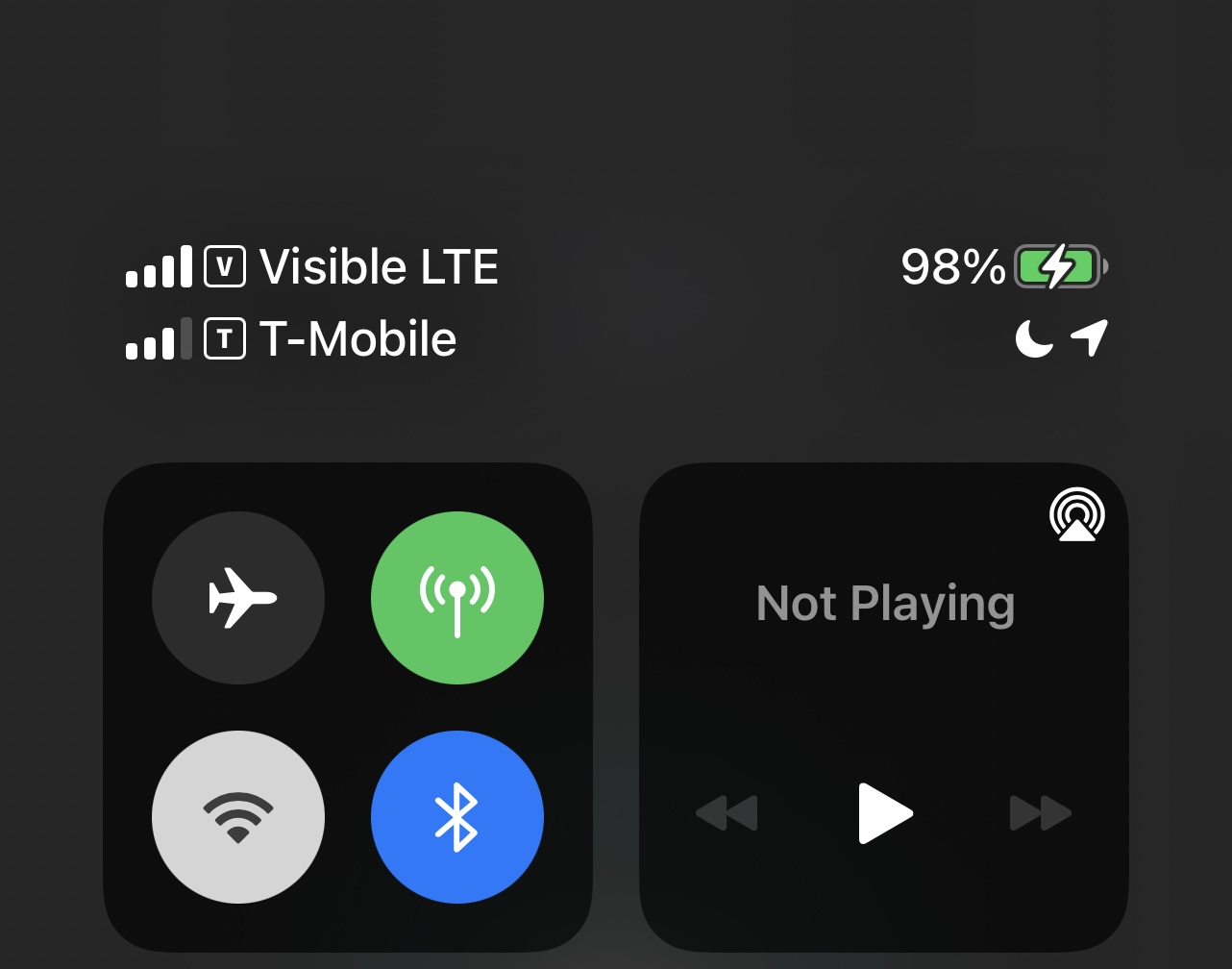 With the ease of wireless setup requiring nothing more than downloading a free app from the App Store, registering an account with Visible, and downloading an eSIM, acquiring a signal on the Verizon Wireless network for just $25 per month can be accomplished in as little as 10 minutes.

As always, iOS makes it easy to work with two cellular networks at the same time. The Status Bar natively discerns the two networks separately with their own wireless signal indicators, and users can designate which provider will be used by default for data transmissions and communications independently of one another. This, of course, means that dual-carrier users will have two separate phone numbers on the same device, but those using Visible as their primary carrier instead of a secondary carrier needn’t worry about the extra bells and whistles associated with a second carrier and can even transfer their existing phone number to Visible.

Those interested in trying Visible out for themselves can download the free app from the App Store and register for a free account using the promo code 3pd8v2 to enjoy their first month of service for just $5. It would then be strongly recommended that you join a party to make each subsequent monthly bill just $25.

Visible users are always sharing links to their Parties online, so you’ll have no trouble finding one large enough to perpetually enjoy savings on your cellular service bill or to occupy the eSIM on your dual carrier-enabled iPhone.

Do you plan to give Visible a try as a primary or secondary carrier on your iPhone? We’re excited to hear why or why not in the comments section down below. As always, if you should have any questions about running a dual carrier setup on your iPhone, don’t hesitate to ask and we’ll do our best to reply.