T-Mobile is known for shaking things up when it comes to wireless carriers. And today it looks like the magenta network is doing it yet again as it unveils a brand new plan for interested customers.

The new plan is called Magenta MAX, and it offers quite a bit under that loaded title. First and foremost, it’s all about premium data. T-Mobile says the new plan offers truly unlimited “Premium Data” for your smartphone, which includes both 4G and 5G network connectivity. The carrier says that no matter how much data you use, if you’re using the Magenta MAX plan your speeds will not be slowed down.

To drill that point home, T-Mobile is also offering premium streaming with the new plan. That means folks can stream up to 4K resolution while they are out and about, connected to the T-Mobile network. The new MAX plans also offer Netflix On Us, T-Mobile’s perk for gifting a Netflix subscription to customers.

Legacy smartphone plans are built for lower capacity 4G LTE networks, so Verizon, AT&T and even T-Mobile’s unlimited plans allow providers to lower your network priority if you’ve used a massive amount of data, which means that you might hit speed bumps if the network gets congested. Verizon and AT&T market this as “Premium Data” and give most customers 50GB. But, there’s nothing premium about paying more for fast 5G that’s only in “some parts of some cities.”* Now we’re in the 5G era, and T-Mobile has lit up the highest-capacity 5G network available — a network so powerful it can start unleashing the power of 5G to deliver unlimited Premium Data.

Here’s how it breaks down, thanks to a nice graph. T-Mobile also introduced the new Magenta plan as well, which you can see compared to the Magenta MAX plan just below. 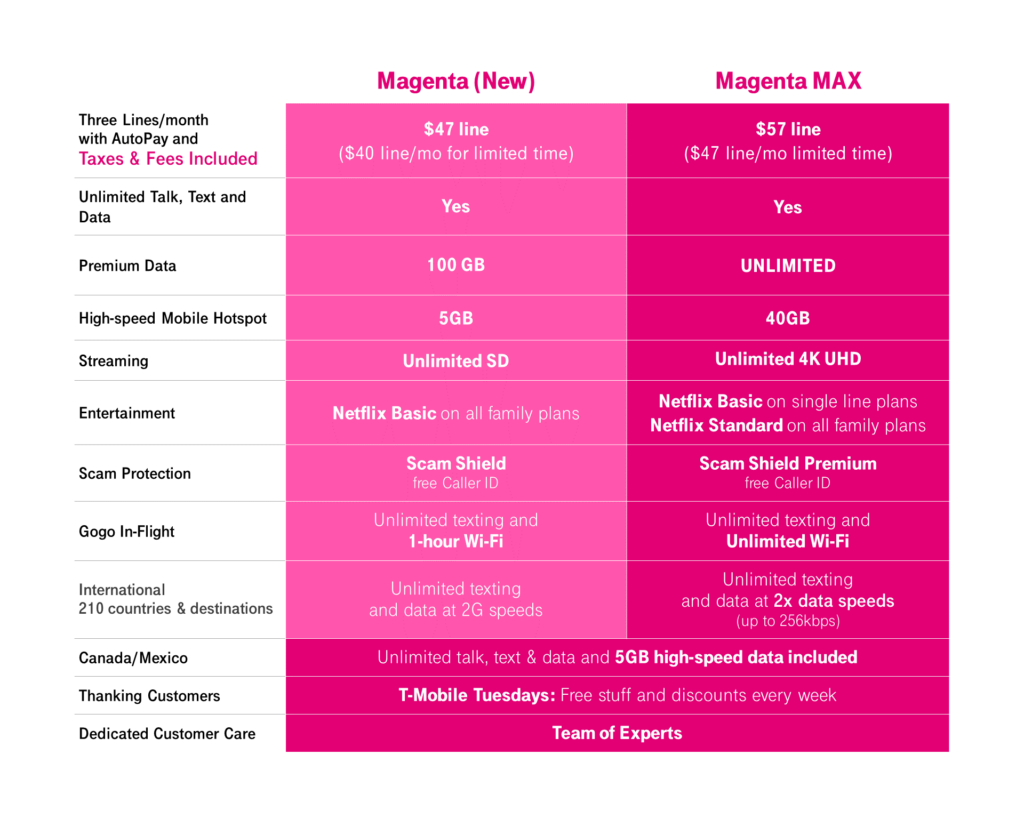 The basics are there, too, of course. You’ll get unlimited talk and text. There’s also 5GB of high-speed data when you’re roaming in Canada or Mexico. T-Mobile is offering unlimited Wi-Fi access when using Gogo In-flight internet. And T-Mobile Tuesdays, where customers get select freebies on a weekly basis, is also offered.

The new plan is available now for those interested. For current Magenta and Magenta Plus subscribers, T-Mobile says they can switch to the new plan and keep their devices, with no extra charges.