The jailbreak community has been on fire lately. Not only have all iOS & iPadOS 14.0-14.3 devices been made pwnable by both the tried and true unc0ver and brand new Taurine jailbreak tools, but the recent release of the kok3shi jailbreak made it possible for users of 64-bit iOS 9.3-9.3.5 devices to pwn their handsets as well.

Now, it seems a little more love is being provided for iOS 10 users as the Athenus Dev Team and w212 have teamed up to release ap0110, an auto-executing semi-untethered jailbreak for 32 and 64-bit iOS 10.x devices.

The release was announced at midnight last night via the Athenus Dev Team’s Twitter page, a fabulous way to start off this exciting Easter weekend: 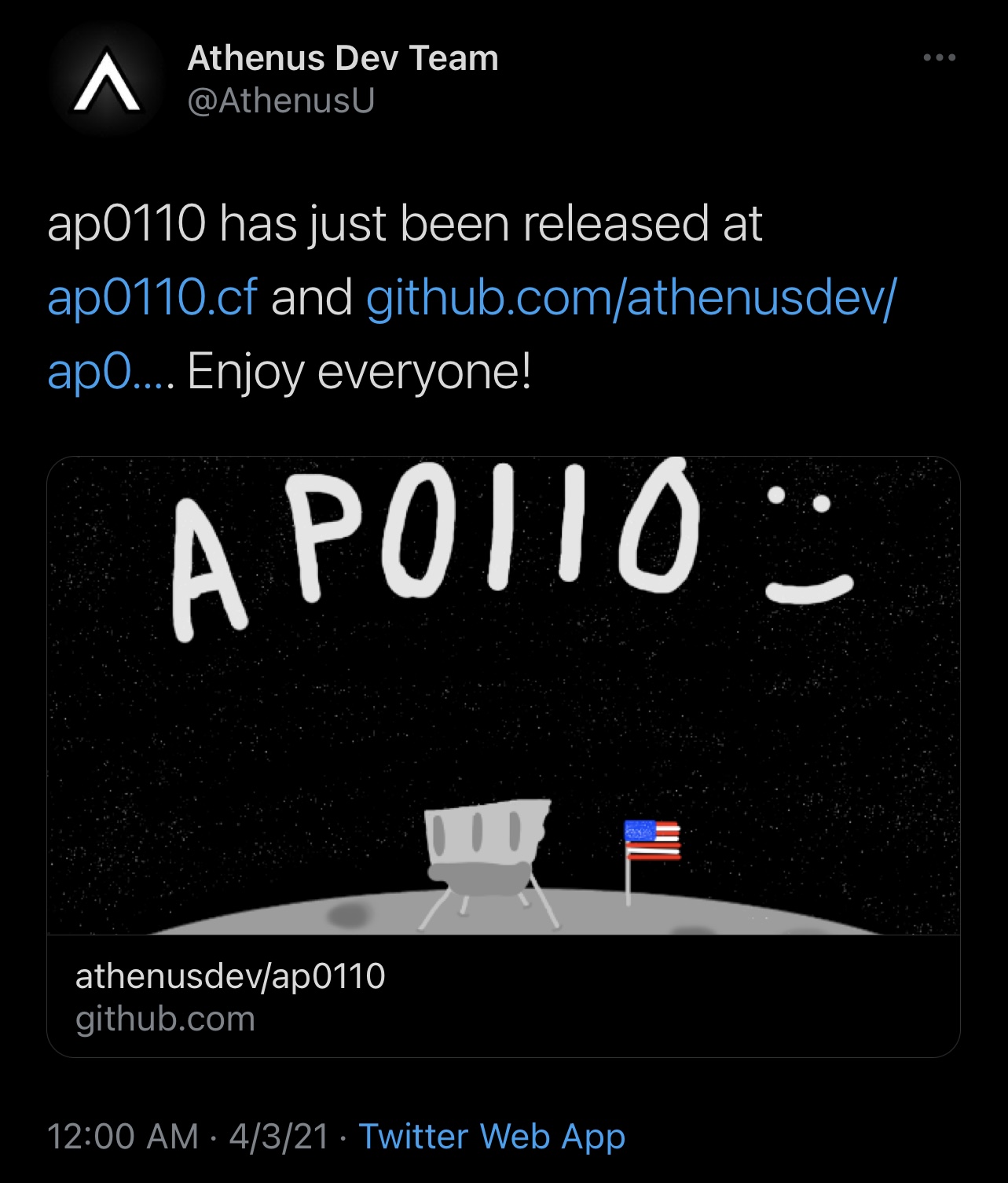 The most interesting part about the ap0110 jailbreak is its “auto-executing” tidbit, and we’ll explain why below.

Whether you’ve been perusing /r/jailbreak over the past several weeks or reading into discussions made in the Sileo / Taurine / Odyssey Discord channel, you might’ve caught wind about the imminent release of an “untethered”-like jailbreak. This is effectively that jailbreak, but it’s important to note that it’s NOT untethered.

The ap0110 jailbreak is a semi-untethered jailbreak just like all other releases in recent memory including Chimera, Odyssey, Taurine, and unc0ver to name a few. This means that ap0110 still must still be side-loaded to the device and must be re-signed over and over again after it expires (usually after 7 days, unless you have a paid developer account).

If the ap0110 jailbreak were truly “untethered” as much of the unofficial talk on jailbreak-centric message boards and chat rooms before its release would have you believe, then the jailbreak app would not need to be deployed again after rebooting your device. But since it needs to be, it’s still just a semi-untethered jailbreak tool, albeit with an interesting new auto-deploying aspect.

So now that we’ve cleared the water about the type of jailbreak ap0110 is, we can talk more about who it’s tailored for.

Citing the official ap0110.cf website, the ap0110 jailbreak supports both 32 and 64-bit iOS 10.x devices. Furthermore, the work appears to be published on GitHub for those interested in learning more about how it works. According to both the primary website and the GitHub page, the ap0110 jailbreak has been tested by its developers on the following device and firmware combinations:

Obviously, it should also work on other 32 and 64-bit iOS 10 devices… the ones above are merely the ones that the developers had available to test with.

We should also note that side-loading the ap0110 jailbreak app will require you to make use of Apple’s Xcode development software on a Mac since AltStore and AltServer can only side load apps on devices running iOS 12.2 or later.

In our tutorial showcasing how to install the unc0ver jailbreak on your iPhone or iPad via Xcode, we walk you through the process of signing the .ipa app and using Xcode to side load the app. This same steps used in the aforementioned tutorial can be applied to the ap0110 jailbreak, although you’ll be substituting the ap0110 .ipa file for the unc0ver .ipa file to do so.

Do you have plans to try the new ap0110 jailbreak tool with auto-execution on your iOS 10 device, or are already using a newer firmware? Let us know in the comments section down below.