It was only a couple of weeks ago that @ModernPwner released the cicuta_verosa kernel exploit for iOS & iPadOS 14.0-14.3. But as we noted in a follow-up piece, teams of use were limited to CoolStar for the upcoming Odyssey14 jailbreak and to GPL-compliant projects, which the unc0ver jailbreak is not.

While unc0ver lead developer Pwn20wnd has been particularly silent over the past several months, he broke that silence early Thursday morning upon sharing a series of Tweets that contained some particularly notable teasers about the state of an iOS & iPadOS 14-compatible jailbreak for all devices.

In those Tweets, Pwn20wnd reassured the jailbreak community that he hasn’t gone anywhere and team unc0ver had written its own kernel exploit based on CVE-2020-1798 (A.K.A. cicuta_verosa) for the unc0ver jailbreak instead of using the one that had been released to the public a couple of weeks ago: 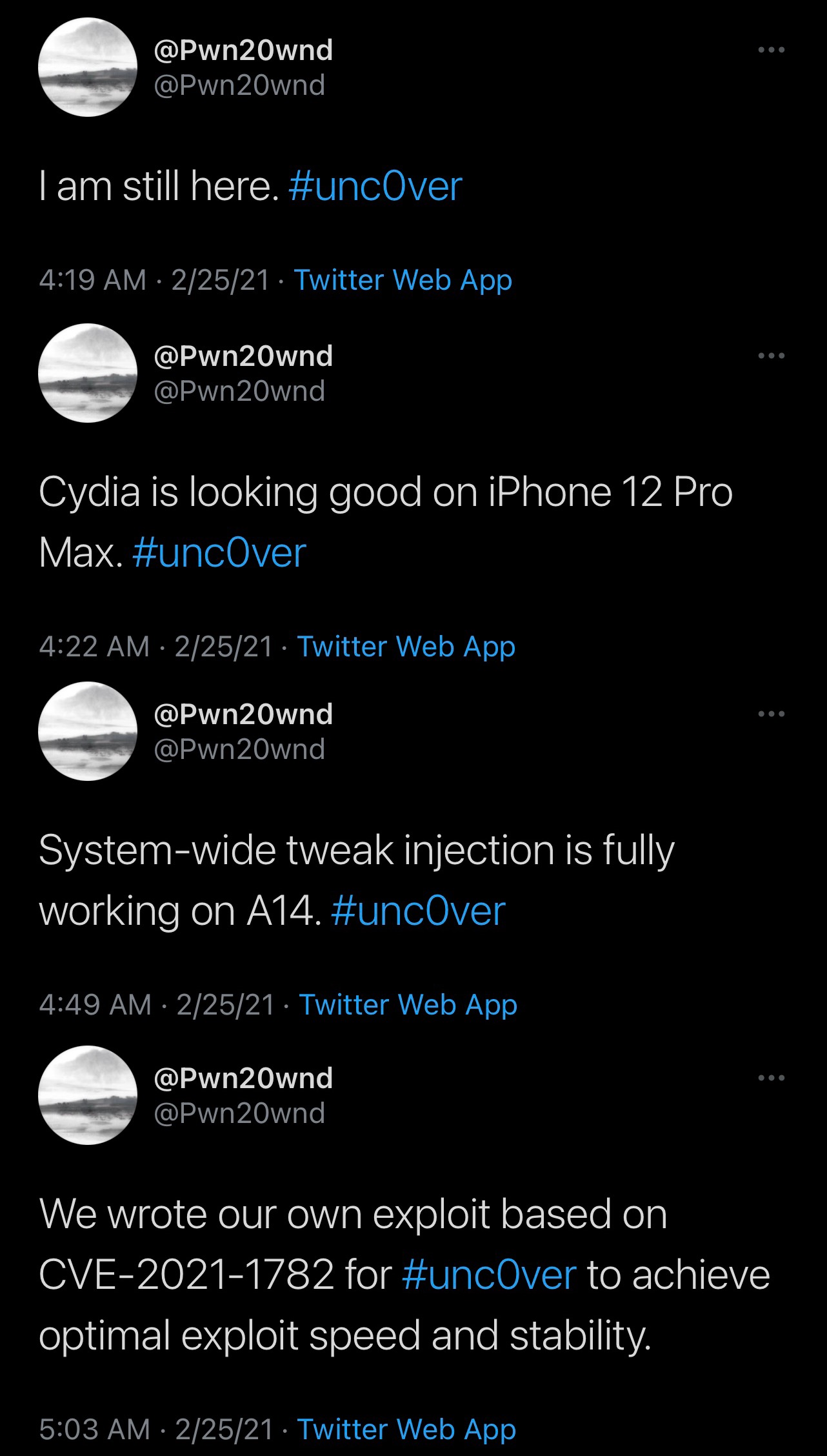 According to the teasers, team unc0ver kernel exploit is both performant and stable. Pwn20wnd added that system-wide tweak injection is working on iOS & iPadOS 14, likely via the new Substitute v2.0+ that launched at the start of the new year, and the hacker also teased that Cydia was “looking good” on the iPhone 12 Pro Max.

All the teasers appear to indicate that Pwn20wnd is already well into the development of a jailbreak for iOS & iPadOS 14, however it’s impossible to tell at this time just how complete it is or when it might launch to the general public.

For what it’s worth, however, there’s currently no ETA for the upcoming Odyssey14 jailbreak by CoolStar either. We just know that it’s in the works, much like unc0ver for iOS & iPadOS 14.

Whether you prefer Odyssey’s Sileo and libhooker ecosystem or unc0ver’s Cydia and Substitute ecosystem, the latest waterfall of announcements should excite you. They indicate that the hackers developing for the modern jailbreak community are both alive and well and still developing tools so that users can enjoy their handsets in a rightfully open and unrestricted manner as they see fit.

Will you be using the Odyssey14 or the unc0ver jailbreak when it comes time to jailbreak iOS or iPadOS 14? Let us know in the comments section down below.