The checkra1n jailbreak tool is renowned for its use of a powerful bootrom exploit called checkm8, which can’t be patched by Apple via a software update because the exploit exists in the hardware of devices equipped with A7-A11 processors.

The checkra1n team initially released the checkra1n jailbreak as a macOS-only application in 2019, and it wasn’t until a good bit into 2020 that the tool picked up support for Linux. As for Windows, the checkra1n team planned to support it, but to this day hasn’t implemented official support in a public release. So what’s the hold up, exactly?

The last time we heard any leads about the progress of checkra1n on Windows, it was understood that porting everything to the Windows platform would be insanely complicated, especially with respect to the USB connection required to jailbreak the device. Given that we still don’t have an official Windows-compatible checkra1n jailbreak tool today, we can only imagine that those complications weren’t overstated…

Just this week, however, a spark reignited the flame of hope after checkra1n developer Dany Lisiansky (@DanyL931) shared screenshots of a checkra1n program user interface on Windows 10 in a Twitter conversation with esteemed developer Steve Troughton-Smith. Predictably, the Tweet captured the attention of avid jailbreakers and rapidly developed into a full-blown post on /r/jailbreak. 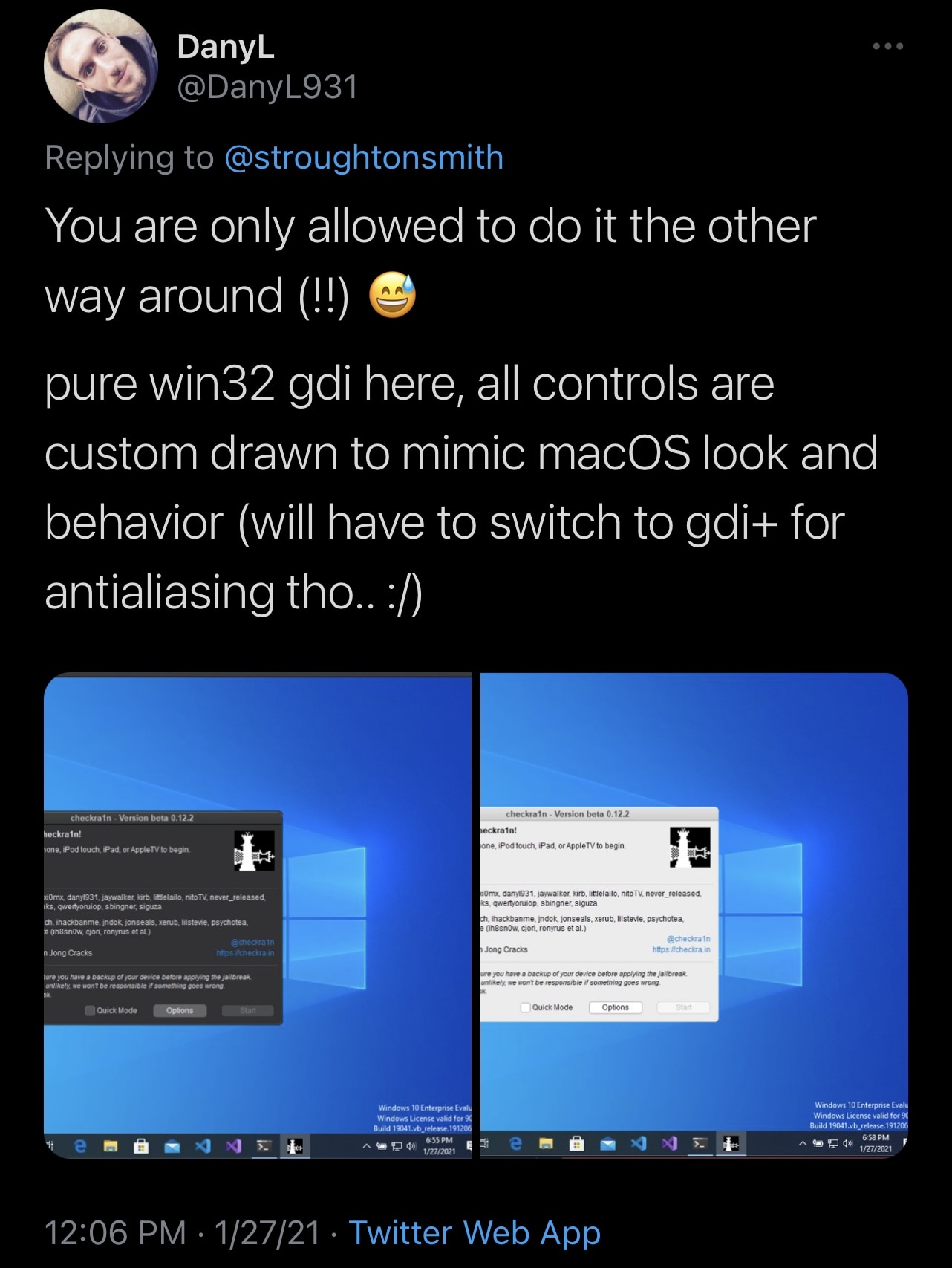 The screenshots depict the start screen of the checkra1n jailbreak on Windows 10 with both dark mode and the default light mode enabled. The interface looks nearly identical to what you’d see if launching checkra1n on a Mac. None of the screenshots actually show the jailbreak process occurring on Windows, however, which begs the question: Is checkra1n for Windows finally coming together?

Skeptical, we reached out to DanyL on Twitter to find out more, and from what we learned, the screenshots pictured depict a partially functional port of the checkra1n jailbreak on Windows 10. Take note of the word “partially” there, as this indicates that checkra1n for Windows still isn’t complete, despite looking like it could be nearly finished.

DanyL also reassured me that checkra1n for Windows is still very much a work in progress, and that there was still a lot of work to be done before it would be ready for the general public. As such, no ETA could be provided.

For those wondering, it is possible to jailbreak a compatible device with checkra1n using a Windows PC, however this method isn’t officially supported by the checkra1n team and doesn’t receive updates as frequently. What’s more is that methods like these actually tap into Linux to get the job done, despite operating from a Windows PC. We don’t necessarily recommend this method, but it is an option if you ever find yourself in a pickle and have no other option available to you.

As of right now, Windows users who are hopeful for a checkra1n jailbreak tool to be made available for their PC may still have a while to wait. On the other hand, rest assured that it’s being worked on.