The checkra1n team updated the checkm8 bootrom exploit-based checkra1n jailbreak tool to version 0.9.8 beta on Wednesday with a plethora of changes, including full-fledged Linux support for the very first time.

The exciting announcement was shared early this morning in a Tweet shared via Twitter, which revealed only a small amount of context: 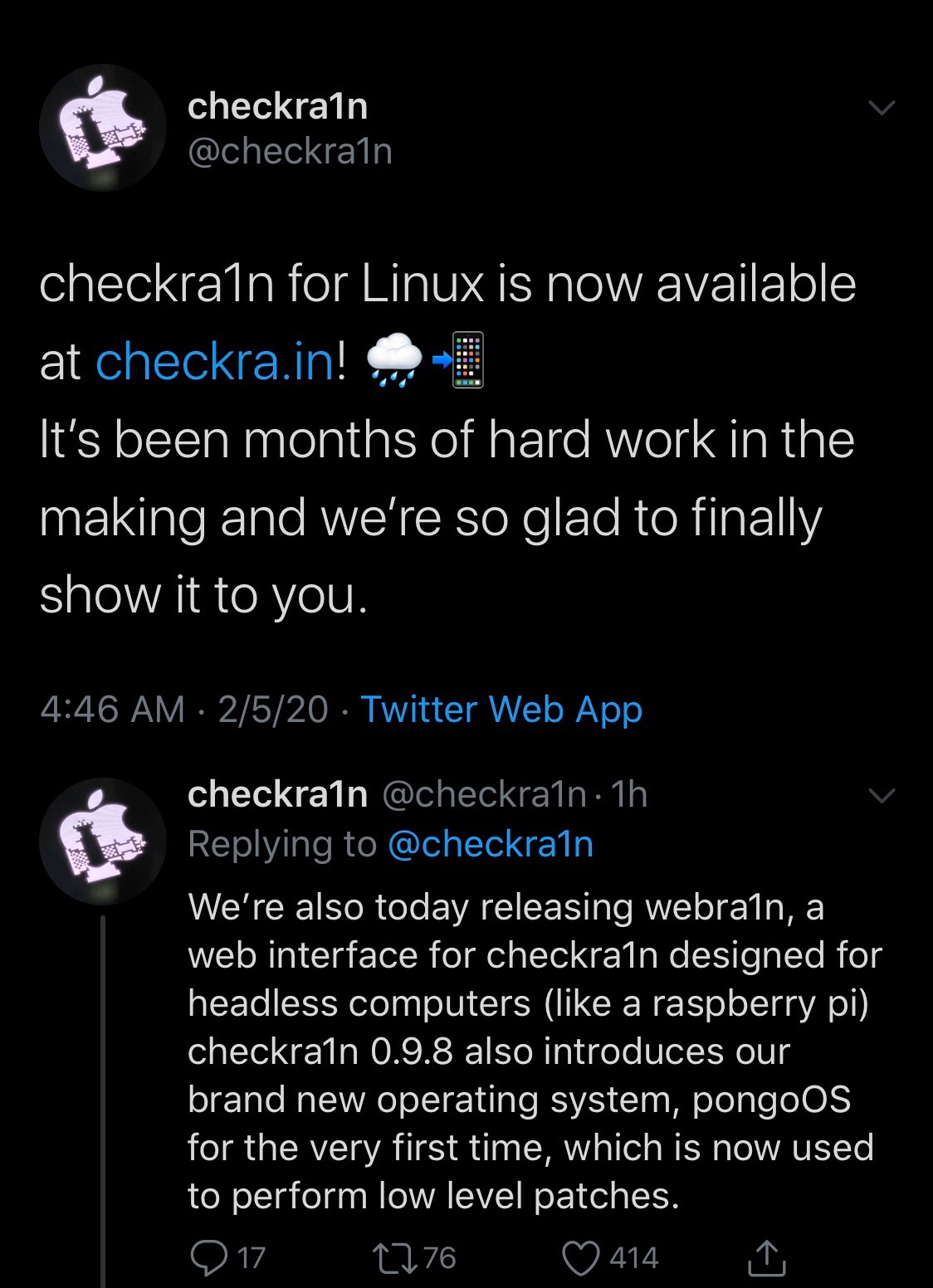 The full change log for this release per the official checkra1n web page is as follows:

– This release squashes so many bugs we couldn’t keep track of them. Sorry bugs…

– Support for Linux has arrived!
– Introduces webra1n.
– Low-level patching is now handled by our all-new pongoOS, engineered from the ground up for flexibility. More news on this front soon!
– Adds a whole new CLI, built around ncurses, which now supports FastDFU.
– Adds a new –version flag to the CLI for debugging purposes.
– Adds a new option in the GUI and CLI which allows for custom boot-args to be set.
– Adds an option to skip version checking for new iOS and iPadOS versions which haven’t yet been officially tested.
– Added support for iOS and iPadOS 13.3.1.
– The checkra1n app no longer requires internet to open.

If you’re using a Windows computer, then the new Linux support is great news because it’s free and easy to install on any partitioned PC. Moreover, the checkra1n team is kicking off something called webra1n, which is a web-based version of checkra1n that can be deployed on headless computers such as those based on raspberry pi.

This is the first checkra1n release which adds support for Linux. More information on installing the Linux version can be found here.

– The exploit may not work as reliably on some devices, such as the Raspberry Pi Zero and Raspberry Pi 3.
– When trying to jailbreak multiple devices, only the first attempt will succeed. Workaround: relaunch checkra1n after every jailbreak attempt.

Webra1n is an experimental web based UI for checkra1n, broadcasting ncurses – the terminal based ui – right to your browser and allowing headless devices (such as the Raspberry Pi) to present an interface over the network.

We advise to use it locally or behind a password protected Wi-Fi network/proxy.

This beta is only available for macOS and Linux. Work is ongoing to support Windows, which will be added in a later release.

Another notable change includes preliminary support for pongoOS, something that Luca Todesco has shown to enable Linux booting on iOS devices. The checkra1n team provides few details in this department for the time being, but more details will be coming soon.

Checkra1n v0.9.8 also gives the jailbreak tool a brand-new command line interface (CLI) built with ncurses and FastDFU. The app now officially supports iOS and iPadOS 13.3.1 and now also supports skipping the iOS version check when jailbreaking so that you don’t have to wait for the checkra1n team to jailbreak newer releases of iOS (please note that jailbreak tweak compatibility with newer firmware releases is a different story).

If you haven’t already, you can download the latest version of checkra1n from the official checkra1n website. You can also use our step-by-step tutorial to get jailbroken with checkra1n on a compatible device.

Are you excited about the changes in this update? Let us know in the comments.