When most people think of a jailbreak tool like checkra1n, among the first things that come to mind are iPhones, iPod touches, iPads, and Apple TVs. Interestingly enough, the checkra1n team has shown time and time again that the checkm8 bootrom exploit that powers this particular jailbreak is commanding enough to hack even some of the most arbitrary of things, including Apple’s T2 chip, which resides in a variety of Macs.

On Thursday, we learned that even Apple’s HomePod Smart Speaker devices are susceptible to the checkra1n jailbreak. The news, first shared this afternoon by Twitter user @_L1ngL1ng_, took many avid jailbreakers by surprise: 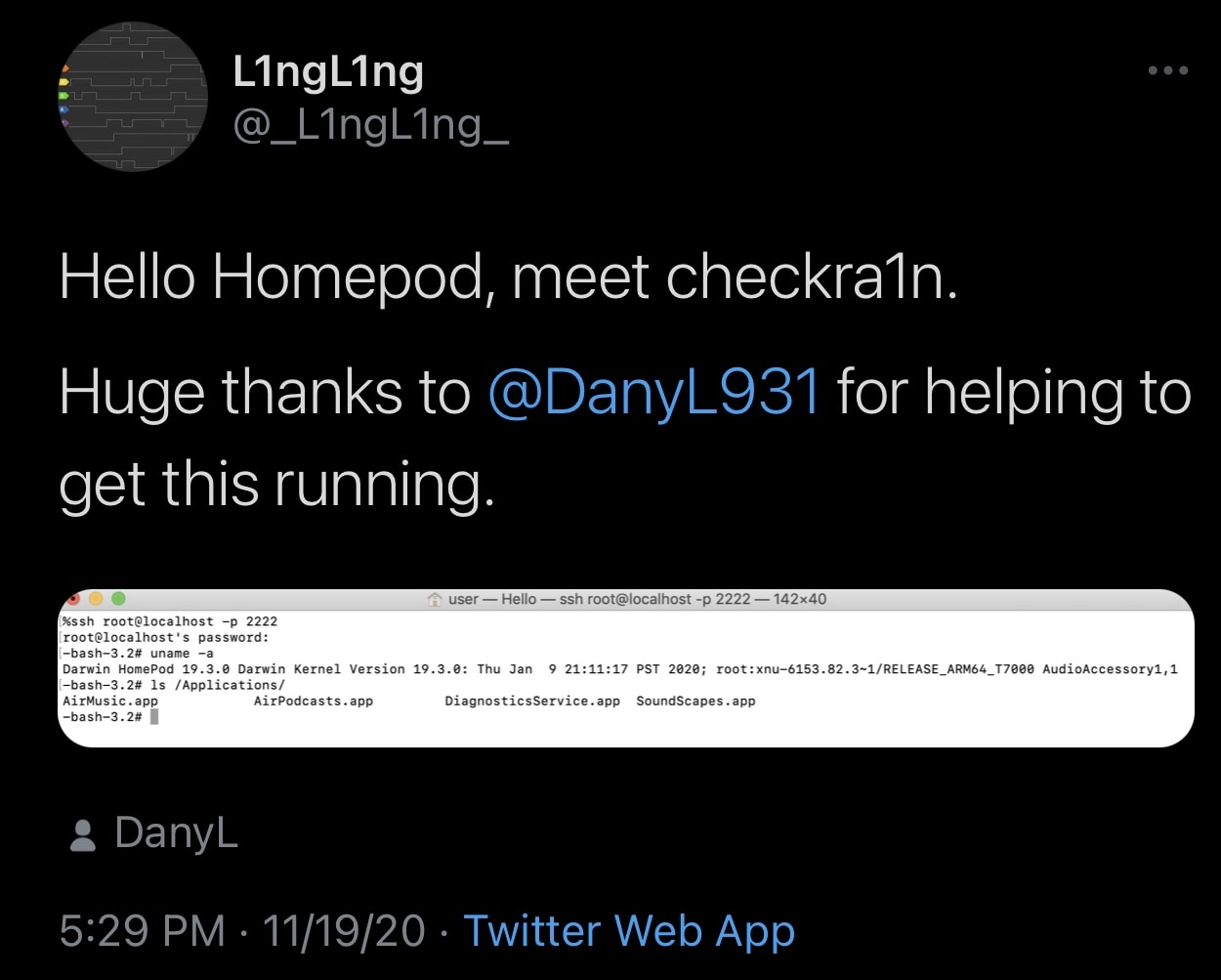 In the Tweet, we can clearly see a screenshot of a macOS Terminal window in which the command line text suggests successful root access to the HomePod in question via a secure shell (SSH) connection. Notably, the command line text also indicates that this is a first-generation HomePod (identified as AudioAccessory1,1,) and not Apple’s new HomePod mini (which would be identified as AudioAccessory5,1).

Additionally, @_L1ngL1ng_ is seen crediting checkra1n team member @DanyL931 in the Tweet for his help in making this achievement possible.

Impressive indeed, but the novel feat certainly raises a lot of questions about what would be possible with a jailbroken HomePod device. In an /r/jailbreak thread regarding the news, commenters threw around some ideas that included, but weren’t limited to:

For what it’s worth, the aforementioned bullet points are just ideas and aren’t representative of what might actually be possible with a jailbroken HomePod. For all we know at this time, most (if not all) of the above may not even be possible, but it can be nice to dream…

It remains to be seen whether the checkra1n team will integrate this functionality into its jailbreak in another upcoming update, but given that they’ve already added support for the Mac’s T2 chip despite how few users actually take advantage of this feature, it doesn’t seem too far out of the question.

Would you rush to jailbreak your HomePod, or are you like me and haven’t even bothered to pick one up? Let us know in the comments section below.