If you’ve poked your nose in the jailbreak community’s trending news lately, then you’ve undoubtedly caught wind about a developing jailbreak for iOS 13.5-13.7 devices. Software security researchers associated with FreeTheSandbox first announced plans to release such a jailbreak at the end of September, and there have been a number of other teasers since then.

Just this afternoon, the @FreeTheSandbox Twitter account generated more excitement among jailbreakers after it turned to the community in search of potential testers. The Tweet, shown below, appeared seek users of certain types of devices running iOS 13.5.1 through 13.7, as these will be the handset and firmware combinations that the jailbreak supports when released. 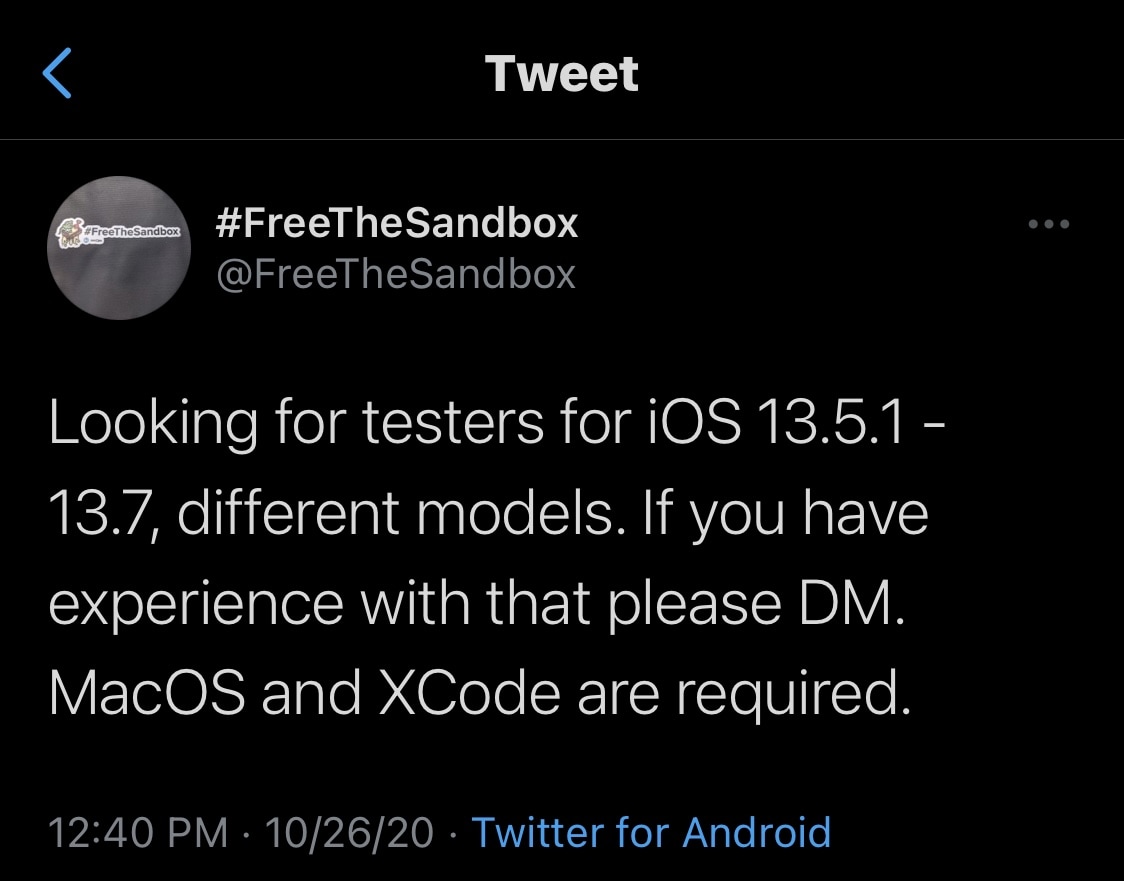 As you might come to expect however, not just anyone would qualify to become a tester. Someone with experience with jailbreak testing would obviously be preferred over someone without it. On top of that, access to a Mac with Xcode installed would also be required. Those meeting these criteria have been asked to DM the @FreeTheSandbox Twitter account to discuss details.

It’s somewhat uncommon for jailbreak developers to ask the community for help in testing an unreleased jailbreak, but it’s certainly not unprecedented. In many cases, testing is performed in a closed beta before an open beta, just to ensure jailbreak stability before outwardly pushing a release to the masses.

We still don’t know exactly when this jailbreak will be released, but it seems likely that it will most likely drop before the end of this year. When this happens, it will become the first public jailbreak to support iOS 13.5.1-13.7 on all devices, as the hardware-based checkra1n jailbreak only supports these versions of iOS on handsets from the iPhone 5s to the iPhone X (A7-A11).

Given that FreeTheSandbox is looking for testers right now, just a small amount of deductive reasoning would suggest that the team already has a working build ready, even if not yet fully complete. This could mean that the jailbreak would only need a few more bug fixes and stability improvements before being ready for the general public. Again, this is only speculation.

Are you excited that a new jailbreak tool appears to be just over the horizon? Discuss in the comments section below.