The only iOS & iPadOS 14 devices that can be publicly jailbroken at the time of this writing are those sporting A9 and A9X processors, and while that could change in the very near future as the checkra1n team works on adding A10 and A10X support, the bigger question involves the likes of much newer devices that aren’t even susceptible to the checkm8 bootrom exploit.

Fortunately, renowned hacker and checkra1n team member Luca Todesco shared a particularly interesting announcement via Twitter Monday afternoon in the form of what appears to be a working exploit and PAC bypass for iOS & iPadOS 14 devices: 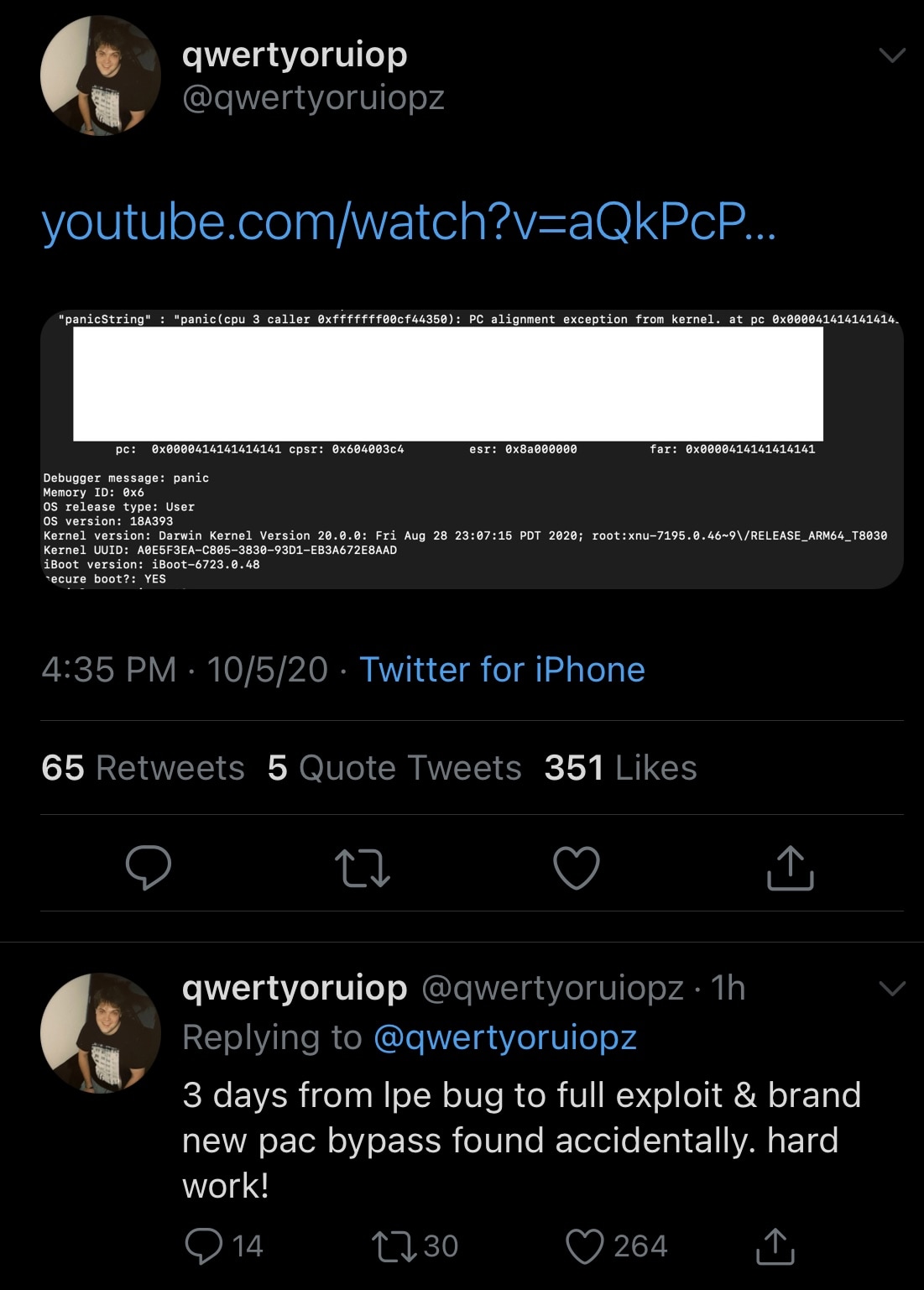 In a follow-up Tweet, Todesco says it only took him three days to get from a local privilege escalation (LPE) bug to a full-blown exploit and PAC bypass, which were discovered entirely by accident with a bit of hard work.

As if the mere idea of a working exploit and PAC bypass for iOS & PadOS 14 weren’t captivating enough, the screenshot example shared by Todesco displays pertinent information about the his device setup, which appears to encompass an A13-equipped handset running iOS 14.0.1 (build 18A393) – the latest version of iOS and iPadOS as of right now.

Unclear from the details posted above is whether or not Todesco will release the exploit to the general public for use in jailbreak tools. For what it’s worth, Todesco has created tfp0 exploit-style jailbreaks in the past (remember Yalu?), but the hacker more recently picked up involvement with the bootrom-based checkra1n jailbreak.

Given the aforementioned circumstances, one of three things could happen: 1) Todesco could keep the exploit for himself for research purposes; 2), Todesco could release the exploit for the Oydssey and unc0ver teams to incorporate; 3) Todesco could use this exploit to create a jailbreak of his own. Which of these will happen is anybody’s guess, but we assume Todesco will share updates regarding his intentions at some point.

In any case, this is excellent news for the jailbreak community because it’s yet another of several exploits teased for iOS & iPadOS 14 that could potentially pave the way for a future jailbreak for Apple’s latest and greatest mobile operating system. With that in mind, optimism may be warranted, but taken with a grain of salt.

Are you inspired by Todesco’s recent teaser? Let us know your thoughts in the comments section below.