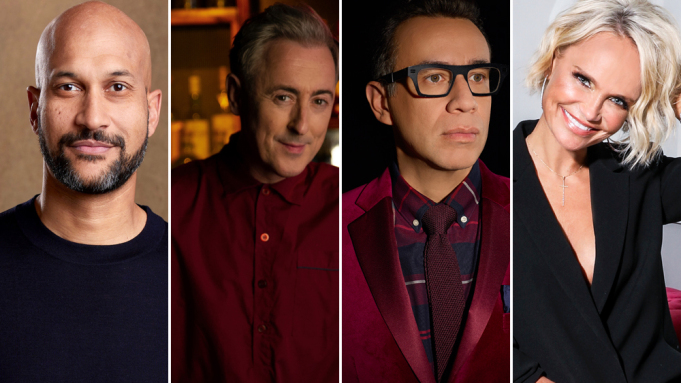 Ensemble casts can make a project stand out all on its own, and this is certainly one of those times.

According to the original report, the musical comedy series doesn’t have a title just yet. However, the story revolves around a couple on a backpacking trip meant to reinvigorate their relationship. On that trip, the couple stumbles upon a small town called “Schmigadoon”, and the citizens there constantly act like they are living in a studio musical set in the 1940s. The couple gets stuck in this town, and they won’t be able to leave until they discover “true love”.

Here’s the cast and who they are playing:

Key will play Josh, Melissa’s (Strong) long term, pragmatic partner, and the last person who wants to be stuck in this magical town. Cumming is Mayor Menlove, the welcoming mayor of the town with a secret (and a song) in his heart. Armisen plays Reverend Layton, the mild-mannered religious leader of the town. Chenoweth is Mildred Layton, Reverend Layton’s morally superior wife who is in everybody’s business. Tveit plays Danny Bailey, the town bad boy who is trouble with a capital T, especially once he sets his sights on Melissa. Cameron is Betsy, the farmers daughter who instantly falls for Josh. DeBose portrays Emma Tate, a more modern woman and the town’s teacher, she struggles to fit into the town’s strict mold. Camil plays Doc Lopez, the handsome town doctor with an icy heart. Krakowski plays The Countess, a stunning and sophisticated woman determined to marry Doc Lopez. Harada is Florence Menlove, the oblivious and dutiful wife of Mayor Menlove.

This comedy series is written by Cinco Paul and Ken Daurio (Despicable Me), with Paul also serving as show runner and writing all of the original songs.

No word on when this one will see the light of day on Apple TV+, but this may pop up sooner rather than later on the streaming service.

What do you think of the plot and this cast? Will you be checking it out whenever it does premiere on the streaming service?