iOS and iPadOS 14 have only been out for one week, but that hasn’t stopped jailbreak hopefuls for questioning when a universal jailbreak might launch with support for the two. Although the checkra1n team recently announced iOS and iPadOS 14 support for A9 and A9X devices with expected support for A10 and A10X in coming weeks, any and all newer devices are left out in the cold in this regard.

While no jailbreak team has outright stated that they would be taking on the burden of developing a universal iOS and iPadOS 14 jailbreak, some good news is that @ZecOps could be preparing to release a kernel-level local privilege escalation (LPE) that supports iOS and iPadOS 14. The announcement was shared via Twitter just this Wednesday afternoon: 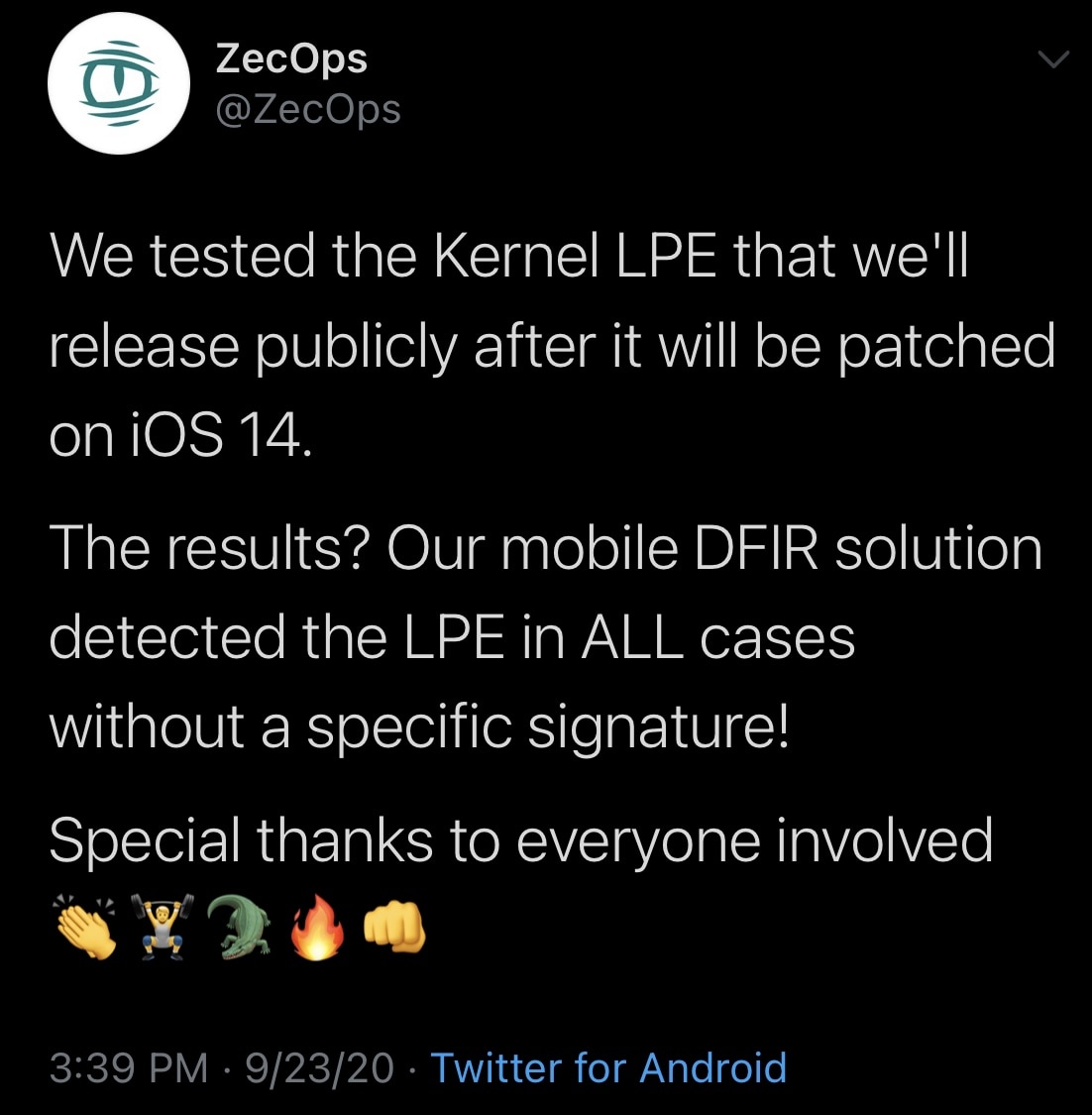 Based on the information provided in the Tweet, @ZecOps will release the LPE after Apple has patched it in iOS 14, which could be as soon as the next major update that Apple has already seeded to developers for beta testing – this is only speculation, of course.

Assuming the right hacker gets their hands on @ZecOps’ LPE after being launched, it’s possible that it could be augmented into a full-fledged exploit that could aid in the development of a new iOS 14-centric jailbreak tool (or possibly an update to an existing jailbreak tool). Whether this will happen or not still remains to be seen.

For those who’ve never heard of @ZecOps before, it should be noted that they have a record of developing security vulnerabilities in the past. One of the more recent examples involved a tfp0 proof of concept teased just under a year ago. The historic track record adds credibility to the claim.

As of right now, we wouldn’t recommend that those happily jailbroken on iOS or iPadOS 13 upgrade to iOS or iPadOS 14, as there’s still no guarantee that a jailbreak will materialize as a result of this LPE. Furthermore, Apple stopped signing iOS 13.7 earlier this week, so there wouldn’t be a way to get back to iOS 13 if you upgrade and regret it later on.

If you’re already on iOS 14, however, then it’s at least something to lighten the mood if you want something to look forward to. Just remember not to hold your breath…

Would you jailbreak iOS 14 if a jailbreak became available for it? Let us know in the comments section below.