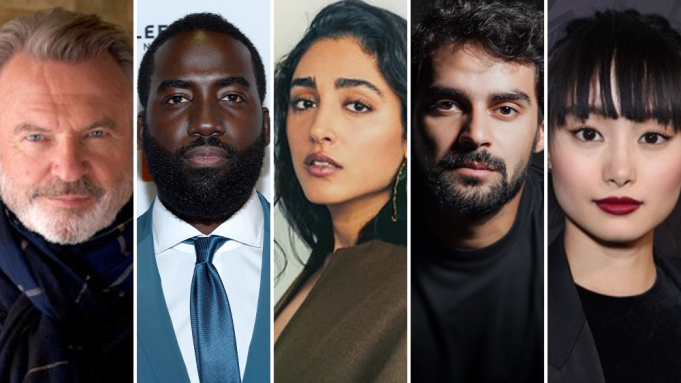 It has been some time since we last heard about Simon Kinberg’s and David Weill’s epic sci-fi drama series for Apple TV+, but now we have something to look forward to.

According to Deadline, the upcoming sci-fi series from Kinberg and Weill restarted production a week ago in Manchester, England. Both Kinberg and Weill are writing the series, as well as serving as executive producers. The report also reveals the name of the upcoming epic drama series: Invasion. Which is apt, because apparently the upcoming show will deal with an alien invasion.

This series was first reported on earlier this year, but at the time there wasn’t much known about the project. Even the title was a mystery. Now, with this report, we not only get the title and the gist of the plot, but also the cast.

Leading the show will be Sam Neill (Jurassic Park, Jurassic World: Dominion). From there we have Shamier Anderson (Awake), Golshifteh Farahani (Extraction), Firas Nassar (Fauda), and Shioli Kutsuna (Deadpool 2). The new series is billed as a “character-driven” show, but this has always been a large-budget project, so there will likely be plenty of explosions and action, too.

It’s also being filmed all around the globe:

One of Apple’s most ambitious original series to date, Invasion is designed to film in four locations on four continents: New York in the U.S. as well as UK (Manchester), Morocco and Japan. Portions of the series had been shot in New York and Morocco, and producers were prepping for the UK shoot when the coronavirus-related industry shutdown started in mid-March.

Production on projects like this are restarting in light of the coronavirus pandemic shutting them down earlier this year. One of the first Apple TV+ projects to restart production not too long ago was For All Mankind.

Jakob Verbruggen will be directing the series, as well as an executive producer.

No word yet on when Invasion will debut on Apple TV+, but with production just now getting restarted, it might take some time.