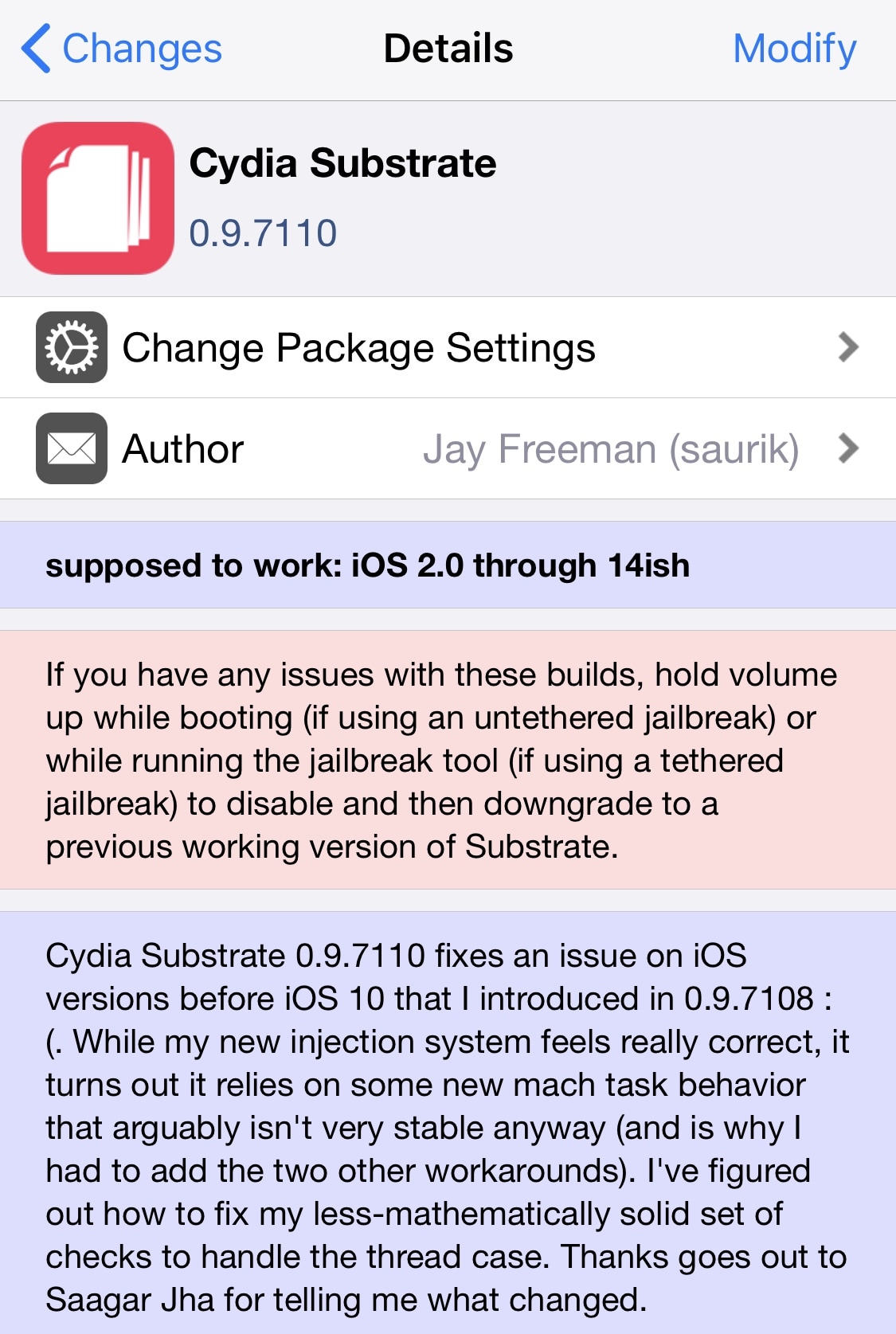 Following a chain of recent updates to the Cydia Substrate package this past weekend, Saurik issued yet another update late last night with notable bug fixes and changes. The latest update brings the tweak injection method up to version 0.9.7110.

The change log comments via Cydia Substrate’s official package depiction are particularly extensive for this release, and are as follows:

Cydia Substrate 0.9.7110 fixes an issue on iOS versions before iOS 10 that I introduced in 0.9.7108 :(. While my new injection system feels really correct, it turns out it relies on some new mach task behavior that arguably isn’t very stable anyway (and is why I had to add the two other workarounds). I’ve figured out how to fix my less-mathematically solid set of checks to handle the thread case. Thanks goes out to Saagar Jha for telling me what changed.

Notably, this build is thereby a lot more like 0.9.7107 in behavior, particularly around the one place in the code where something can end up doing a live-lockable spin loop (which is the sort of thing that could cause “the phone is getting hot and it is using a lot of battery”, which a handful of people are still reporting on 0.9.7109); to the extent to which people have had problems with 0.9.7108 and 0.9.7109, I will thereby hope that 0.9.7110 helps.

While working on this update, I also determined Substrate wasn’t working correctly on boot of an untethered exploit while testing on iOS 9. While the current distribution channel for Substrate (via Sam) doesn’t go to anyone using versions of iOS older than 10 or 11 or so (which should both work), this was annoying, and maybe applies to other untethered exploits, so I figured out a fix for that issue that seems stable? I’m definitely interested in issues.

The latest Cydia Substrate update seems to address a number of situational bugs for various firmware versions and jailbreak types that have been reported by community members. In fact, doing this apparently meant making Cydia Substrate behave more like it did in version 0.9.7107 because the new injection system wasn’t quite as stable or mathematically sound as Saurik initially presumed it would be.

Obviously, this update is recommended for all who use Cydia Substrate since it makes the package more stable and because it’s such a vital package in terms of jailbreaking in general. This is quite literally one of the most significant working mechanisms that powers jailbreak tweaks on supported jailbreaks. If you don’t see the update after opening your package initially, then you should try refreshing your sources.

Have you installed the latest version of Cydia Substrate yet? Let us know in the comments section down below.