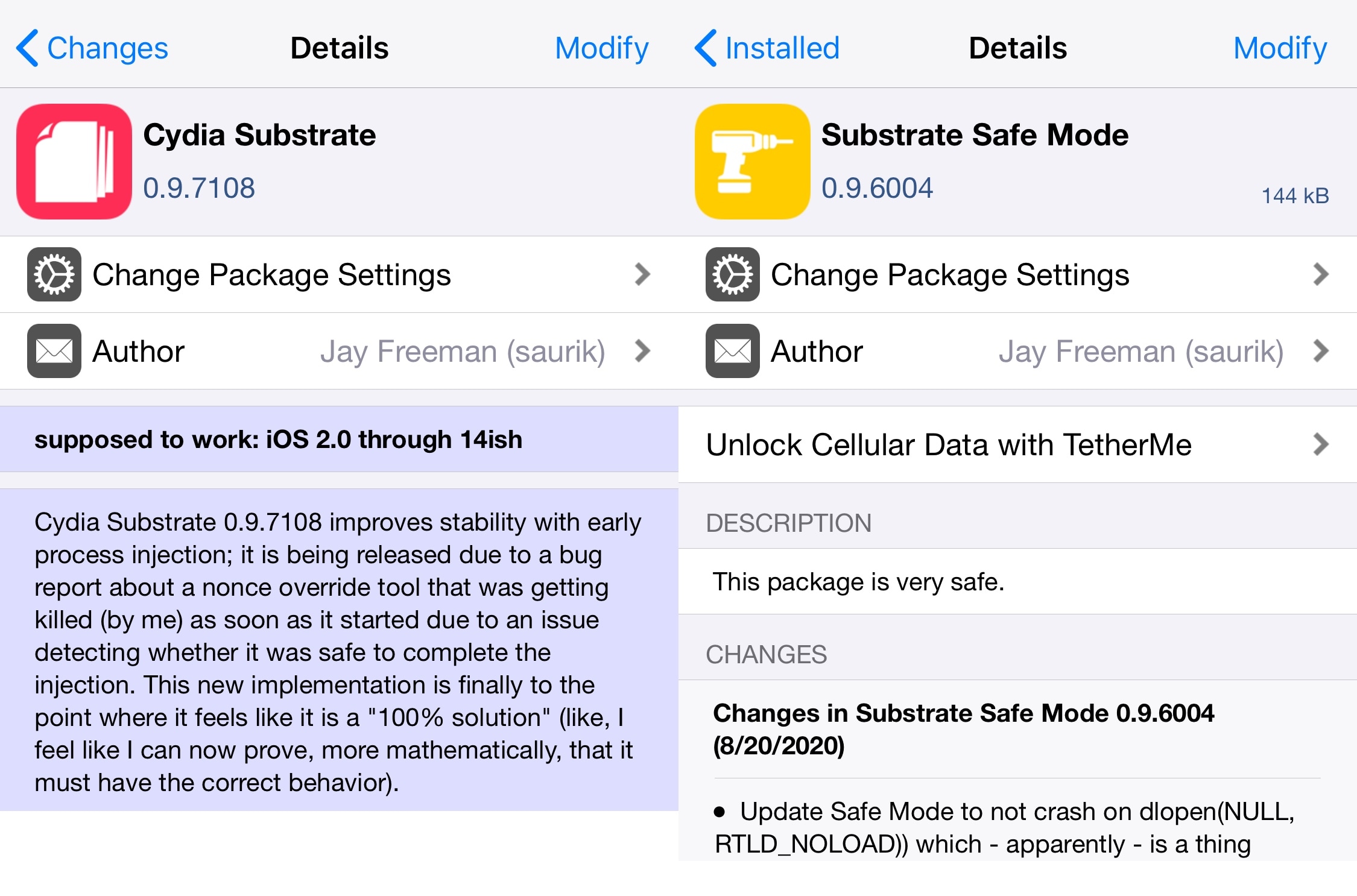 After a brief hiatus from last month’s rush of Cydia Substrate updates, Saurik appears to be at it again. Starting this morning, checkra1n jailbreak users should be able to refresh their sources and see two notable new updates including Cydia Substrate version 0.9.7108 and Substrate Safe Mode version 0.9.6004.

Both packages are especially important for the checkra1n jailbreak, as one drives tweak injection while the other serves as the last line of defense between jailbreak tweak failures and the possibility of a consequential boot loop. Fortunately, these packages work in tandem to permit jailbreak tweak usage in a safe environment.

Kicking off with the Cydia Substrate update, the change log for version 0.9.7108 is as follows:

Cydia Substrate 0.9.7108 improves stability with early process injection; it is being released due to a bug report about a nonce override tool that was getting killed (by me) as soon as it started due to an issue detecting whether it was safe to complete the injection. This new implementation is finally to the point where it feels like it is a “100% solution” (like, I feel like I can now prove, more mathematically, that it must have the correct behavior).

As for the Substrate Safe Mode package, the change log for version 0.9.6004 can be found below:

Update Safe Mode to not crash on dlopen(NULL,RTLD_NOLOAD)) which – apparently – is a thing.

As it would seem, this update resolves a crash that could have previously occurred while using Substrate Safe Mode.

If you’re using either of these two packages on your jailbreak, then it’s obviously advised that you should update them at your earliest convenience. They should appear automatically for you upon refreshing your sources as long as you’re using a compatible jailbreak, such as checkra1n.

While the unc0ver jailbreak once took advantage of Cydia Substrate and the likes, lead developer Pwn20wnd was eventually pigeon-holed into using Substitute instead since Cydia Substrate was never updated to support A12(X) and later devices. These updates also don’t apply to the Chimera and Odyssey jailbreaks, as these use an alternative method of tweak injection.

Have you updated Cydia Substrate and Substrate Safe Mode on your jailbroken device yet? Let us know how it went for you in the comments section below.