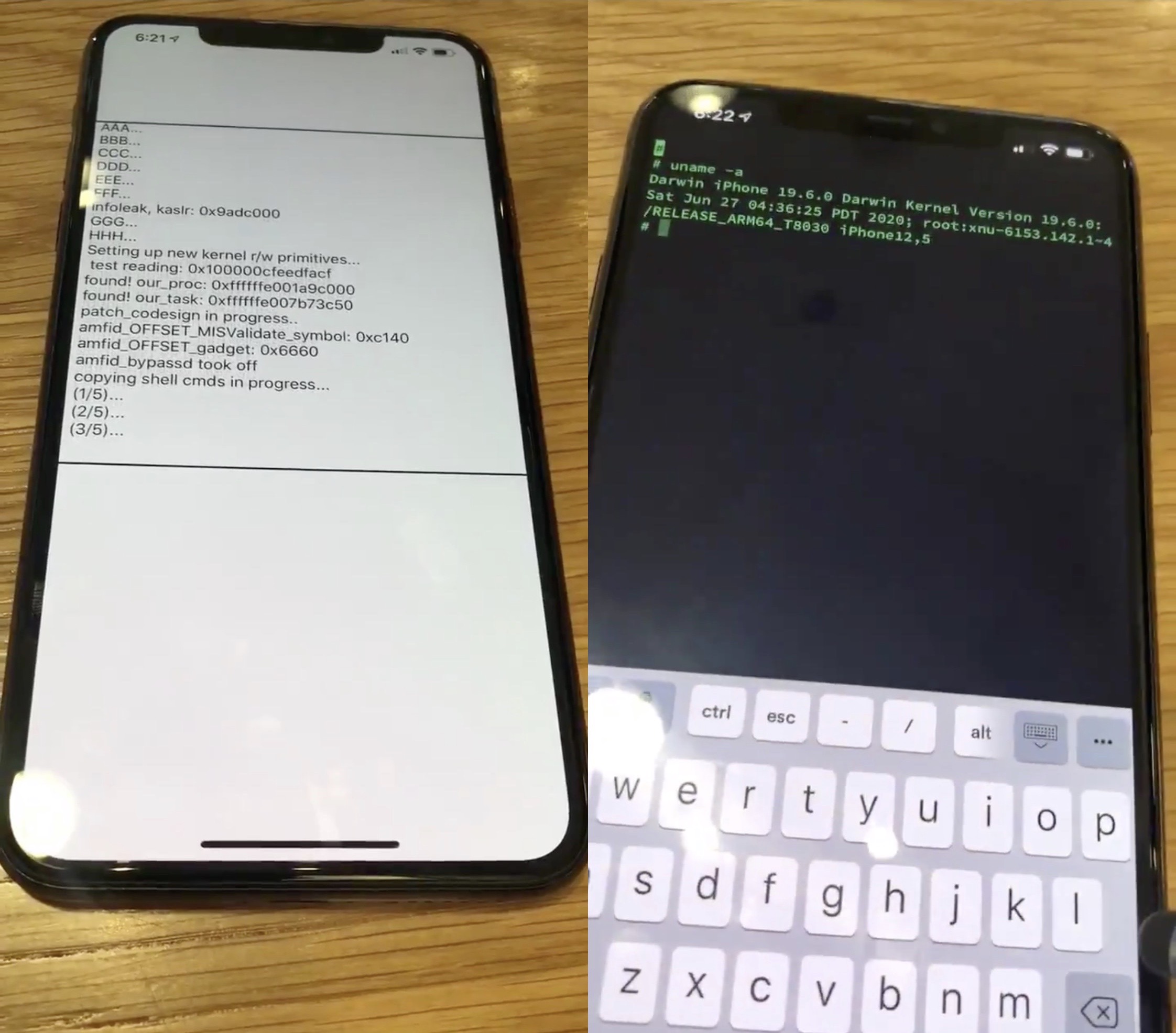 There’s some potentially exciting news for the jailbreak community this weekend after hacker and security researcher @08Tc3wBB teased what appears to be a newfangled approach to exploiting the latest public release of iOS on one of Apple’s current-generation iPhones.

Citing one of @08Tc3wBB’s latest Tweets, it would appear that the hacker successfully pwned an iPhone 11 Pro Max running iOS 13.6.1 without using a traditional tfp0-style exploit like those used in the majority of modern jailbreaks like Odyssey and unc0ver:

The Tweet includes a video demonstration of the exploit at work, including a working SSH demo shortly after the exploitation takes place.

From what we can gather, the primary takeaway from the new exploitation method is that it uses custom built kernel read/write primatives as opposed to grabbing the kernel’s task port as a commonly-used tfp0 or task_for_pid(0) exploit would. What’s more is that the hacker appears to have intentions to release the method in the future when “appropriate.” He finishes off the Tweet with the hashtag “JAILBREAK,” a sure-fire attention-grabber for jailbreak enthusiasts to say the least.

We can’t be too certain what the hacker means by “appropriate” in this context, but one can safely assume one of two potentials: 1) the hacker wants to clean his work up a bit more before releasing it; or 2) the hacker wants to wait until the public release of iOS 14 to see if the exploit still works on it and if it could benefit the jailbreak community.

For those exhibiting slight skepticism over the announcement and its trustworthiness, it’s worth noting that @08Tc3wBB has been at the forefront of jailbreak exploit teasers previously, with one of the most recent examples being in January and involving the third iOS 13.3.1 beta.

It’s also worth noting that both Pwn20wnd of the unc0ver Team and Luca Todesco of the checkra1n team follow @08Tc3wBB on Twitter and that checkm8 bootrom exploit developer @axi0mX retweeted the hacker’s recent claims, all of which seem to add credibility to the work.

It will indeed be interesting to see what becomes of the new exploit. If anything, it holds the potential to jailbreak Apple’s latest iteration of iOS 13 at the time of this writing, but we’ll of course be crossing our fingers with the hope that iOS 14 might also be affected.

Apple just recently released iOS 13.6.1 to the general public with a fix for a green-tinting display issue that many OLED display-equipped iPhone users had experienced over the past several software updates. Given the circumstances, many are antsy to update, and this new exploit method could be the catalyst that some avid jailbreakers need if released.

Are you excited about the latest exploit development and how it could potentially benefit the jailbreak community? Let us know in the comments section below.