Apple’s upcoming iOS & iPadOS 14 software updates aren’t slated to be released until sometime this Fall, but that hasn’t stopped prominent jailbreak community hackers from getting their hands dirty with the developer pre-releases and working their usual magic.

The first example of an iOS 14 jailbreak was shared by the checkra1n team mere days after Apple teased the update at WWDC 2020, but this was expected as checkra1n utilizes a hardware-based bootrom exploit that can’t be patched with a software update. Early this morning, however, the Pangu Team took the stage at Mosec 2020 to demonstrate a working jailbreak of their own on the iOS 14 platform.

The teaser, first Tweeted by renowned security engineer Min (Spark) Zheng, depicts an image from the presentation showcasing an interface that may look familiar to anyone that has used Pangu jailbreak in the past. The bold black and white interface sports the Pangu Team logo and a jailbreak button at the bottom. On the right, a macOS Terminal window shows that the hackers achieved root access on the device. 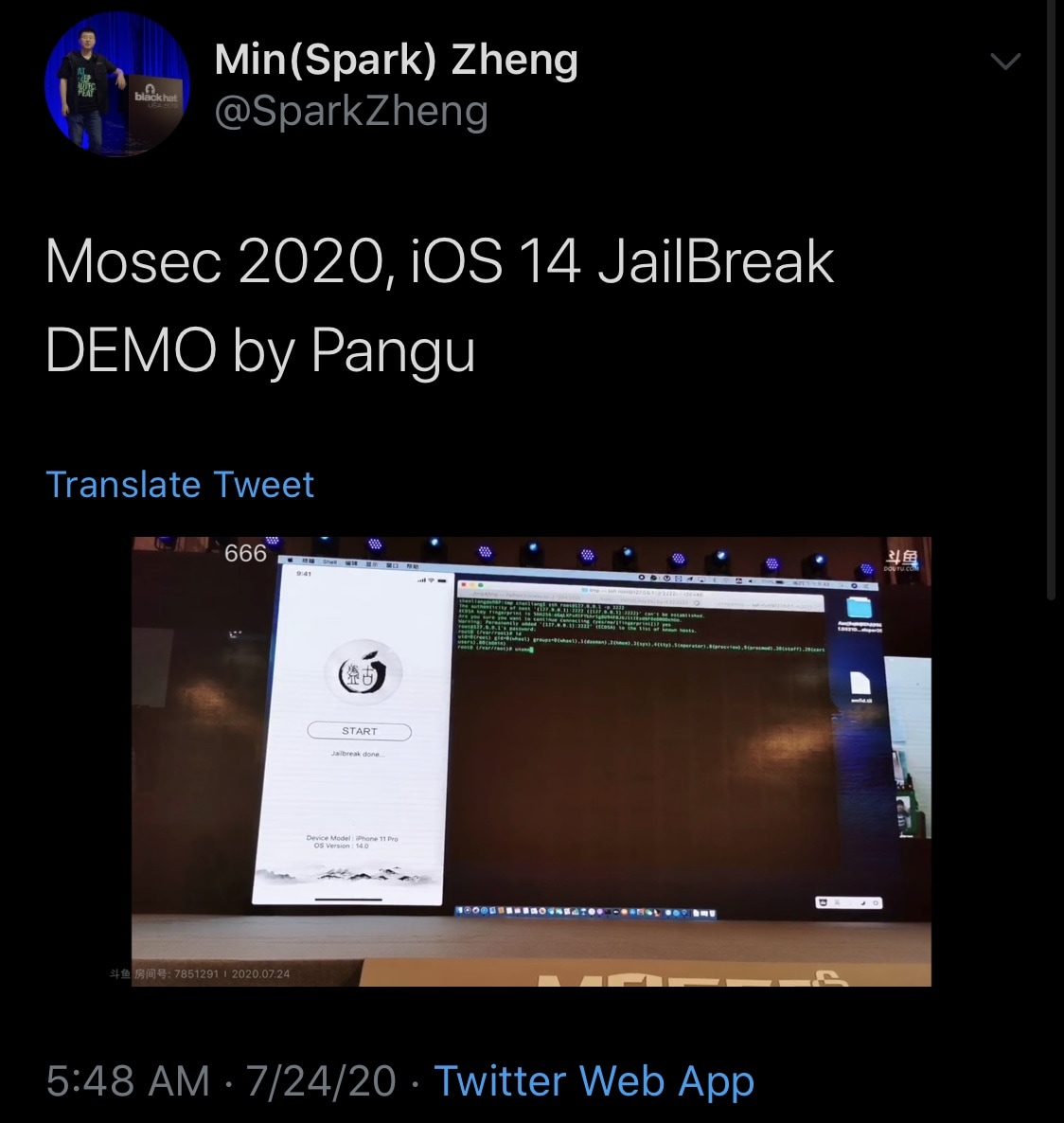 A closer look at the aforementioned image reveals that the jailbreak in question is being demoed on an iPhone 11 Pro running iOS 14. This combination currently represents Apple’s newest smartphone and latest firmware at the time of this writing, but that’s set to change when Apple launches all new hardware and software later this Fall.

It’s worth noting that the Pangu Team hasn’t published a public jailbreak since the faint days of iOS 9. While the team is unquestionably skilled at what they do, generally involving the production of fully untethered jailbreaks for various versions of iOS, they generally keep them private for internal security research purposes. We suspect that this example will be no different, especially since exploits are particularly valuable.

Although the Pangu Team may not release their iOS 14 jailbreak to the public, it’s still particularly interesting to see that Apple’s latest and greatest operating system can be pwned. Apple takes great pride in making each and every update harder to crack, and demonstrations like these prove that innovative hackers can get through just about anything they set their minds to.

Are you happy to see that iOS 14 has been jailbroken? Share your thoughts about it in the comments section below.