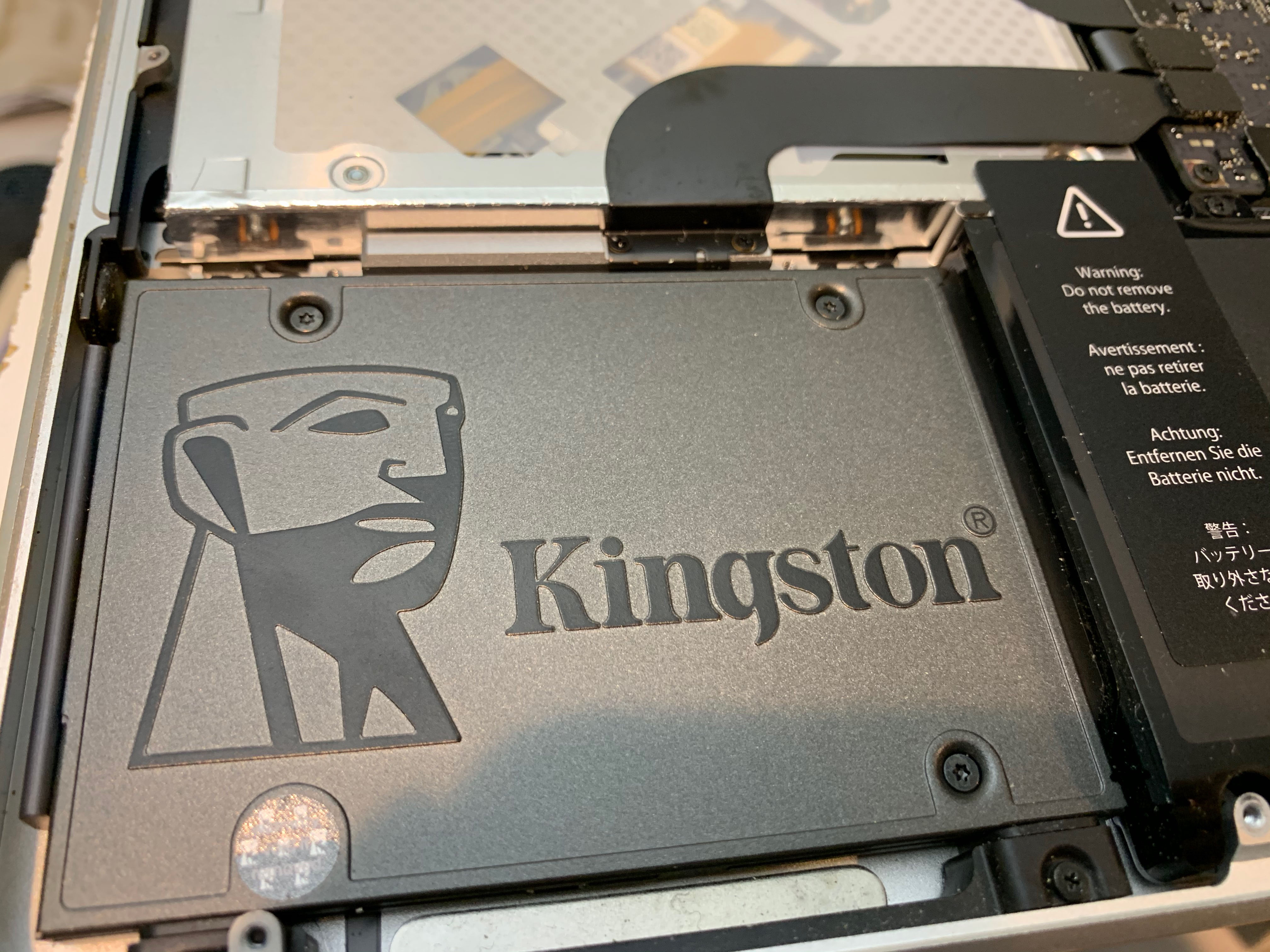 There are a lot of pre-Retina Display equipped 13-inch MacBook Pros still in service. If you have one and you’re looking to get some more bang for your buck, it’s possible with relatively little muss and fuss to upgrade them to keep them going a while longer while making them much faster than they ever were from the factory. One of the best performance upgrades you can give your MacBook Pro is to replace the stock hard disk drive with an SSD. This guide will show you how.

If you’re on a tight hardware budget, or like me, you’ve acquired one of these old workhorses for cheap and you’re willing to put a little bit of coin and some elbow grease to get it running well, the payoff is tremendous. I did an SSD upgrade for mine and it’s running like greased lightning. This same hardware design is shared by quite a few different 13-inch MacBook Pro models. Here’s a list of the specific Mac models that this SSD installation tutorial is applicable to:

While the specifications of each of these Macs is different, the actual architecture of them is similar enough that the same rules apply when it comes to taking them apart and upgrading them. Any 2.5-inch SSD with a SATA interface should be a plug-and-play replacement for the hard drive that came with your Mac.

If your Mac is running with the same spinning hard disk drive (HDD) it came with, it’s about time to replace it. Solid State Drives (SSDs) have come way down in price over the last few years. It’s now so economical to replace the 2.5-inch factory-installed HDD with an SSD that it’s crazy not to do it. What’s more, you can do it yourself using a couple of tools and some time.

To do this upgrade, you’re going to need a few things:

Once you’ve gathered the hardware and tools you need, you can get started with the upgrade. Safety first though! Read on for details.

Back up your MacBook Pro

TUTORIAL: How to set up Time Machine on Mac OS X

Format the SSD and transfer files

First, connect the SSD to your Mac using the SATA to USB cable.

1) Open the Utilities folder on your Mac.

4) Shut down your MacBook Pro, then restart it holding down the Command key. Boot into the Mac’s Recovery disk.

5) Click on Reinstall macOS X. Choose your SSD drive as the destination.

6) Once that’s complete, you’ll be prompted to restore files from another hard drive. Select your currently installed hard drive as the source. This will take a while, so go hydrate or find something else to do while your Mac copies files from the hard drive to the SSD.

Once this is done, your new SSD has all the files of your old hard disk. Shut your Mac down. Let’s get to replacing the old hardware.

First, make sure the power is off. Unplug the MacBook Pro from its power adapter. Then flip your laptop upside down on a flat, well-lit surface.

1) Locate and remove the 10 screws that hold the bottom case to the MacBook Pro using the Philips PH000 screwdriver. Put the screws in a container where they won’t roll off, or use a non-skid mat and lay them out in the same configuration you removed them, so you’ll know which screw goes where when you put things back together. Note several of the screws near the hinge are longer than the other screws. They’ll only fit in those holes. 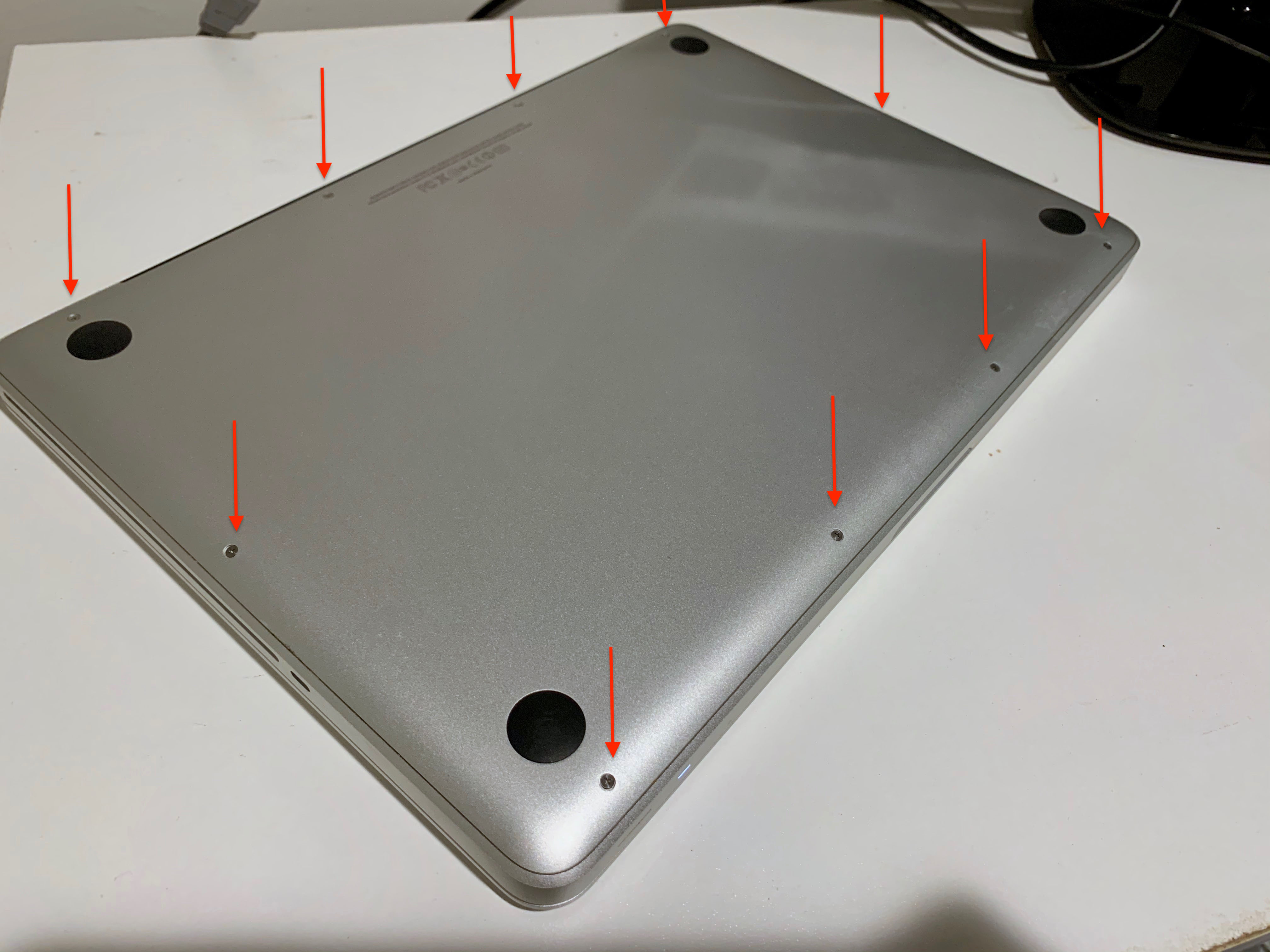 2) Remove the cover. Discharge static electricity that may have built up by touching a metal part inside the MacBook Pro.
The hard drive is located in the lower left hand corner. It is held in place by a plastic bracket connected with two screws. Unscrew the plastic bracket and set it aside. 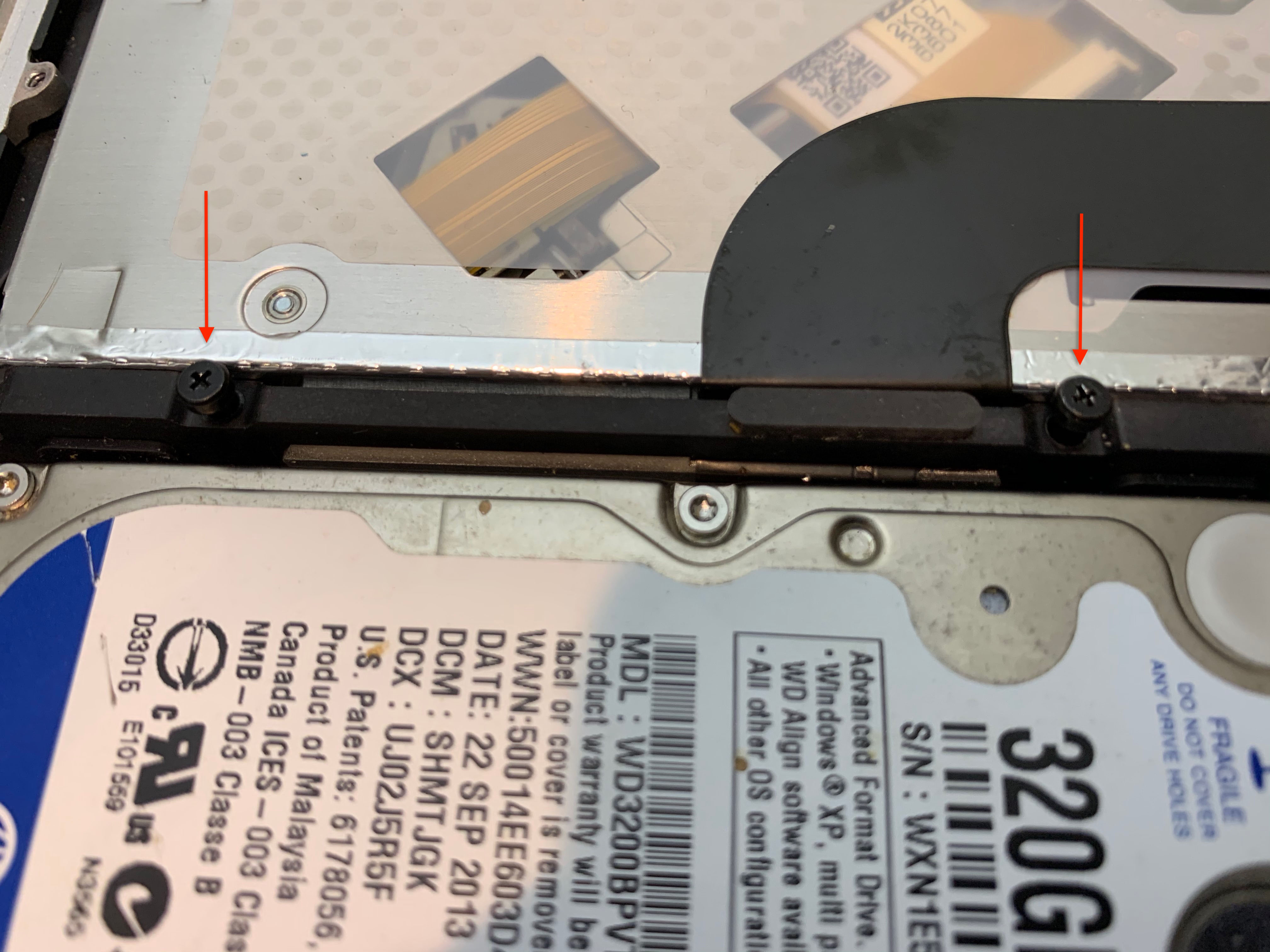 3) Remove the hard disk drive carefully. Disconnect the SATA data cable by gently wiggling it free. Don’t yank or tear on the cable. 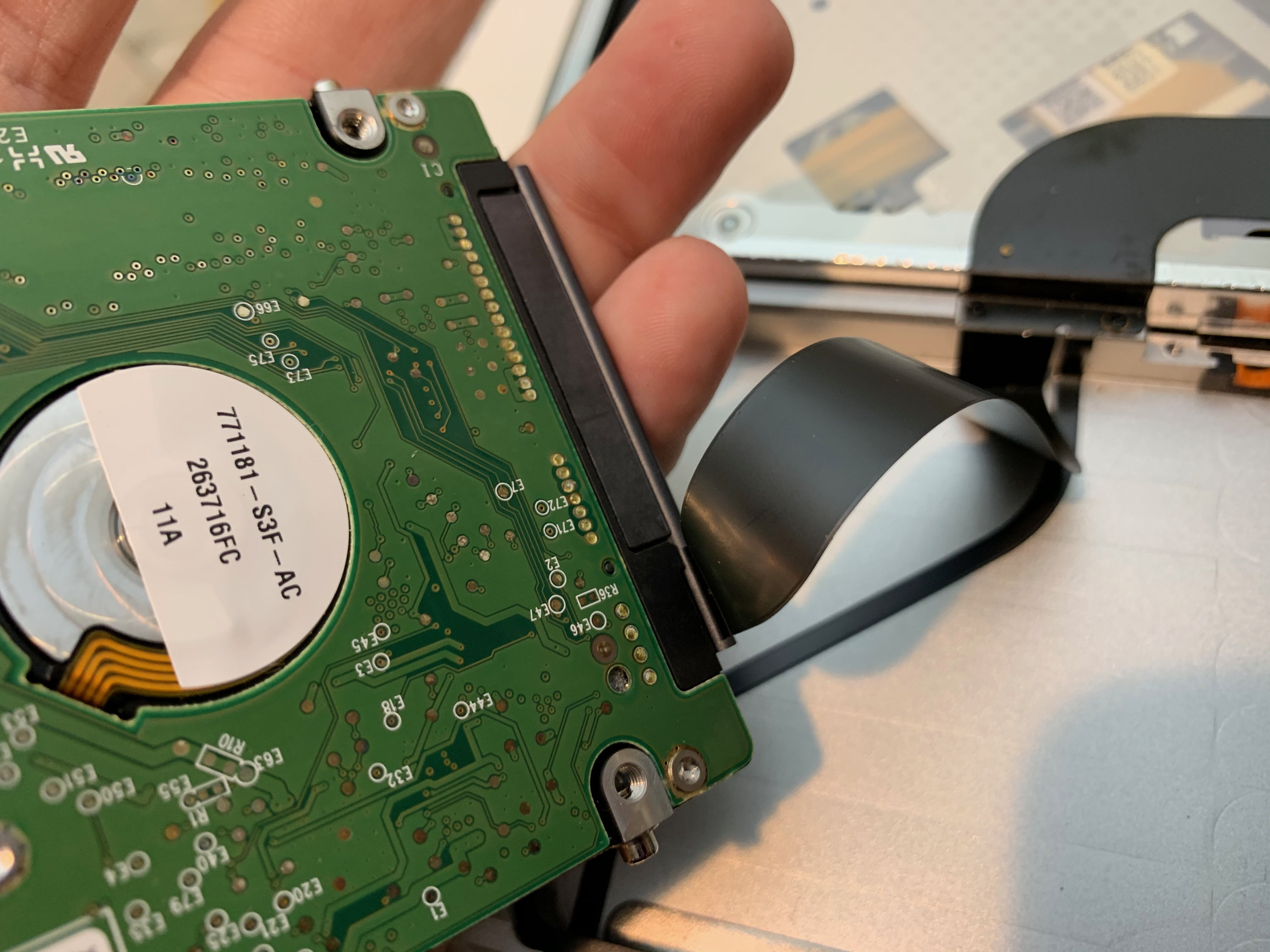 4) There are four screws on the drive which hold it in place in the bracket and the MacBook Pro’s chassis. Remove these using the Torx screwdriver in your toolkit. Attach them to the new SSD drive. 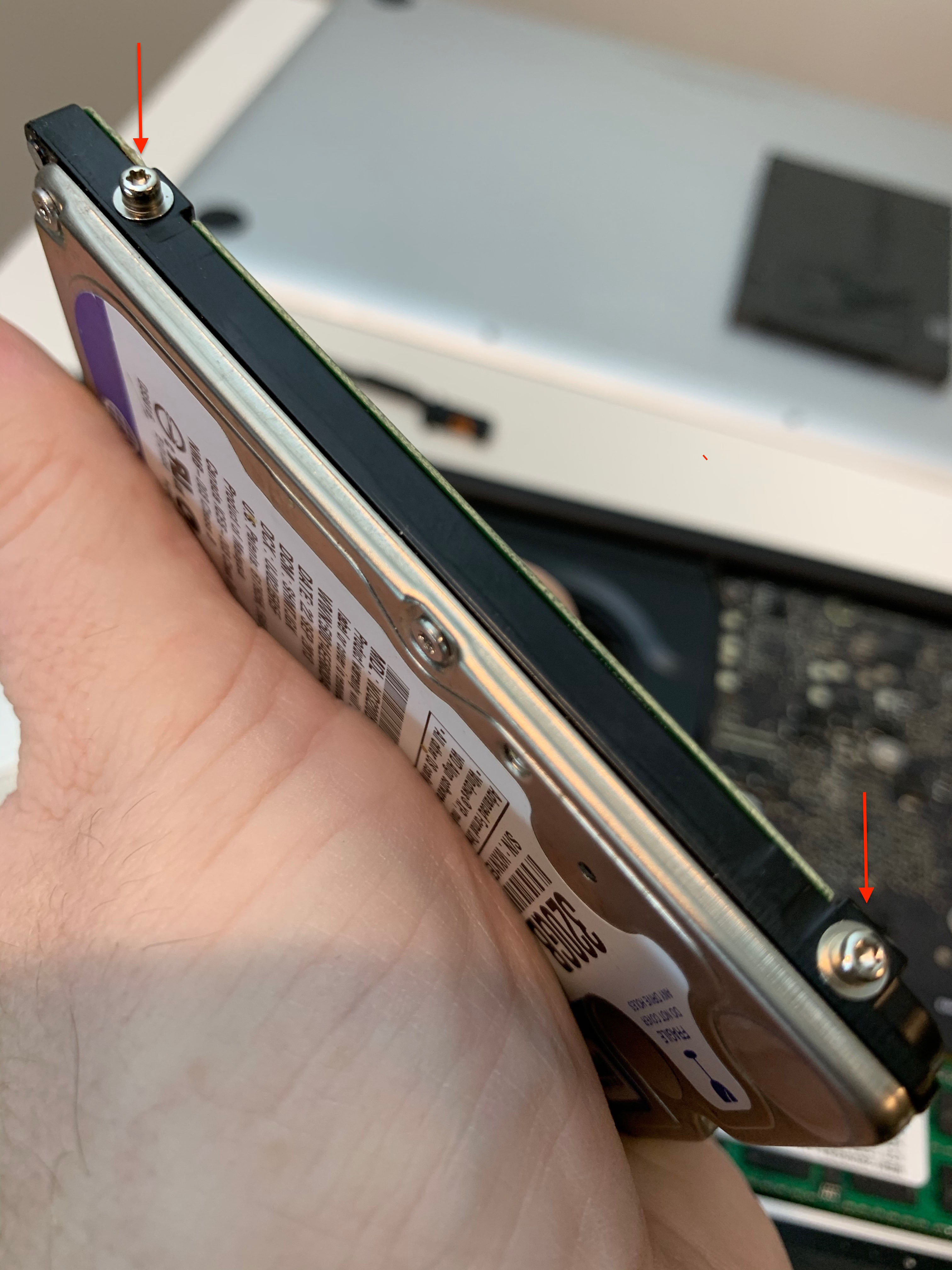 Installing the SSD is exactly the opposite operation that you just did to remove the hard drive.

1) Gently attach the SATA cable to the SSD and lower it back into place inside the MacBook Pro.

2) Screw the plastic bracket back into place to affix the hard drive.

3) Place the cover back on the bottom of the MacBook Pro, and reattach the ten screws you removed earlier.

That’s it! Your SSD should now be ready to use. Now comes the moment of truth! Power up your MacBook Pro. If everything has gone well, it should boot up with the same familiar startup you’re used to – only much faster, thanks to your new SSD.

You thought everything went right with your MacBook Pro SSD transplant, but you can’t get the Mac to boot. If the screen is staying black, or it lightens up but never completes the boot sequence, something must have happened. What went wrong? Follow these guidelines for some practical troubleshooting steps.

You’ve just transplanted a new SSD mechanism in place of the existing hard disk drive. Something may have gone wrong during that process. So go through the steps of disassembly and assembly again to see if you missed something. Is the SATA cable loose? Did it get crimped, torn or damaged in the process? Is everything seated in place? Check the fundamentals before you go any further.

With your Mac powered off, turn it on and hold down the command and R keys. This will activate Recovery Mode. Try running Disk Utility, and run First Aid to see if it can find any problems to repair.

Boot off your hard disk

You’ve just removed your hard disk, which is still working (we hope). You can try connecting the SATA to USB cable you used to format and transfer data to the new MacBook Pro SSD to that, instead. With the Mac turned off, connect the hard drive to an open USB port on your MacBook Pro. Turn on the MacBook Pro and immediately hold down the Option key. Select the hard disk, and boot off of it. It’ll be a bit slower than it was before because you’re using USB instead of SATA, but you can try running Disk Utility from there to see if there’s something wrong with the SSD, or if the data transfer didn’t complete.

Assuming everything’s gone well, I have one other suggestion for you to help keep your MacBook Pro going strong.

Upgrade your MacBook Pro RAM too

Replacing your hard drive with an SSD will boost its performance terrifically. The other thing you can do – even at the same time, since you have to take the bottom case off anyway, is to upgrade the RAM. Most of these older MacBooks are running 4GB or less, but can be upgraded to 8, or in some cases, like the 2012, 16 GB. Here’s the lowdown on upgrading your 2009-2012 13-inch MacBook Pro RAM:

Between more RAM and a nice speedy SSD, you’ll have a 13-inch MacBook Pro that boots in seconds, launches apps lickety-split, and can handle bigger data files than ever before. It’ll also be quieter than before since SSDs operate silently, with none of the high-pitched whine of the spindle motor of a conventional hard drive.

Hopefully this guide has given you what you need to make your 2009-2012 MacBook Pro a computer you can continue to use a while longer. An SSD will speed up performance like almost nothing else, except for more RAM, and with SSDs having come down in price so much, you’re almost crazy not to replace a spinning hard drive with one.

Have any questions or need more help? Let me know in the comments.