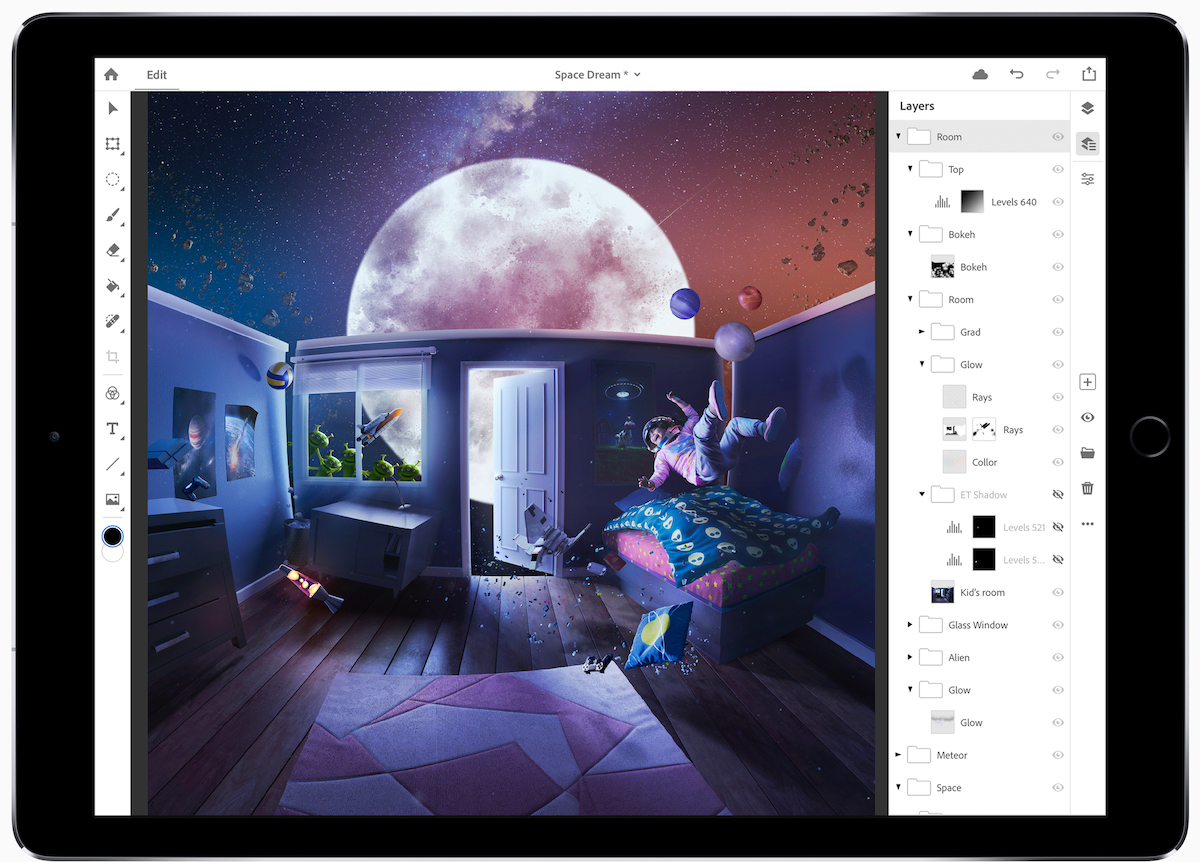 Adobe provided glimpses of an upcoming Photoshop CC for iPad port at an Apple event a year ago, promising to bring “real Photoshop” to the Apple tablet. According to a new report by Bloomberg, the iPad edition of the popular image-editing software is still on track for release before the end of 2019 as originally promised, but some key features won’t be available at launch.

That’s because Adobe has decided to pull some of the features following complaints from early testers who are reportedly disappointed by the “rudimentary” state of the iPad app.

Adobe Inc. is nearing the consumer launch of Photoshop for Apple Inc.’s iPads a year after it was officially announced, however the company and early testers have said that the application will lack some key features from the desktop version.

According to a source:

‘Feature-wise, it feels like a beefed-up cloud-based version of their existing iPad apps and not real Photoshop as advertised,‘ said someone beta-testing the software. ’I understand it is based on desktop Photoshop code, but it doesn’t feel like it right now.’ Other testers have called the app ’rudimentary’ and said, in its current state, it is inferior to other apps like Procreate and Affinity on the iPad.

Even though some key features from the desktop app will be missing from its iPad counterpart at launch, Adobe has promised to enhance the software’s capabilities on iPad over time.

It’ll provide an official update of the app’s launch at its annual creative software conference, Max, in early November in Los Angeles. The app is still on track to launch publicly by the end of this year, according to Scott Belsky, chief product officer of Adobe’s Creative Cloud division.

Photoshop CC for iPad is built on code base that powers the desktop app.

The iPad app is redesigned for touch input and lets users edit native PSD files, access the familiar layers panel, use Photoshop’s powerful image-editing tools and much more. And because everything syncs through the Adobe cloud, people will be able to start working on a project on desktop and continue right where they left off on their iPad, and vice versa.

“With Photoshop CC across devices, coming first to iPad in 2019, you will be able to start your work on an iPad and seamlessly roundtrip all of your edits with Photoshop CC on the desktop via Creative Cloud,” Adobe said.

Here are the key highlights:

Of course, Photoshop is an incredibly complex app and bringing the full Photoshop experience to the Apple tablet is basically the mother of all ports. I suspected that Adobe would rely on the power of machine learning in the cloud to bring the full power of Photoshop to iPad, but it turns out that building a full-on Photoshop tablet experience is easier said than done.

If you’re a Creative Cloud subscriber, you can sign up for the Photoshop for iPad beta program.

Are you looking forward to using Photoshop on your iPad?