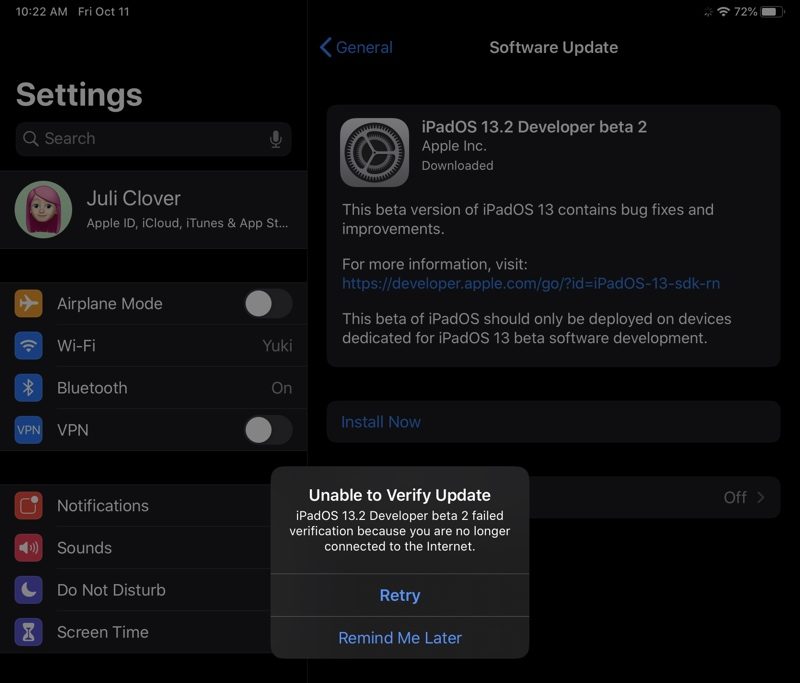 Yesterday, Apple seeded the second developer beta of iOS 13.2, but it sounds like the new pre-release software is causing some issues.

MacRumors is reporting that Apple has pulled the iOS 13.2 developer beta 2 for the iPad Pro following reports that some 2018 iPad Pro models are being bricked after updating the software. For the impacted iPad Pro models, those trying to update the software got caught in a failure to properly install completely. As such, the tablets need a full restore to start functioning again, at least in most cases.

Some iPad Pro owners have noticed that even trying a full restore doesn’t work. Here’s one beta tester on the issue, where even the full restore didn’t fix the problem:

My ‌iPad Pro‌ 11″ is in the same position, it failed during the update of iOS 13.2 beta 2. What you can try is putting it into DFU mode (press volume up, volume down, then hold power for 5 or so seconds) and plug it into iTunes via cable to restore it that way.

However, unfortunately mine gets an error when i try this so i have an Apple appointment tomorrow to get them to fix it.

As mentioned above, it appears that Apple has pulled the second iOS 13.2 beta for developers, specifically for the iPad Pro, as it tries to fix the issue. If someone does try to install the pre-release software on their tablet, an error message will pop up that says the new software is unable to be verified.

According to the report, Apple pulled the latest iOS 13.2 beta for the iPad Pro late last night. The company will likely have a new version of the pre-release software ready to go, with all issues patched up, in the near future. As soon as it goes live, we will update this post accordingly.

If you have a 2018 iPad Pro and tried to install the second iOS 13.2 developer beta, did you run into an issue?

The silver lining here is that iOS 13.2 does actually add quite a bit of good news to the mobile operating system. That includes the ability to delete Siri and Dictation history, and also offers another hint that Apple is working on AirPods with noise cancellation. There are also new emoji and other tweaks to the software.