At the time of this writing, all publicly-available jailbreak tools only support up to iOS 12.1.2. But less than two weeks ago, a tfp0 exploit was achieved on iOS 12.2, raising hopes for the possibility of a jailbreak release for this particular firmware version.

To most of the jailbreak community, a full-fledged jailbreak is more than just root access to a device’s filesystem; most users also rely on a tried and true package manager to install their favorite extensions. With that in mind, it should come as no surprise that renowned hackers like Pwn20wnd are currently playing around with Cydia compatibility on iOS 12.2, especially given the latest news.

Just this morning, Pwn20wnd announced via Twitter that both Cydia and Cydia Substrate appear to work flawlessly on an emulated pre-jailbroken installation of iOS 12.2: 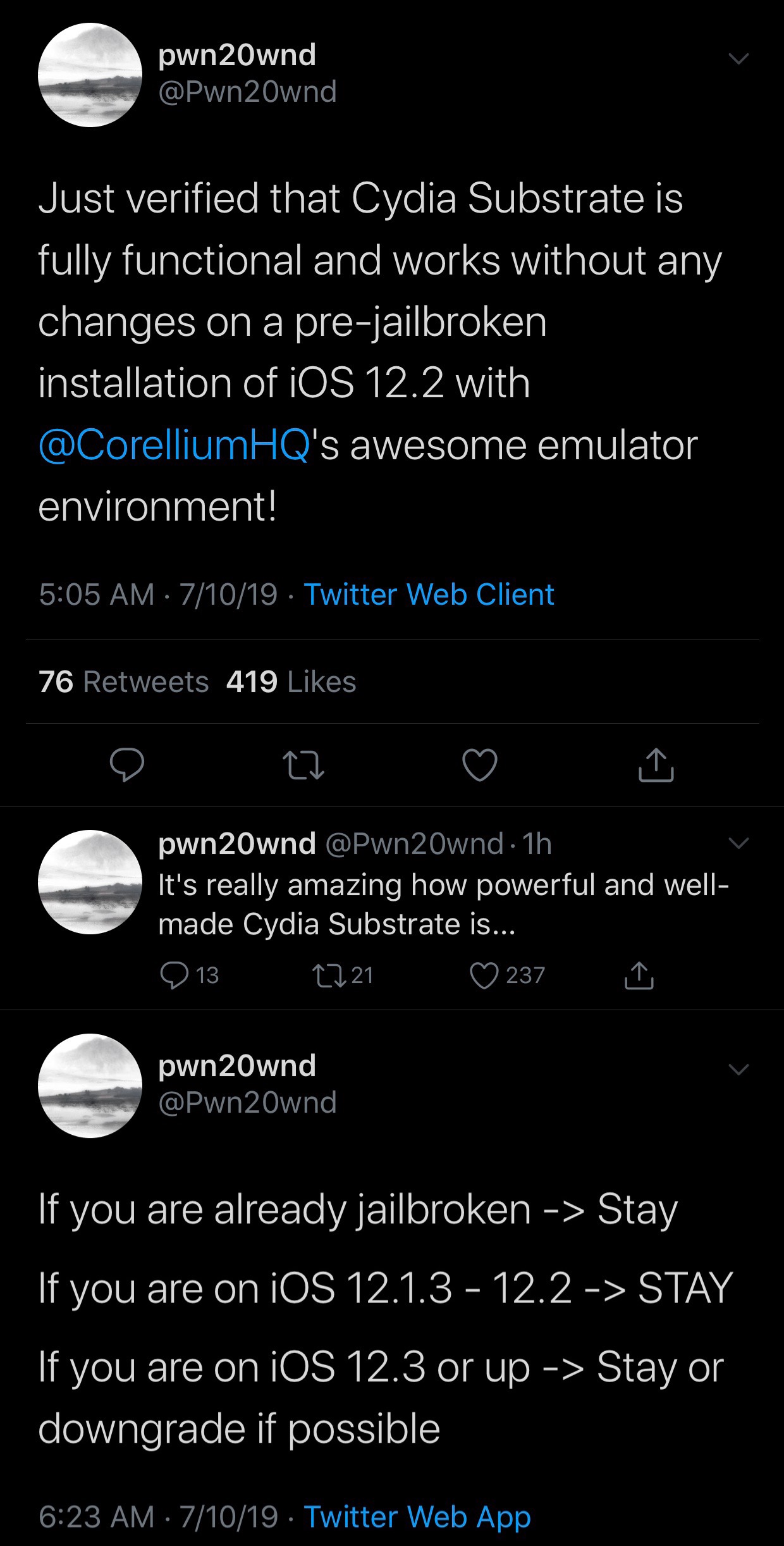 This shouldn’t come as much of a surprise since there aren’t many differences between iOS 12.2 and 12.1.2 apart from security patches and a few minute features; on the other hand, it’s particularly good news since Saurik isn’t exactly going out of his way to update Cydia Substrate anymore and so it wouldn’t need to updated if current jailbreaks picked up iOS 12.2 support.

Conveniently, iBSparkes recently teased the Cydia app running on the first iOS 13 beta, but it remains to be seen if it or Cydia Substrate would need to be updated for full compatibility.

While there’s no guarantee that an iOS 12.2 jailbreak will be released anytime soon, that didn’t stop Pwn20wnd from sharing wise advise to the community regarding what they should do in lieu of the very real possibility:

It’s worth noting that Cydia Substrate still doesn’t support A12(X) devices, such as the iPhone XR, XS, and XS Max. That said, Pwn20wnd’s unc0ver jailbreak still only ‘partially’ supports these devices, but Pwn20wnd is currently working on Substitute support for these devices, a move that will eventually bring unc0ver up to speed with the Electra Team’s Chimera jailbreak in terms of A12(X) device support.

Are you excited to hear that Cydia and Cydia Substrate wouldn’t need an special updates to run on iOS 12.2? Let us know in the comments section below.