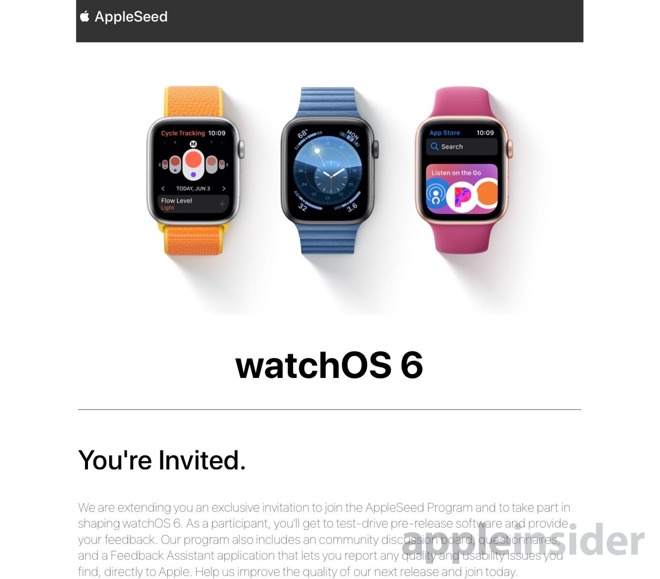 Earlier today, Apple seeded a variety of different betas, including the first public beta of iOS 13/iPadOS. watchOS 6 was left off the list, however.

AppleInsider has the report on Monday, saying that Apple is sending out AppleSeed invitations to Apple Watch owners to try out watchOS 6 ahead of its public launch later this year. Apple’s invite is pretty straightforward, with the email detailing how the user can get started as part of the AppleSeed program.

You can see a screenshot of the email Apple is sending to some AppleSeed members at the top of this article.

AppleSeed is a bit different than the public betas that Apple seeded earlier today, though, as explain in the original article:

While Apple does operate a public beta program that anyone can join, AppleSeed requires people to be invited to take part, allowing Apple to be more selective in the kinds of feedback it can expect back. Participants are supplied with the use of a community discussion board, are sent questionnaires, and can use a Feedback Assistant app to report quality and usability issues directly to Apple.

One other tidbit worth mentioning here in relation to the AppleSeed program: it’s covered by Apple’s standard non-disclosure agreement (NDA). That means if you do get an email invitation, install the beta, you will more than likely be limited in scope regarding what you can talk about the pre-release software with other people.

So, if you get an email, consider the NDA itself, but also the fact that the software may be buggy as well.

watchOS 6 will launch later this year, likely in September, along with the public releases of iOS 13, iPadOS, tvOS 13, and macOS Catalina.

Did you get an AppleSeed invite for watchOS 6?