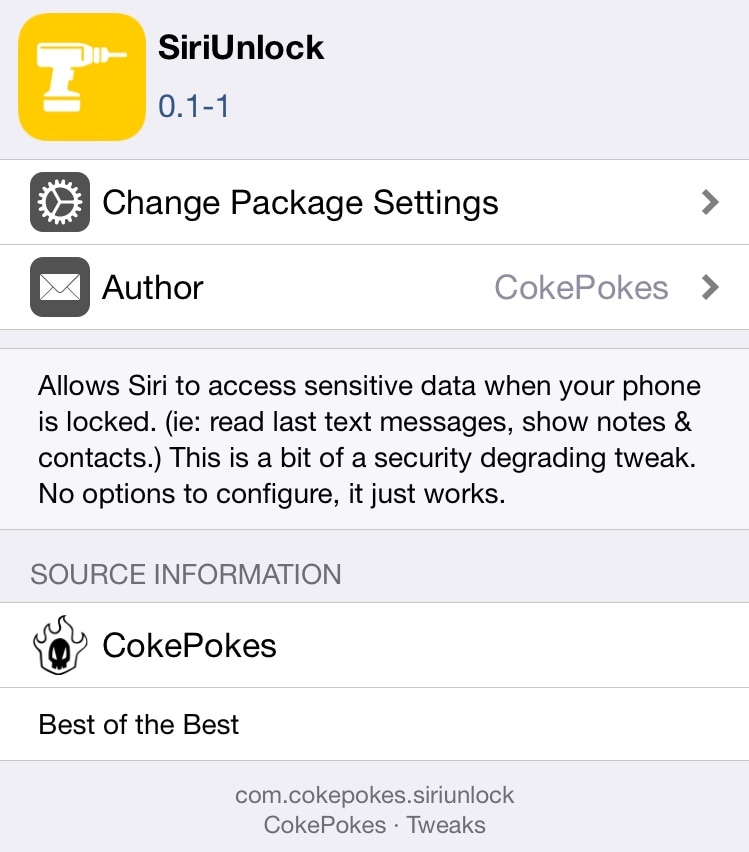 Siri can make interacting with your iOS handset easier, and more specifically, the ‘Hey Siri’ feature comes in handy when you have dirty hands and you don’t want to touch your device. But when your handset is locked, Apple prevents Siri from accessing certain things to protect your privacy from those who may try to exploit her handiness to reveal personal information about you.

While we can understand Apple’s reasoning for doing this, we also understand that some iOS device power users care more about functionality than privacy, and so it would’ve been nice if Apple offered more flexibility in this department. Fortunately, a newly released and free jailbreak tweak called SiriUnlock by iOS developer CokePokes makes this happen.

Once installed, SiriUnlock removes these limitations set by Apple such that you won’t need to unlock your handset to access personal information with the Siri voice assistant. More specifically, you’ll be able to access things akin to contacts, notes, and text messages, among other things.

For what it’s worth, this tweak puts much of your personal information at risk of being snooped upon by anyone who happens to end up with your handset. On the other hand, the tweak might still be preferable if you fall into either of the following categories:

SiriUnlock doesn’t have any options to configure, and it really doesn’t need any. The tweak works as intended once installed, and you can easily revert to iOS’ native Siri-centric privacy settings by uninstalling it from your device.

Those interested in trying SiriUnlock can download it for free from CokePokes’ beta repository in Cydia or Sileo. The tweak should play nicely with all jailbroken iOS 11 and 12 devices.

If you aren’t already using CokePokes’ beta repository, then you can add it to your package manager of choice via the following URL:

What are your thoughts regarding SiriUnlock? Let us know in the comments section below.