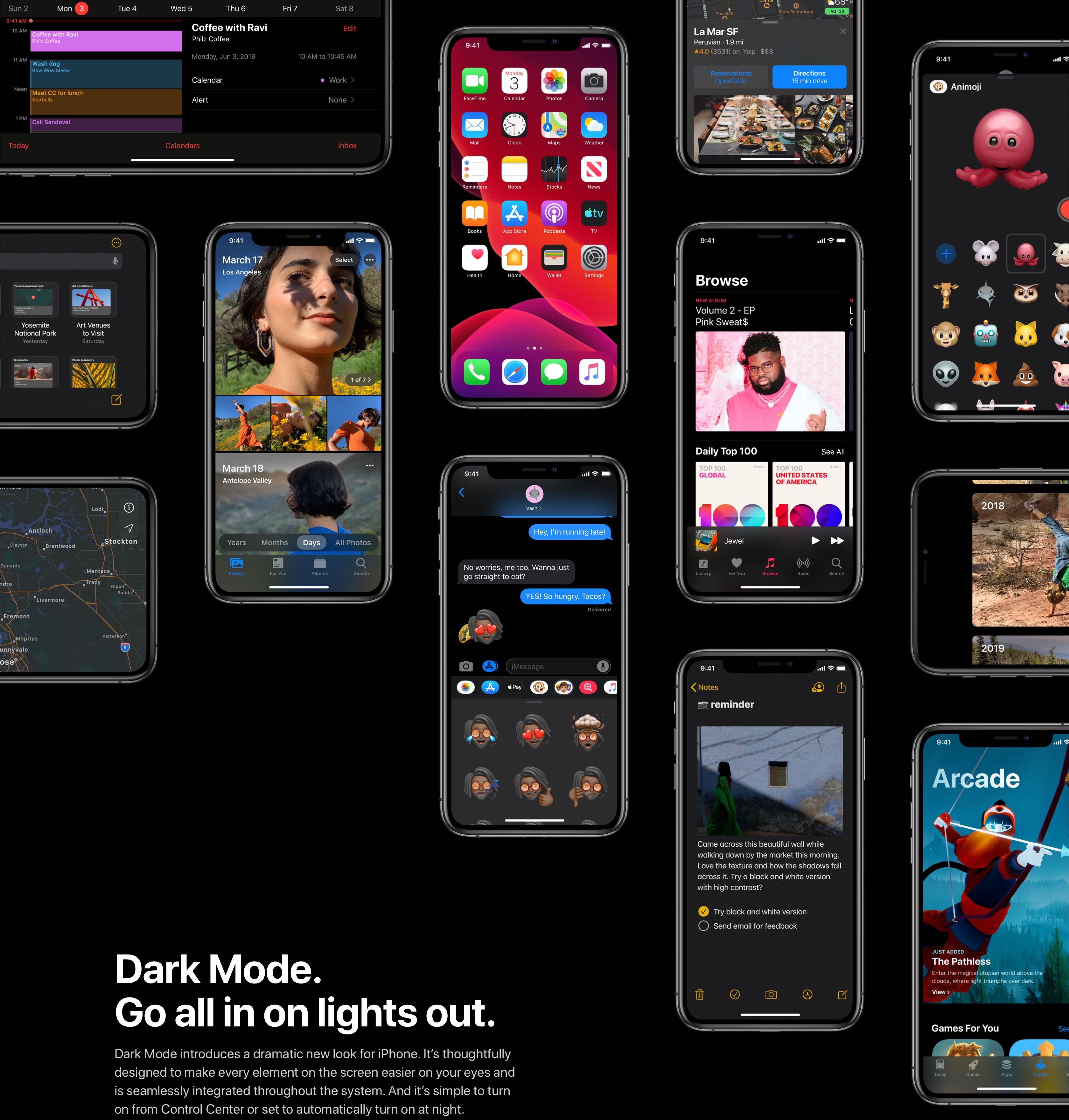 A long-rumored Dark Mode for iPhone and iPad has finally surfaced after its Mac debut in macOS Mojave last year. It’s coming to everyone via a free iOS 13 software update in the fall.

Apple unveiled a new darkened interface in iOS 13 during the June 3, 2019 WWDC keynote. One of the biggest crowd-pleasers in iOS 13, it alters the appearance of text, buttons and other user interface elements so that apps you use have a predominately black background.

But first, watch our Dark Mode video overview embedded below.

Dark Mode has a dedicated toggle in Control Center — simply pull down from the upper-right corner of the display, then tap and hold the Brightness slider to reveal hidden options. Now you can tap Appearance to cycle between Light and Dark theme on the fly.

It can also be controlled from Settings → Display & Brightness → Appearance.

Similar to Do Not Disturb / Night Shift scheduling, new options in Settings allow you to schedule Dark Mode so that it turns on automatically at sunset or at a certain time.

Dark Mode is available on iPad, too.

Dark Mode is thoughtfully designed to make every element on the screen easier on your eyes and is seamlessly integrated throughout the system. And it’s simple to turn on from Control Center or set to automatically turn on at night.

In demonstrating Dark Mode during the WWDC 2019 keynote, software engineering head Craig Federighi brought up slides showing off iOS 13’s new darker wallpaper along with dark styles in stock apps and core system features such as notifications, AirPlay menus and a new QuickPath keyboard which helps you write faster by swiping from one letter to the next.

Dark Mode saves your eyesight by reducing glare from predominantly white interfaces. It also serves other practical purposes, especially on OLED devices like iPhone X and iPhone XS that can illuminate individual pixels without using any backlight at all.

Since each pixel of an OLED screen can be controlled individually while emitting its own light, Dark Mode is an important software feature of mobile devices due to its battery-saving effects.

If you need a research to convince you that darker pixels actually save battery power, Google has one. Last November, the search giant has determined that enabling the built-in dark interface in the YouTube app for iOS and Android can save up to 60 percent battery life on smartphones with OLED screens.

Just don’t confuse iOS 13’s new Dark Mode with the Smart Invert feature brought out in iOS 11. Whereas Smart Invert is an accessibility feature that simply reverses the colors of the display—except for images, media and some apps that use dark color styles—the new Dark Mode is more subtle than just reversing to white text on black backgrounds.

Dark Mode in your favorite apps

Thankfully, Apple has also provided APIs for developers to make their apps compatible with Dark Mode. Many popular third-party apps have implemented their own dark themes in the past year or so, but the user must be aware that their favorite app actually supports Dark Modem then tap their way through in-app settings to find the option to cycle between UI themes.

With an official API, this becomes a thing of the past.

Dark Mode is a new dark color scheme that works system-wide and across all native apps to deliver a great viewing experience, especially in low-light environments. Dark Mode is available to third-party app developers for integration into their own apps and can be scheduled to turn on automatically at sunset or at a certain time.

Now a developer using the official Apple-provided APIs is free to create a darkened user interface theme for their app, as per Apple’s guidelines, and register it with the system.

As with macOS, this has a major benefit of being able to switch to dark interfaces in all stock and third-party apps in one go, simply by activating Dark Mode in Control Center.

Some apps may retain their existing dark themes, but we think the vast majority of apps will adopt Apple’s sanctioned solution because it’s so much better from a usability standpoint.

Here’s a summary of everything you need to know about the new Dark Mode in iOS 13.

And that’s all we have for you today when it comes to Dark Mode in iOS 13.

So, who’s looking forward to using this cool new feature?