Veteran iOS users probably still remember the day when Apple introduced notification banners to their mobile operating system to replace the intrusive notification alerts that used to pop up in the middle of your display. But it seems like modern banner notifications are a lot taller than they need to be.

Those interested in shrinking down the size of their handset’s incoming banner notifications will come to appreciate a newly-released and free jailbreak tweak called Nanobanners by iOS developer Nepeta. This tweak takes a no-BS approach to making your handset’s banner notifications more tolerable, as shown in the screenshot example above.

The chief problem with modern notification banners in iOS is their vertical screen real estate usage. They’re so tall nowadays that they block navigation bar controls and get in the way when you don’t want them to. Apple’s banner notifications were mostly perfect in iOS 6, but that all seemed to change post-iOS 7 for whatever reason.

Nanobanners goes a step beyond iOS 6 and shrinks incoming banner notifications to nearly the height of your Status Bar. The banners still get the point of the notification across, but they’re short enough that you can still tap on any navigation bar buttons that might appear anywhere behind them.

Once installed, Nanobanners puts a preference pane in the Settings app where you can configure the tweak to your liking: 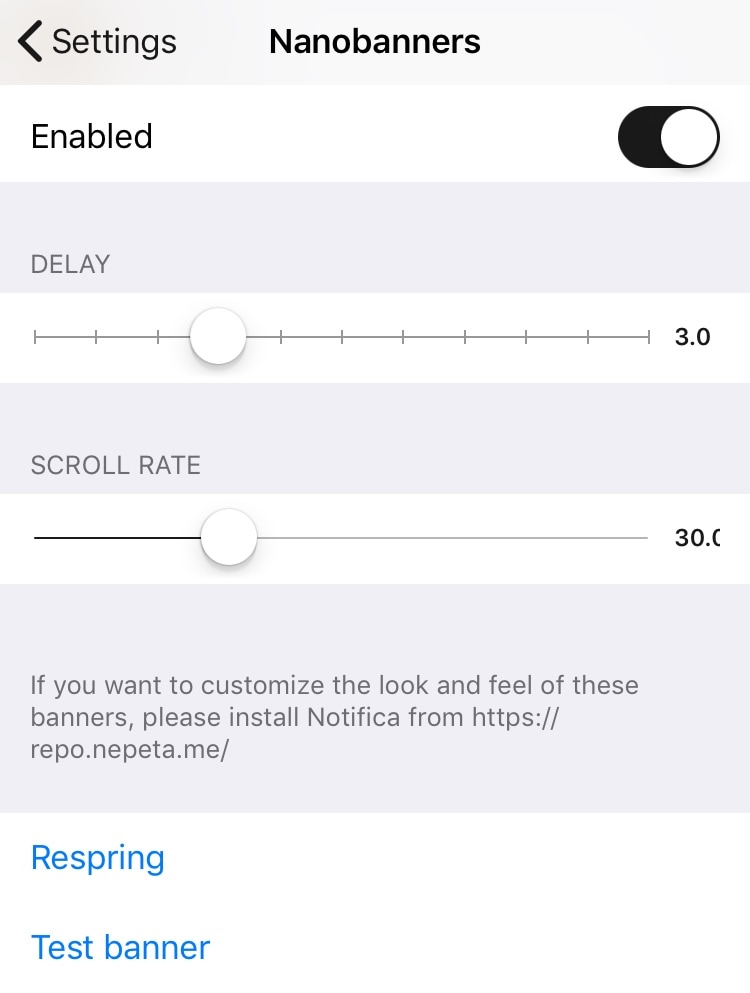 To those interested in customizing the aesthetics of their banner notifications, Nepeta advises installing another jailbreak tweak called Notifica from her repository. This tweak plays nicely with Nanobanners, and provides colorization options, among other things.

If you’d like to give Nanobanners a try, then you can download it for free from Nepeta’s repository in Cydia or Sileo. The tweak supports all jailbroken iOS 11 and 12 devices, and Nepeta has published its source code on GitHub for anyone who’d like to learn more about what makes the tweak tick.

Will you be adding Nanobanners to your jailbreak tweak arsenal? Share why or why not in the comments section below!