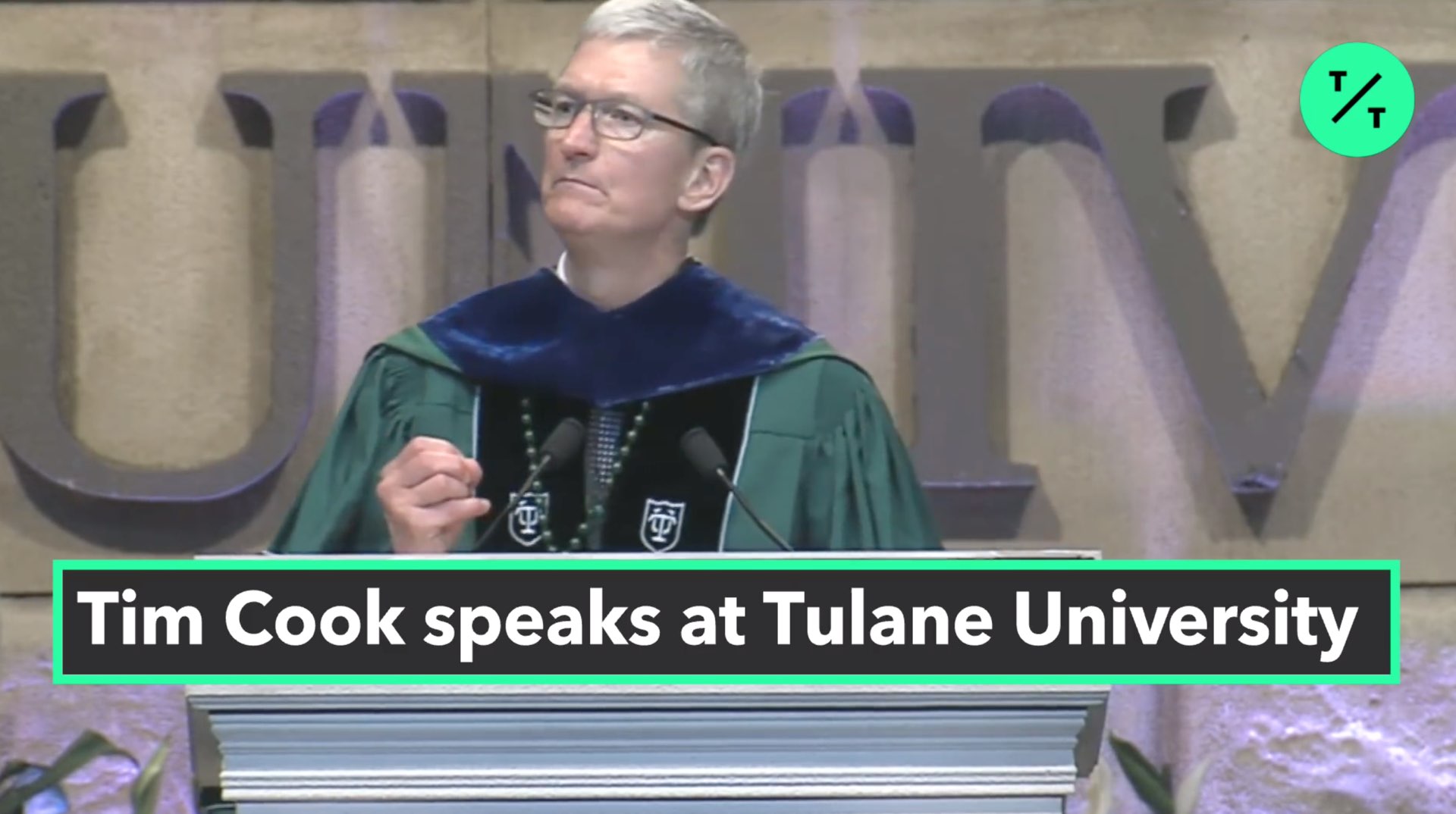 Tim Cook on Saturday delivered a speech commencement address to Tulane University graduates at the Mercedes-Benz Superdome in New Orleans. In his speech, the Apple CEO used some thought-provoking ideas to inspire students. In one instance, he urged grads to “push back” against algorithms that promote the “things you already know, believe or like”.

The executive recounted how Steve Jobs poached him from Compaq to be his right-hand man and discussed climate change and other relevant topics. “You may succeed. You may fail. But make it your life’s work to remake the world,” he said. “Because there is nothing more beautiful or worthwhile than working to leave something better for humanity.”

Congratulations to the Tulane class of 2019! Thank you for inviting me to be a part of today’s festivities — ROLL WAVE! 💚🌊

He advised graduates to be a force of change to “build a better world” and solve the problems that seem too big to solve. “From climate change to immigration, from criminal justice reform to economic opportunity, be motivated by your duty to build a better world,” he said.

Watch the video of Cook’s full commencement address below.

And now, here are some choice quotes.

Cook reflected on how Steve Jobs lured him away from Compaq to fix Apple’s many issues at a time when it wasn’t clear the company would ever survive its darkest days.

I had a comfortable job at a company called Compaq that at the time looked like it was going to be on top forever. As it turns out, most of you are probably too young to remember its name. But in 1998, Steve Jobs convinced me to leave Compaq behind to join a company that was on the verge of bankruptcy. They made computers, but at that moment at least people weren’t interested in buying them. Steve had a plan to change things and I wanted to be a part of it.

Who knew back then that Jobs was hiring someone who would become his successor?

It wasn’t just about the iMac or the iPod or everything that came after. It was about the values that brought these inventions to life. The idea that putting powerful tools in the hands of everyday people helps unleash creativity and move humanity forward. That we can build things that help us imagine a better world. And then make it real.

And this on the tired old adage about finding a job you love.

There’s a saying that if you do what you love you’ll never work a day on your life. At Apple, I learned that’s a total crock. You’ll work harder than you ever thought possible… but the tools will feel light in your hands.

People should keep their mind open to different perspectives, he said.

We should instead respect the views of others who see an issue differently, he said.

Summon the courage not just to hear but to listen. Not just to act but to act together. It can sometimes feel like the odds are stacked against you, that it isn’t worth it. That the critics are too persistent and the problems are too great. But the solution to our problems begin on a human scale by building a shared understanding of the work ahead, and with undertaking it together. At the very least we owe it to teach other to try.

He went on to say that his generation failed on climate change.

In some important ways, my generation has failed you. We spent too much time debating, too focused on the fight and not enough on progress. You don’t need to look far to find an example of that failure. Here today, in this very place, in an arena where thousands once found desperate comfort from a hundred-year disaster, the kind that seems to be happening more and more frequently, I don’t think we can talk about who we are as people without talking about climate change.

Tim was of course referring to New Orleans, which was devastated by Hurricane Katrina in 2005. Climate change isn’t about politics, he said, it’s about survival of the human race.

This problem doesn’t get easier based on who wins an election. It’s about who has one life’s lottery and has the luxury of ignoring this issue and who stands to lose everything. The costal communities, including some right here in Louisiana, that are already making plans to leave behind the laces they’ve called home for generations and head for higher ground. The fishermen whose nets come up empty. The wildlife preserves with less wildlife to preserve, the marginalized for whom a natural disaster can mean enduring poverty.

He urged students to consider “what we owe” to one another.

These are people’s homes, their livelihoods. The land where their grandparents were born, lived and died. When we talk about climate change, I challenge you to look for those who have the most to lose and find the real, true empathy that comes from something shared. That is really what we owe one another. When you do that, the political noise dies down and you can feel your feet planted on solid ground. We don’t build monuments to trolls and we’re not going to start now.

Whatever you do, don’t make the mistake of being too cautious. Don’t assume that by staying put, the ground won’t move beneath your feet. The status quo simply won’t last. So get to work on building something better.

Prior to the speech, Cook was awarded an honorary degree from Tulane.

On tech and social media

Cook has also hinted that today’s technology can easily create a disconnect between users it’s supposed to help bring closer together.

In a world where we obsessively document our own lives, most of us don’t pay nearly enough attention to what we owe one another. It’s about recognizing that human civilization began when we realized that we could do more together.

And this may have been a reference to Facebook and social media:

We forget sometimes that our preexisting beliefs have their own force of gravity. Today, certain algorithms pull towards you the things you already know, believe or like, and they push away everything else. Push back. It shouldn’t be this way. But in 2019 opening your eyes and seeing things in a new way can be a revolutionary act.

Facebook’s 2016 update changed the News Feed algorithm to display more content from friends and less from brands and companies, prompted some media analysts to accuse the social network of exposing users to the ideas that reinforce their own beliefs.

Music and food are the soul of New Orleans. Love seeing the gumbo of arts, learning and technology at the Ellis Marsalis Center for Music where community becomes family. pic.twitter.com/YDk100ZZ3q

Apple, on the other hand, is known for providing users a curated platform.

The company employs human editors that pick and review apps which go in App Store, as well as create genre and mood-based playlists that you enjoy on Apple Music, recommend quality news stories on Apple News and so forth. And of course it was Apple that first banished Alex Jones from its platforms, prompting other technology giants to follow suit.

The CEO also visited the nearby Ellis Marsalis Center for Music where he met with founders Ellis Marsalis and Harry Connick Jr., taking the opportunity to announce that his company will be donating products for the center’s studios.

He spoke briefly afterward about New Orleans’ potential as a technology hub and the need for more diversity in the industry, “including directing more funds to businesses run by people other than white men,” according to The Advocate.

Cook, 58, is part of the Boomer generation and college grads are members of Generation Z.