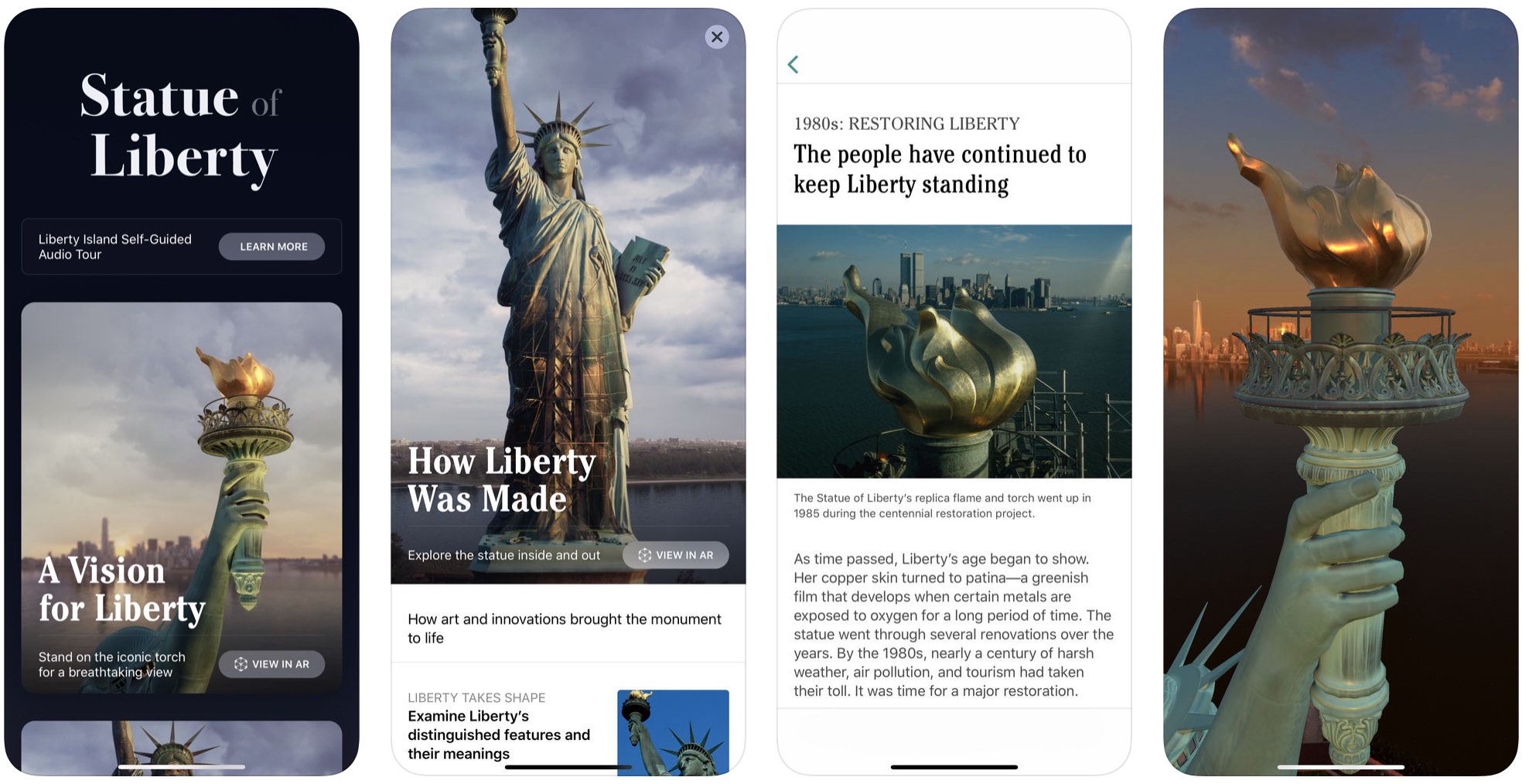 One of America’s most inspiring symbols, the Statue of Liberty located on New York’s Liberty Island, now has an official iPhone app of its own. And with support for augmented reality, you can see Lady Liberty in your own world and rotate and explore her from all angles.

A rich curation of stories and visual media walks you through more than 150 years of the Statue’s history — from her origins in France in 1865 to the opening of the new Statue of Liberty Museum in May 2019. The app also features two immersive audio experiences: an exclusive podcast transports listeners to critical moments in the Statue of Liberty’s history and an interactive audio tour guides visitors to 35 points of interest as they explore Liberty Island on foot.

Aside from historical and educational content, augmented reality also lets you experience a rare view from the Statue of Liberty’s torch complete with views of Liberty Island and the expansive New York Harbor. “No one has seen this view since 1916, when public access to the torch was shut down,” developers note.

The app was created by foundation board member and fashion designer Diane von Fürstenberg with a little help from Apple and her friends. “Tim Cook had never been to the Statue of Liberty so he came to see it and he was overwhelmed,” von Furstenberg, who is a Belgian immigrant, told reporters ahead of the app’s launch.

More on this can be found in a Vogue piece.

She has tirelessly fund-raised together with her husband Barry Diller to create the new Statue of Liberty Museum and supporting projects to take Lady Liberty into the digital age, including a podcast titled “Raising the Torch.” The podcast episodes feature different historians who discuss aspects of the Statue’s past and place it in a historical context, CNN explains.

Apple CEO Tim Cook said on Twitter that the app is “just the beginning of how augmented reality will transform the way we connect with our world’s treasures”. He’s right about that. Augmented reality is still not a killer app but the system works great for some niche segments, like furniture shopping and, yes, exploring monuments like the Statue of Liberty.

The Statue of Liberty app is just the beginning of how AR will transform the way we connect with our world’s treasures. Thank you @DVF and @StatueEllisFdn for your work to preserve one of America’s greatest, most inspiring symbols.🗽https://t.co/jV4U5HrMeB

Developers claim that the 3D model of Lady Liberty is the most accurate life-sized model of the Statue to date, complete with the iconic green patina we see today, details on her left foot and Gustave Eiffel’s trussed iron tower found inside the Statue.

Download the Statue of Liberty app at no charge from App Store.