Developer Khaos Tian has managed to add his Smart TV to the Home app on the iOS 12.2 beta by hacking Apple’s HomeKit protocol. As a result, he’s discovered, screenshotted and capture on video some of the upcoming HomeKit features for Smart TV integration and control.

Having hacked HomeKit, Khaos created a new tile in the Home app for controlling a Smart TV. With a little trickery, he was able to control his LG G7p TV running webOS 3.5 from the Home app on his iPhone running the iOS 12.2 beta, as evidenced by a video he shared on Twitter.

Tapping the tile turns the connected TV set on or off.

Tapping the Details button gives you access to additional controls, like changing input on the TV (you can even rename the inputs to your liking). A future beta may even bring the ability to change input through Siri.

An automation scene can now turn on your Smart TV and switch it to specific input. For those wondering, this will also work via CEC HDMI to turn on a TV set connected to an Apple TV.

As iDownloadBlog originally discovered earlier in January, Apple’s HomeKit framework for the connected home has been updated and expanded to Smart TVs.

TUTORIAL: How to turn Apple TV on and off with Siri Shortcuts

Aside from turning your TV on or off with using Siri, you’ll be able to control volume, change input, adjust brightness and more. The following controls are available to developers and users, programmatically in apps, via Siri voice commands, through Siri Shortcuts, in the Home app and via a new Control Center tile.

These controls are not yet enabled in the shipping version of the Home app.

MacStories editor-in-chief Federico Viticci has explained how this development might enable a solution that could bring HomeKit integration to older LG televisions:

Interestingly, Tian has already contributed an update to homebridge—the third-party plugin to add all kinds of different accessories and platforms to HomeKit—with support for HomeKit’s new TV control APIs.

Here’s where this gets really interesting for me: despite the launch of an online petition, LG has only confirmed that their latest 2019 TV sets will receive official HomeKit support. Thanks to homebridge, however, it should be possible to add native HomeKit integration to older LG televisions (such as my 2017 model) with plugins that bridge the webOS API to HomeKit’s new endpoints.

This is precisely what Tian is doing for his demo.

One more thing: in iOS 12.2, accessing your settings in the Home app displays a renamed section that now reads Allow Speaker & TV Access instead of the old Allow Speaker Access label, another indication that HomeKit is bringing Smart TV control. 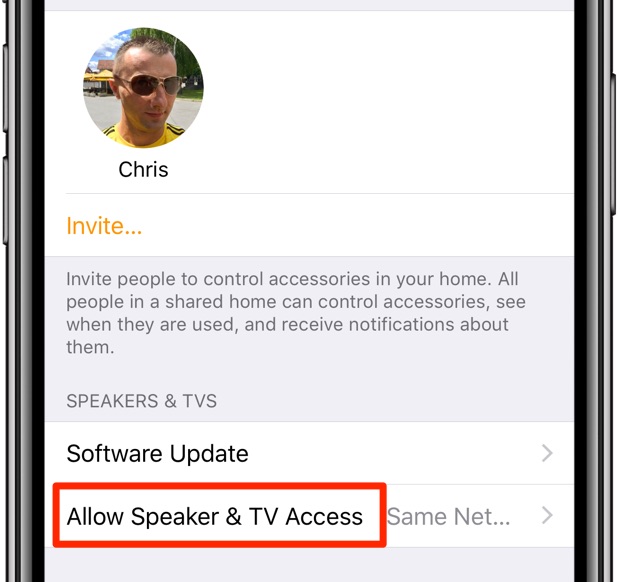 Additionally, there’s also a new widget in the Control Center interface on iOS 12.2 for controlling your HomeKit TVs, as depicted on the screenshot embedded below.

On a related note, the Apple TV Remote widget in iOS 12.2’s Control Center has been reworked to work in fullscreen mode and it no longer displays the large Home button.

What are your thoughts about these HomeKit changes in iOS 12.2?