Although not official as of yet, Apple’s HomeKit software framework for managing smart devices for the connected home apparently includes support for controlling power, volume, input source, brightness and so forth on compatible Smart TV sets.

That’s according to iOS developer Tian Z. who yesterday reported his findings on Twitter.

He pinpointed HomeKit’s TV features by combing through the file “plain-metadata-full.config” from the production release—support is there, it’s just not enabled yet.

These controls are not yet enabled in the shipping version of the Home app.

“Actual implementation to support that apparently was behind some #if macro, and not actually in current build,” wrote the developer. “But that plain text file contains service and characteristic definition”.

Yeah 😅 It would be nice if the software support will ship in 12.1.3 GM or 12.2 beta… Right now if you define a TV service, Siri already works for power apparently.

Tian explains that this will let developers access the aforementioned TV services and features programmatically. “The profile actually fits quite well with existing LG TV API so bridging support for old TV may not actually need too much work,” he added.

We know the basics of how HomeKit and AirPlay 2 will work on Smart TVs, but details are scant. Presumably, these controls tie with Siri so you can wake up the TV, crank up the volume, change the input source and more, all with your voice.

Software support for the above TV controls would also be needed for the Now Playing card in Control Center, so you could start/stop media playback on a TV, use the volume slider etc.

Right now, we only know that HomeKit support on Smart TVs lets you use Siri to request that a specific video be streamed to a specific TV set in a specific room, which automatically wakes the corresponding TV set if it was sleeping and starts AirPlaying to it.

Apple said ahead of CES 2019 that major TV vendors would add HomeKit and AirPlay 2 support (and not just TV makers—VLC media player, is getting AirPlay support, too).

Sony, Samsung, Vizio and LG have announced support for both technologies in their upcoming 2019 models, with some manufacturers promising to eventually bring AirPlay 2 and HomeKit support to select 2018 models via firmware updates.

Samsung is a notable exception here, for two reasons. 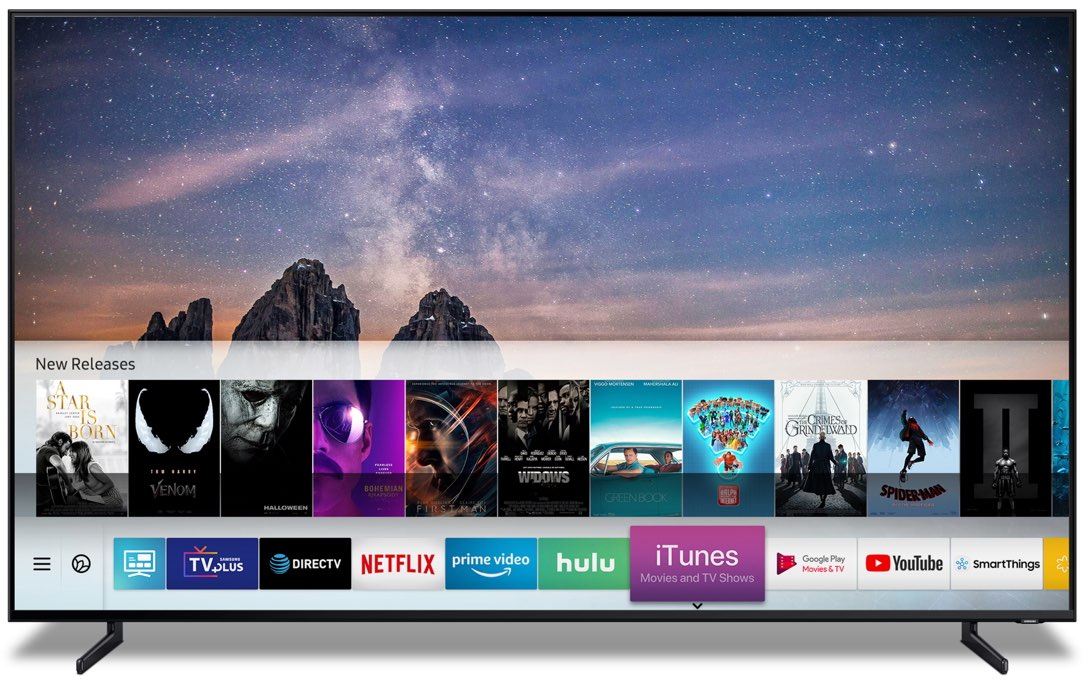 Firstly, Samsung-made Smart TVs will exclusively get a brand-new iTunes Movies & TV Shows app from Apple (it’s two separate apps on Apple TV) for streaming your iTunes purchases and rentals directly via the TV itself. And secondly, however, Samsung has noted that its Smart TVs won’t support HomeKit and as such won’t appear in the Home app.

“Looks like AirPlay 2 for TV is different from HomeKit support for TV,” Tian commented.

Aside from control a TV through Apple’s Home app or by asking Siri, even remotely, HomeKit makes a compatible TV set automatically appear in the Home app where it can be subsequently included in scenes or automations, just like any other HomeKit accessory.

Of course, Samsung could add HomeKit support later and Apple could bring the iTunes Movies and TV Shows app to other Smart TVs once Samsung’s exclusivity period runs out.