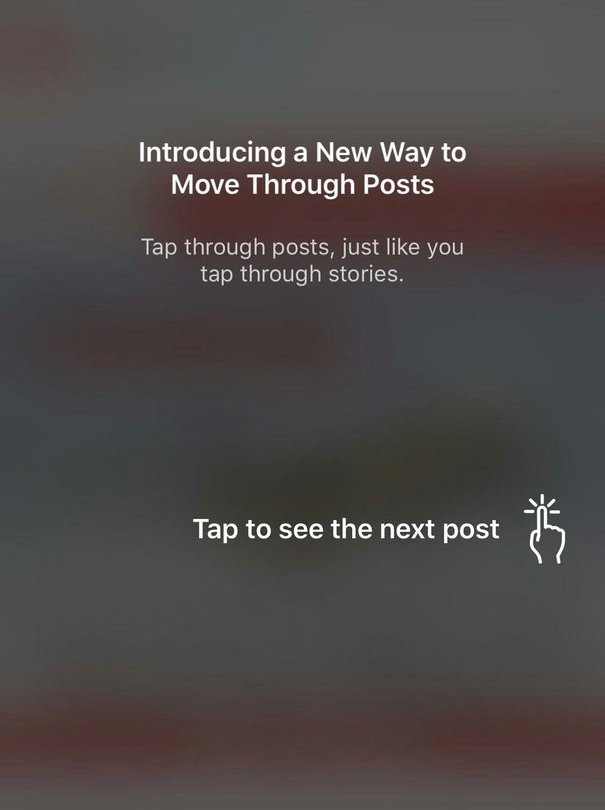 In October, iDownloadBlog was among first to report on Instagram’s horizontally scrolling design for posts in the Explore tab. That test has now expanded to the main feed, with a huge number of users in the UK and elsewhere spotting it on Thursday afternoon.

The company runs many tests and this one is an attempt at trying to eliminate thumb-swipe fatigue by letting people tap through posts in their main feed, just like with Stories. Tap-to-advance was of course pioneered by Snapchat so this seems to be yet another feature that the Facebook-owned service has borrowed from its rival.

According to TechCrunch, tap-to-advance for the main feed rolled out today, ahead of planned launch, due to a supposed bug. Instagram has now removed the feature but the company confirms it’s still testing that navigation style in Explore.

“Due to a bug, some users saw a change to the way their feed appears today. We quickly fixed the issue and feed is back to normal. We apologize for any confusion” a spokesperson said.

Head of Instagram, Adam Mosseri, acknowledged this morning: “Sorry about that, this was supposed to be a very small test but we went broader than we anticipated.”

Restarting the app should make these changes disappear.

Those who got the update saw this message: “Introducing a new way to move through posts. Tap through posts, just like you tap through Stories.” iDownloadBlog owner Sébastien Page confirmed to me this morning that he himself was enrolled in the test. “I was actually part of that test too but the app quickly reverted back to normal,“ he said.

Taylor Vandenberg has tweeted out a video showing it in action.

Many negative comments from frustrated users on social media indicate that this is definitely not one of those universally accepted and loved Instagram features.

Tap-to-advance makes it easier to move between posts with them staying fully in view, compared to scrolling where it can take some adjustment to make sure the top or bottom of a post isn’t cut off.

But scrolling revealed the author of a post first, then the content, then the caption, which is a sensible and intuitive way to browse. Tap-to-advance could send users’ eyes flitting around the screen in an exhausting manner. But most importantly, people have spent eight years growing accustomed to scrolling the Instagram feed. Suddenly breaking that behavior pattern was sure to piss people off.

Would you prefer it over standard scrolling? And if they roll this out to everyone, should there be an option to toggle between the horizontal and vertical scrolling designs, do you think?

Let us know be chiming in with your thoughts in the comments down below.