Managing your files in macOS, browsing network volumes, using Dropbox without downloading data to your Mac, sharing items between iOS devices and your computer and performing other file operations in the Finder—all those everyday tasks leave a lot to be desired. Enter Commander One, a free, productivity-focused Mac file manager from US-based developer Eltima that’s everything Apple’s annoying Finder wishes it could be, and then some more.

In the age of MS-DOS back in the ’80s, Norton Commander was all the rage.

Throwback to the ’90s: theme support in Norton Commander—that is, Commander One

But wouldn’t it be great if there were such thing as Norton Commander-alike file manager for macOS that gave you far better functionality than Apple’s aging Finder ever could?

Welcome to Commander One

Commander One is a free orthodox Mac file manager for the modern age (orthodox in a sense that it follows a two-panel paradigm) heavily influenced by Norton Commander.

Made entirely in Swift, Commander One is a fast and nimble piece of software which brings rich file manager functionality to your Mac. It rocks a double-pane layout that makes working with files a breeze. Make no mistake about it, this is a powerful app that will boost your productivity tremendously as opposed to Apple’s at times irritating Finder. 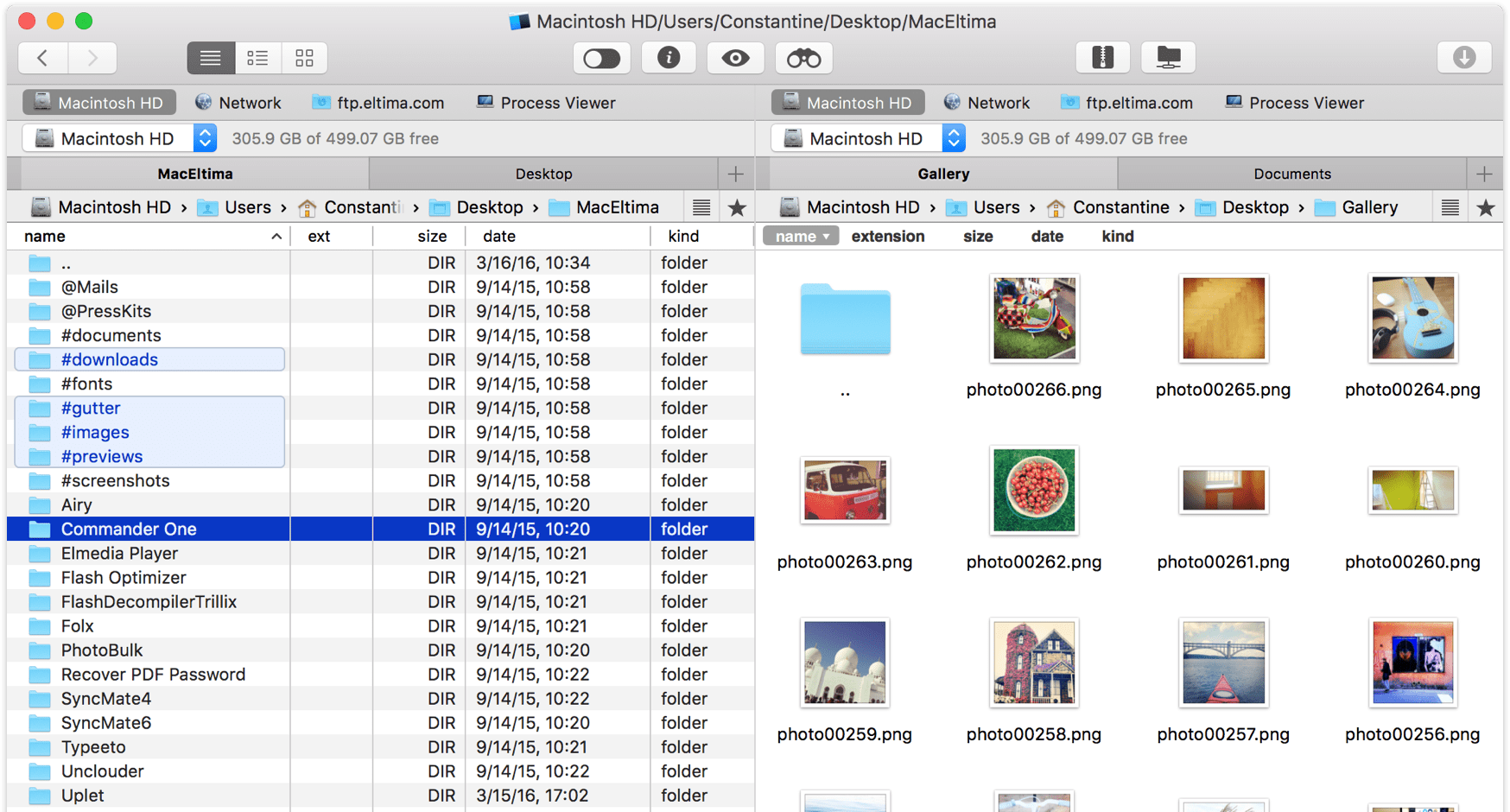 Productivity starts with a two-pane layout, unlimited tabs, three different view modes (Full, Brief and Thumbs, similar to Finder’s List, Column and Icon views) and a variety of sorting options that make copying files between destinations easy without needing to keep multiple Finder windows/tabs open and copy files between them, which is slow and cumbersome.

With multi-item selection, you can copy, move, delete and rename a group of non-contiguous files, and it all happens within Commander One so you don’t even have to open a single Finder window. You can even rename files and folders when moving them in one fell swoop.

Many devices, including DLSRs and video cameras, can be mounted in Commander One

Unlike the Finder, this app lets you open frequently-accessed files via a dedicated Favorites section or access previously accessed items in a handy History section. Pro users will like that most of the complex actions can be triggered with custom keyboard combinations. 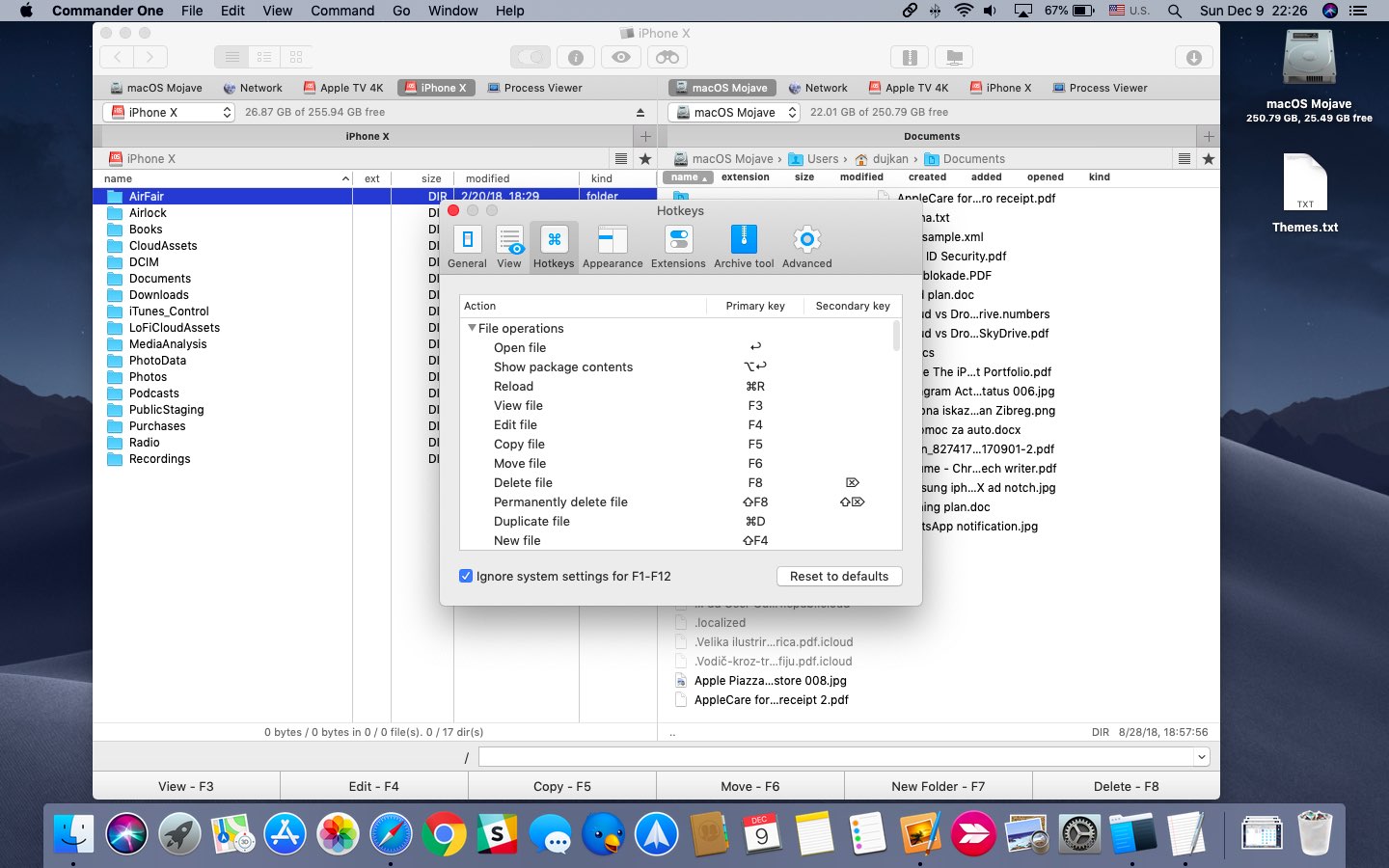 When browsing a bunch of files and folders, switch to a more convenient Brief view that doesn’t display file meta data, which speeds up operation significantly. Multiple file operations can be queued (including ones that have already started). The app runs file tasks in the background so you can easily work with multiple Commander One windows.

Even better, with Commander One you can compress and unpack files as ZIP, TAR, RAR or 7ZIP archives out of the box—no additional software needed. And whereas the Finder hides the system and hidden files from your view, Commander One treats them like normal files so you get full access to your Mac’s file system. You can toggle between showing or hiding hidden files with a click, no need to use Terminal commands for that!

macOS has Spotlight and Commander One has built-in search that automatically indexes contents of your documents and archives so you can find that needle in the haystack by typing relevant keywords, search for the words inside a document and even choose text encoding. 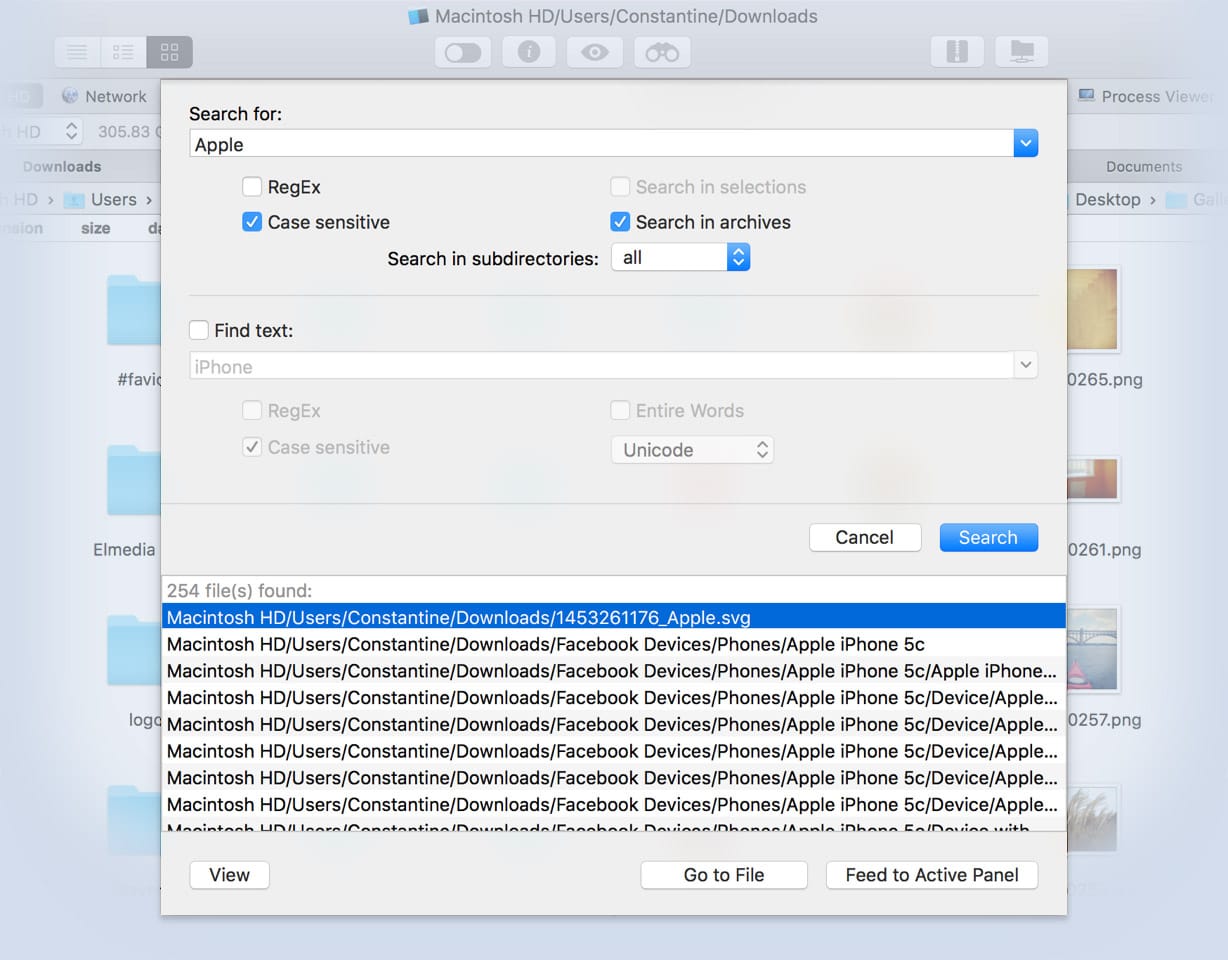 It supports regular expressions for doing more precise searches that are case sensitive.

Aside from local files, you can access your NAS devices, connect to remote servers via FTP, SFTP or FTPS (and change remote file permissions with these protocols), retrieve data from iOS and Android devices connected by wire or wirelessly, mount an unlimited number of Dropbox accounts and more—all without ever leaving Commander One. 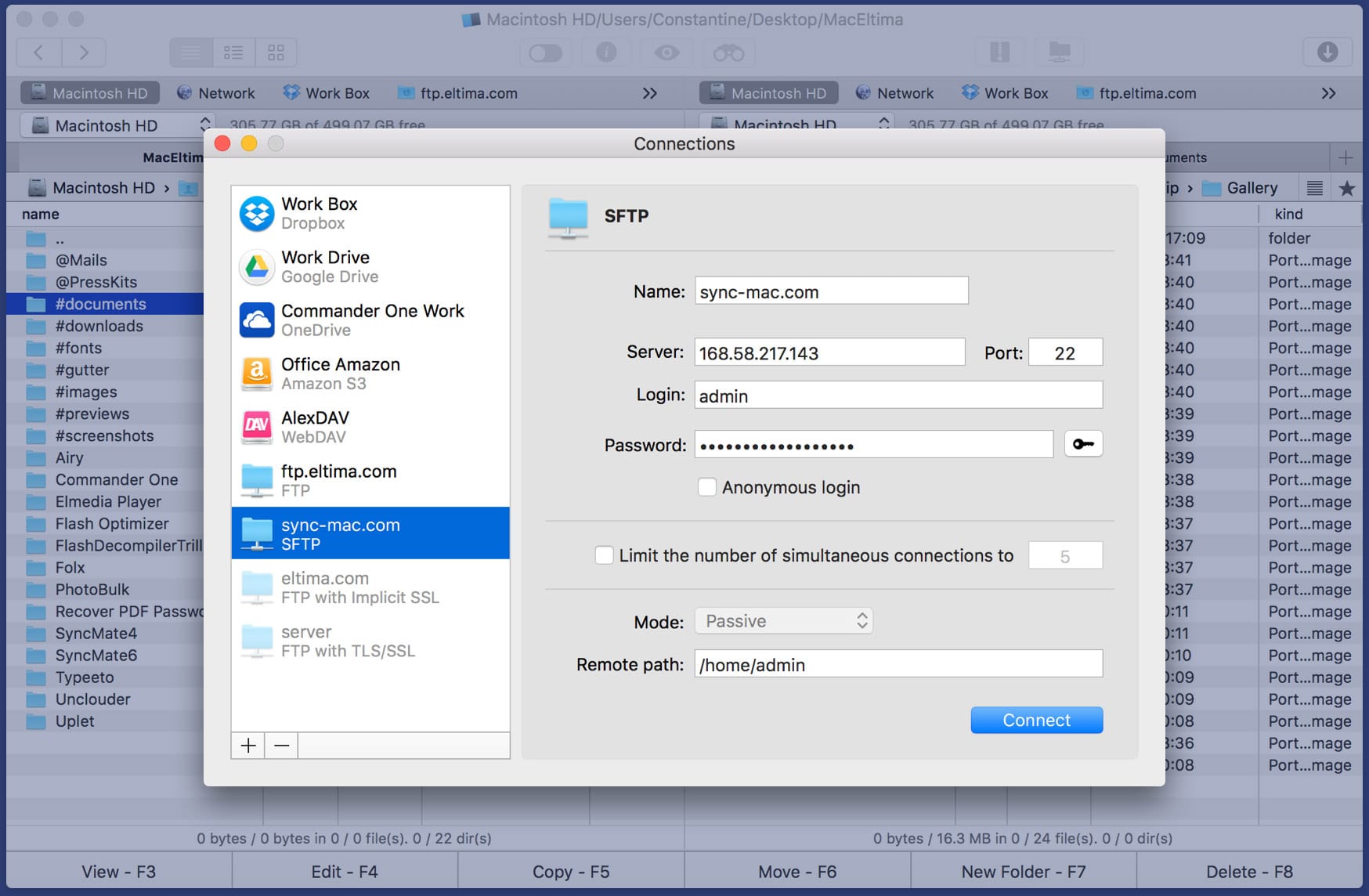 Access your online files with FTP and WebDAV support

FTP support is especially robust, allowing the app to double as your FTP client.

With full protocol support, you can transfer and share your files via FTP, SFTP or with full FTPS for maximum security. Even better, once you map your FTP server as a local drive, Commander One is able to work with your remote files as if they were located on your computer.

You can use drag and drop to move files between multiple FTP servers, performa common file operations like copy, delete, create, edit and so forth.

Working with iOS and Android files

If you loathe iTunes, mount your iPhone as an external drive to access iOS’s User and Media folders to transfer photos, videos and other data by way of drag and drop. It works with IPA (iOS), APK (Android), JAR and EAR (Java archives) and WAR (Web Application Resource) file types just like with regular folders, no need to extract anything or use special apps. 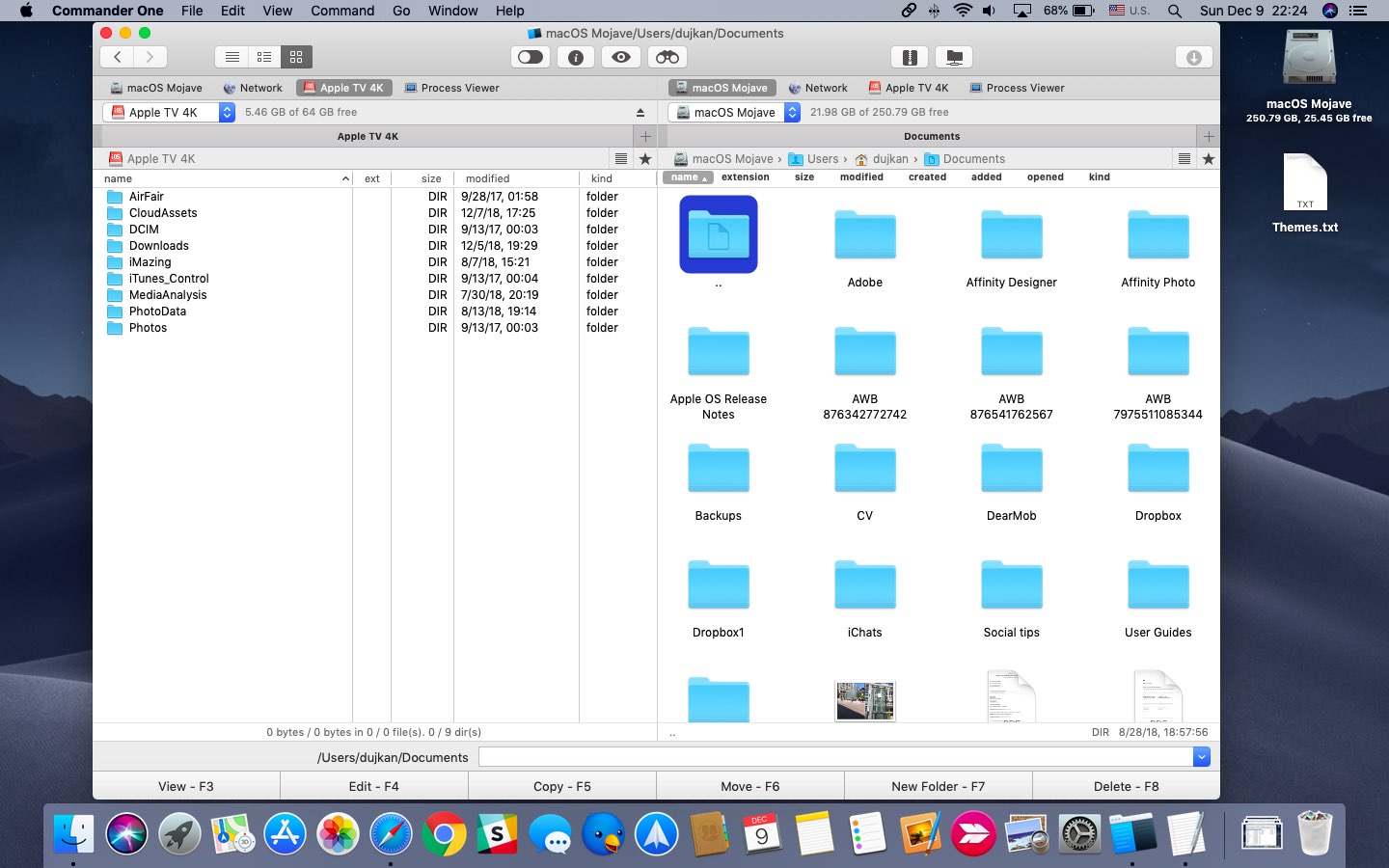 You can preview any supported item without opening it (including hex and binary files) via an internal viewer or Apple’s QuickLook or Preview, the choice is yours. And if you run your own blog, editing those htaccess, robots.txt and other website configuration files with Commander One will be a cinch.

Tobust Android file transfer support lets Mac and Android get along so you can move content from your Mac to an Android smartphone, tablet or another device with drag and drop.

Thanks to MTP mode, you get an even easier access to your Android device when using wired USB connections—just connect your device in MTP mode to the computer and it will become automatically available as a mounted drive in Commander One.

And because Commander One supports mounting Android devices, you can actually watch movies, check photos or listen to the music on the Android device without needing to copy content to your computer beforehand.

It’s especially cool that Dropbox Business is supported with extensive security features. Dropbox support works without needing to install Dropbox’s desktop syncing client. This lets you do things like move items between multiple Dropbox accounts or cloud providers without having to download them first. 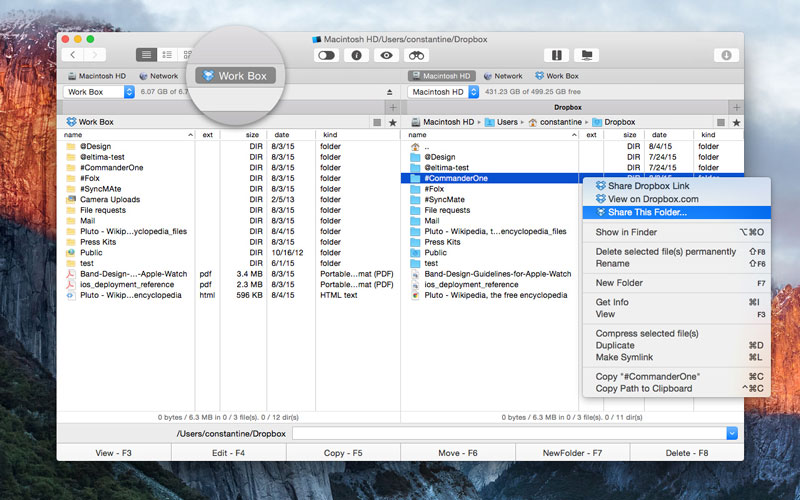 Accessing files in your Dropbox directly in Commander One

Commander One also integrates with other popular cloud-storage services, such as Amazon S3, Google Drive and OneDrive. This makes it really convenient to manage your cloud files and folders directly, without copying any data on your Mac.

And last but not least, a rich app like this would be useless if you had to adjust your workflow in order to use it efficiently. Thankfully, that’s not the case because Commander One is highly customizable via a Preferences menu where you can customize the hotkeys, default apps, adjust settings for the built-in archiver, switch themes, change the file list font, cursor and background color, selection color and more—to truly make it your own.

Customizing hotkeys to your liking will make you even more productive

Other perks include viewing the list of active system processes, adjusting defaults for the Finder’s “Open With” contextual menu, WebDAV connection mapping for quick access to your online files, the ability to share Dropbox files as links with just a few clicks, and more.

There are probably more capabilities included in Commander One than you can explore. 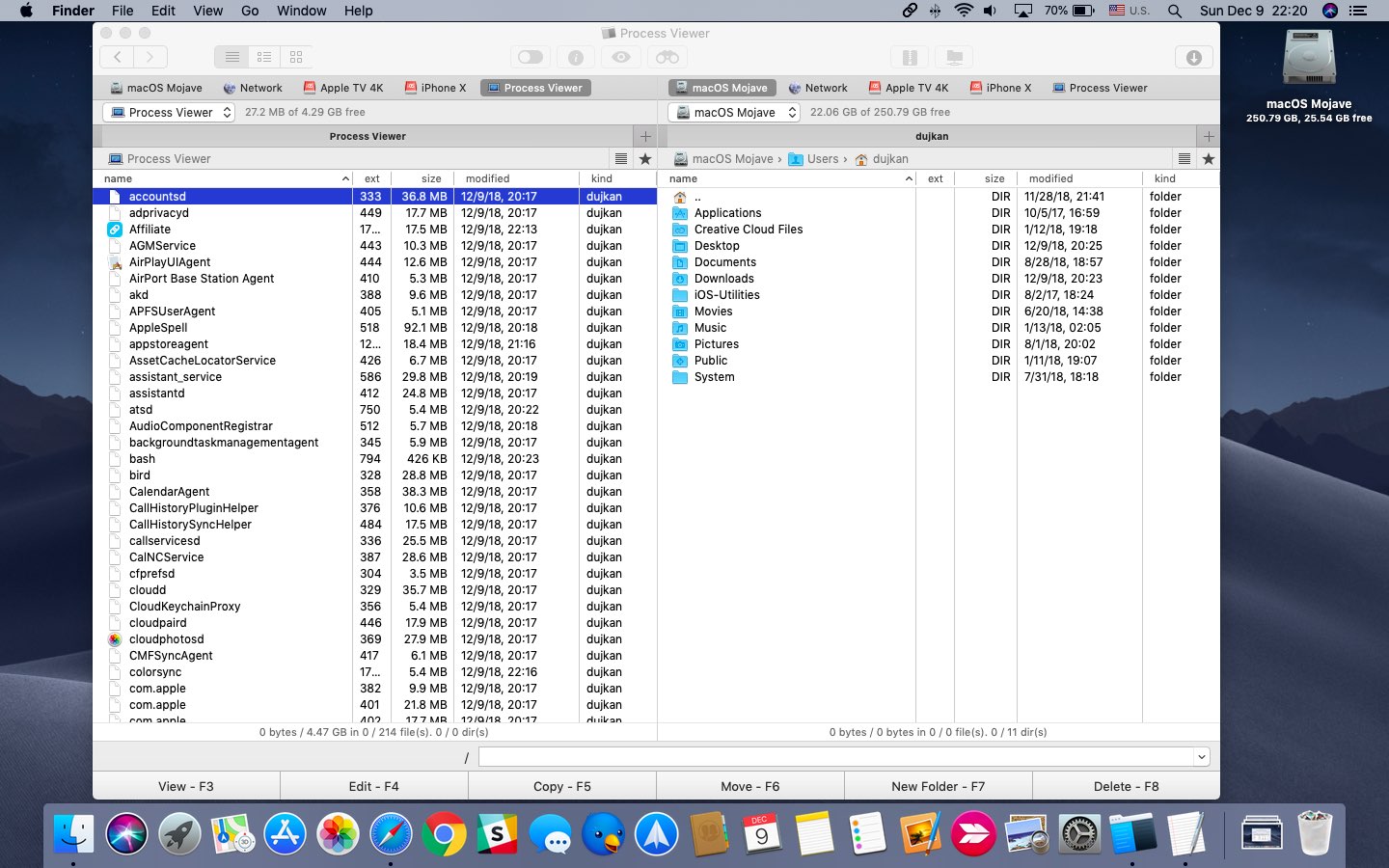 This is just a taste of all the goodies that this capable file manager brings to the table. For the full breakdown of all the features in Commander One, visit the official website.

To pre-empt your possible question: Commander One is a full-on dual-pane file manager rather than more of an “overlay” software like, say, PathFinder is, so there’s that. 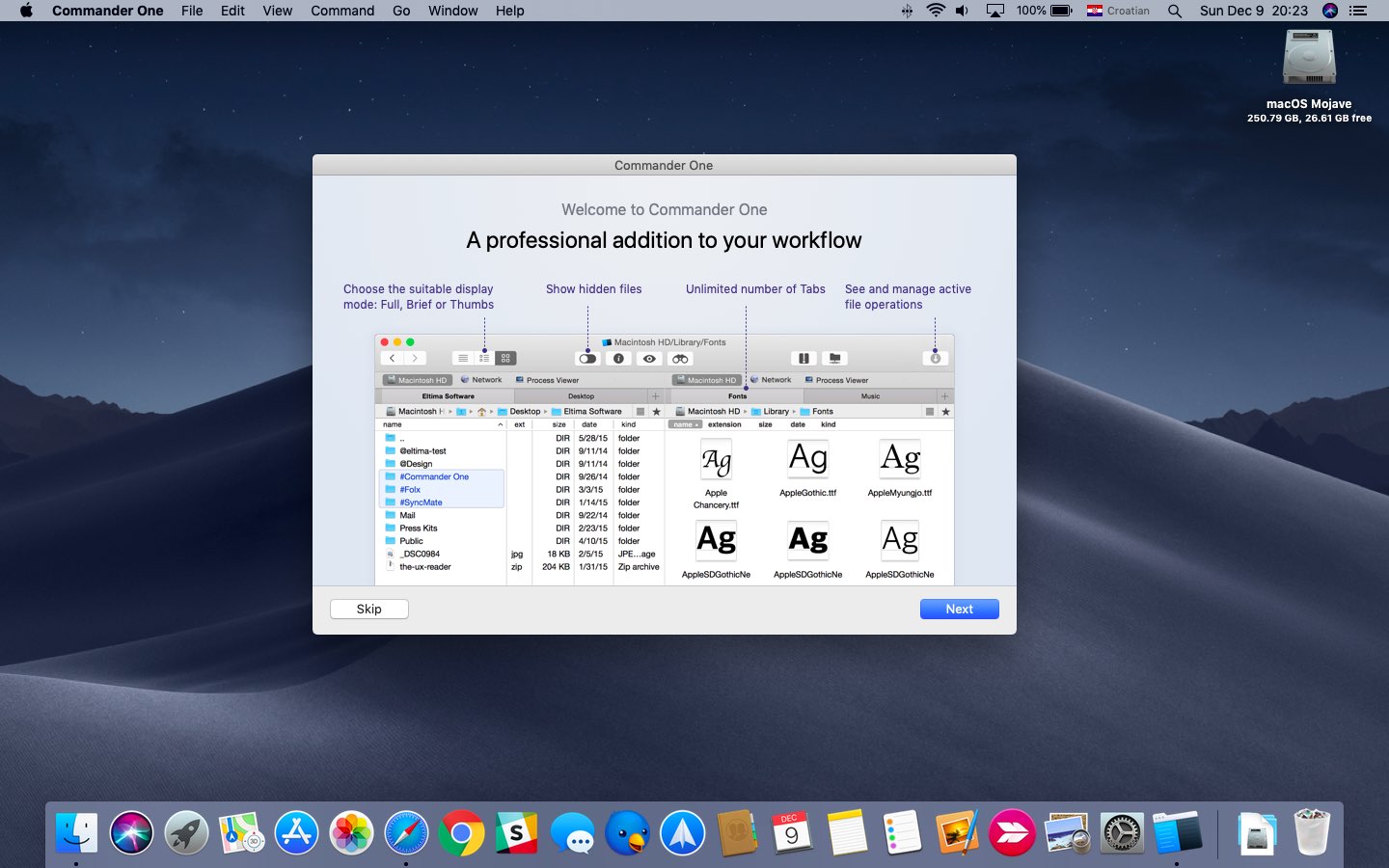 You’ll feel right at home in Command One

One thing is certain: if you’ve been on the lookout for a more elegant, faster and more convenient way to work with files on your Mac, look no further than Commander One. Not only will this app make your workflow smoother, you’ll be more productive and save precious time as a result of incorporating it into your daily routine.

Commander One is free to download. You can use all its features without restrictions for 15 days before the more advanced ones get locked behind a Pro upgrade, stuff like the built-in FTP client, archiver, Terminal emulation and additional perks like browsing iOS/Android devices, theming and Dropbox integration and sharing Dropbox links. 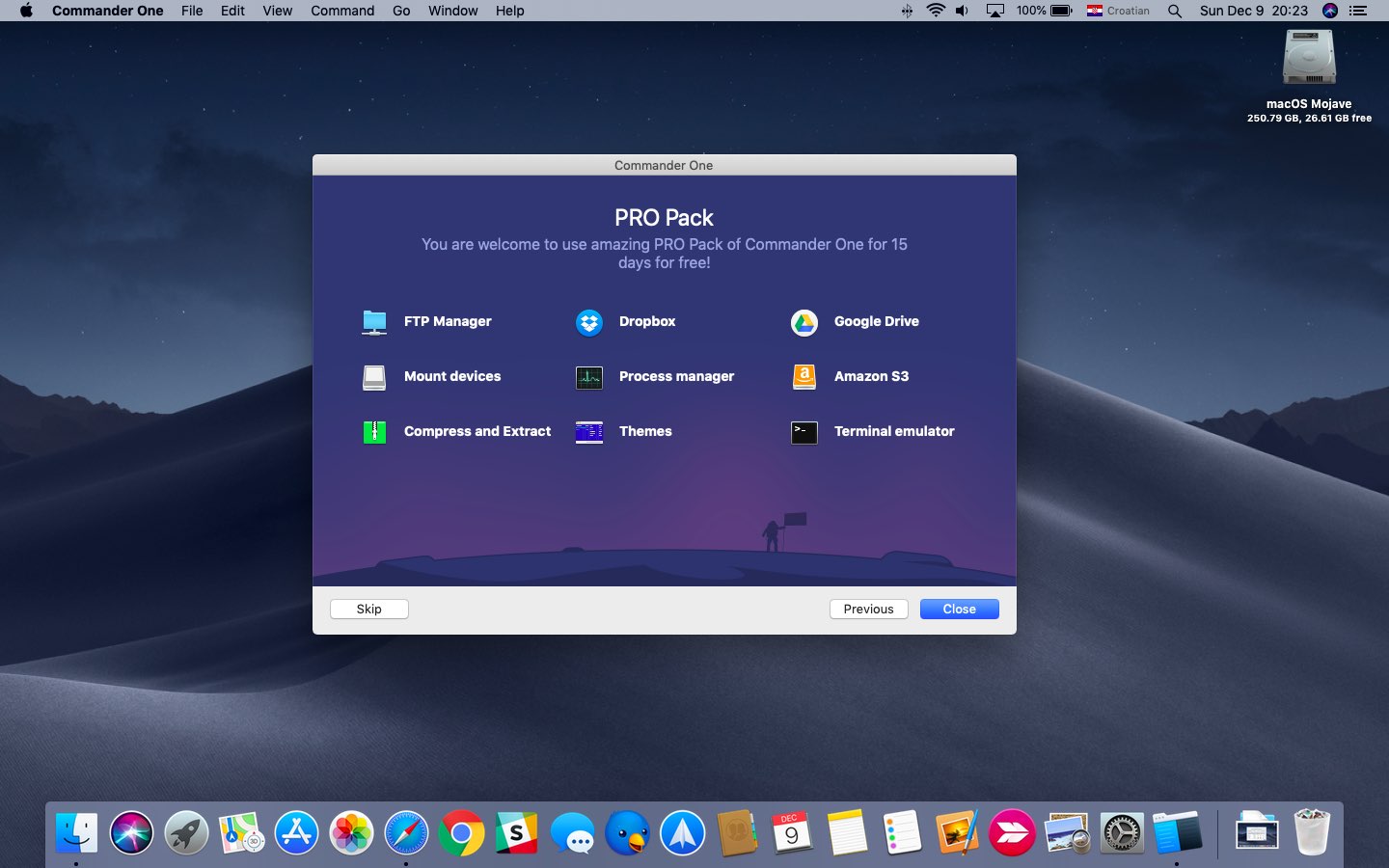 Benefits of upgrading from free to Pro edition of Commander One

Commander One is available from Mac App Store as a freemium download. A one-time $29.99 in-app purchase unlocks the Pro edition following your 15-day trial period (licenses are also available from the Eltima website).

Alternatively, get the $29.99 Pro edition right away by downloading Commander One Pro.

The app is fully compatible with OS X Yosemite 10.10 or later.