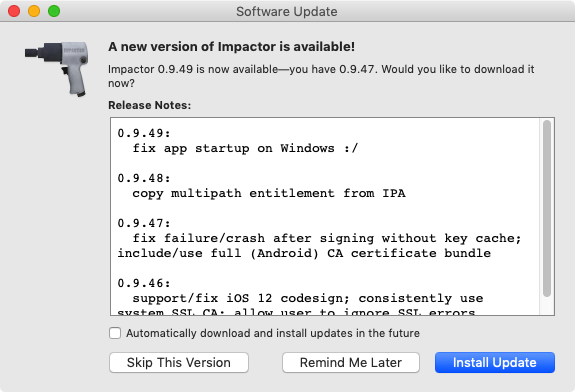 Cydia Impactor is a utility created by Saurik (Jay Freeman) for side-loading apps onto your iPhone or iPad; it’s commonly used by semi-untethered jailbreak solutions to install the app that hacks your device.

That said, it’s no surprise that we’re seeing updates for the utility following the launch of the unc0ver jailbreak tool for iOS 11.0-11.4 beta 3. Saurik quietly released two updates for Cydia Impactor on two separate occasions over the weekend with bug fixes and performance improvements.

In the first update, dubbed version 0.9.48, Cydia Impactor received a patch encompassing the multipath entitlement exploit used by the unc0ver jailbreak tool. Some users were having trouble getting the exploit to work correctly; however, the latest Cydia Impactor update, paired with unc0ver RC6, should resolve this problem.

In the second update, dubbed version 0.9.49, Saurik addresses an issue that would prevent the Cydia Impactor utility from launching on Windows-based machines. That said, the latest version now works seamlessly on all compatible operating systems, including macOS, Windows, and Linux.

Have you downloaded the newest version of Cydia Impactor yet? Share in the comments.