We’re excited that AirPlay 2 is fully here after basically a year of waiting for it. The latest Apple OS updates bring stereo playback to HomePod and multi-room playback in its official form.

With AirPlay, you can stream music, videos or just about any app running on your device, including games, from any Apple device to your Apple TV or AirPlay-enabled speakers.

AirPlay 2 is available on iPhone, iPad and iPod touch with iOS 11.4 or higher.

On your HomePod, AirPlay 2 requires the HomePod firmware version 11.4 or newer. Macs actually will not be getting AirPlay 2 support, not in macOS High Sierra 10.13.5 or 10.13.6. That’s because AirPlay 2 relies on HomeKit, which Macs don’t not support yet either. On the fourth-generation Apple TV and Apple TV 4K, AirPlay 2 requires tvOS 11.4 or higher.

AirPlay 2 is slated to come to select third-party speakers and Hi-Fi receivers, and there’s some chatter about a supposed future Beats speaker with AirPlay 2 functionality. Let us show you how to use HomePod stereo pairing and multi-device AirPlay 2 streaming.

If you’ve used AirPlay, you already know how to use AirPlay 2.

Accessible from Control Center when listening to music or watching video, AirPlay 2 makes it a cinch to select or unselect multiple devices to which your media is being streamed. 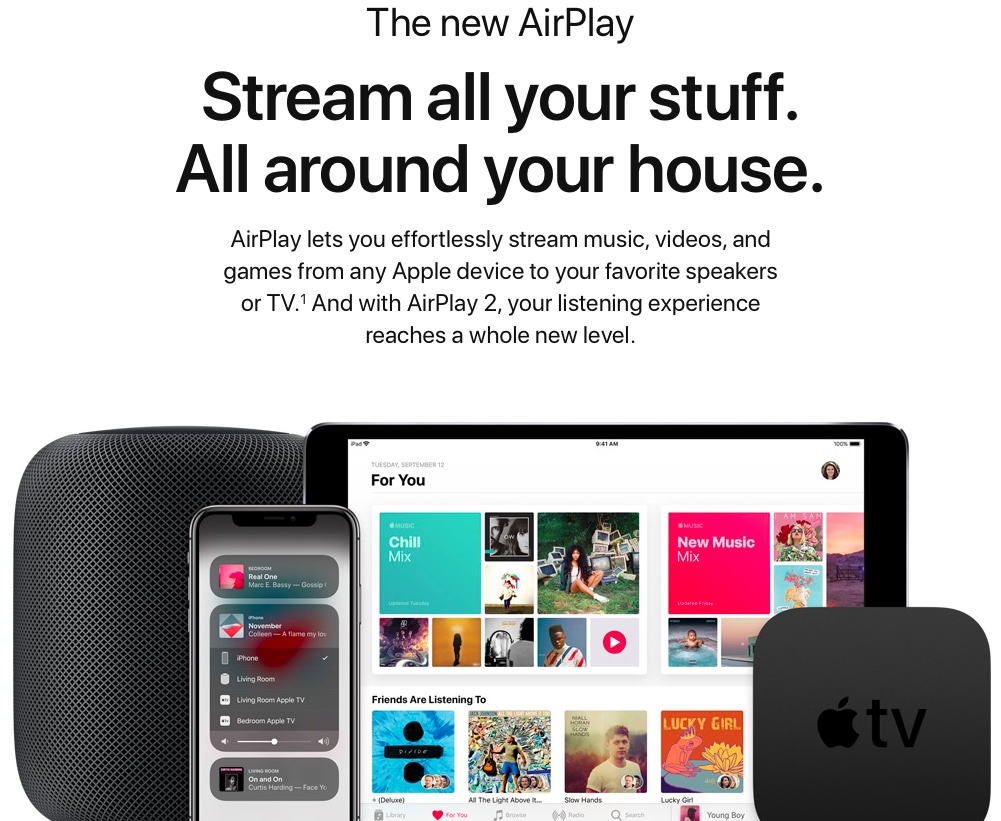 AirPlay 2 controls are also accessible from within supported apps, bringing you quick access to what’s playing in every room on every speaker. Last but not least, any speakers connected to your Apple TV automatically appear in the Home app as AirPlay 2 targets.

Just like iPhone and iPad, HomePod will be able to communicate with other AirPlay 2-enabled speakers when they become available so Siri can control music playing on speakers from Bang & Olufsen, Bluesound, Bose, Bowers & Wilkins, Denon, Libratone, Marantz, Marshall, Naim, Pioneer and Sonos.

And now, watch this video covering everything there’s to know about AirPlay 2 for HomePod, iPhone, iPad, Apple TV and more, including how it works, what it is and what it’s not.

Are you glad that AirPlay has been fully fleshed out and that it’s finally here?

Have you tried it yet? If so, what did you think of it?