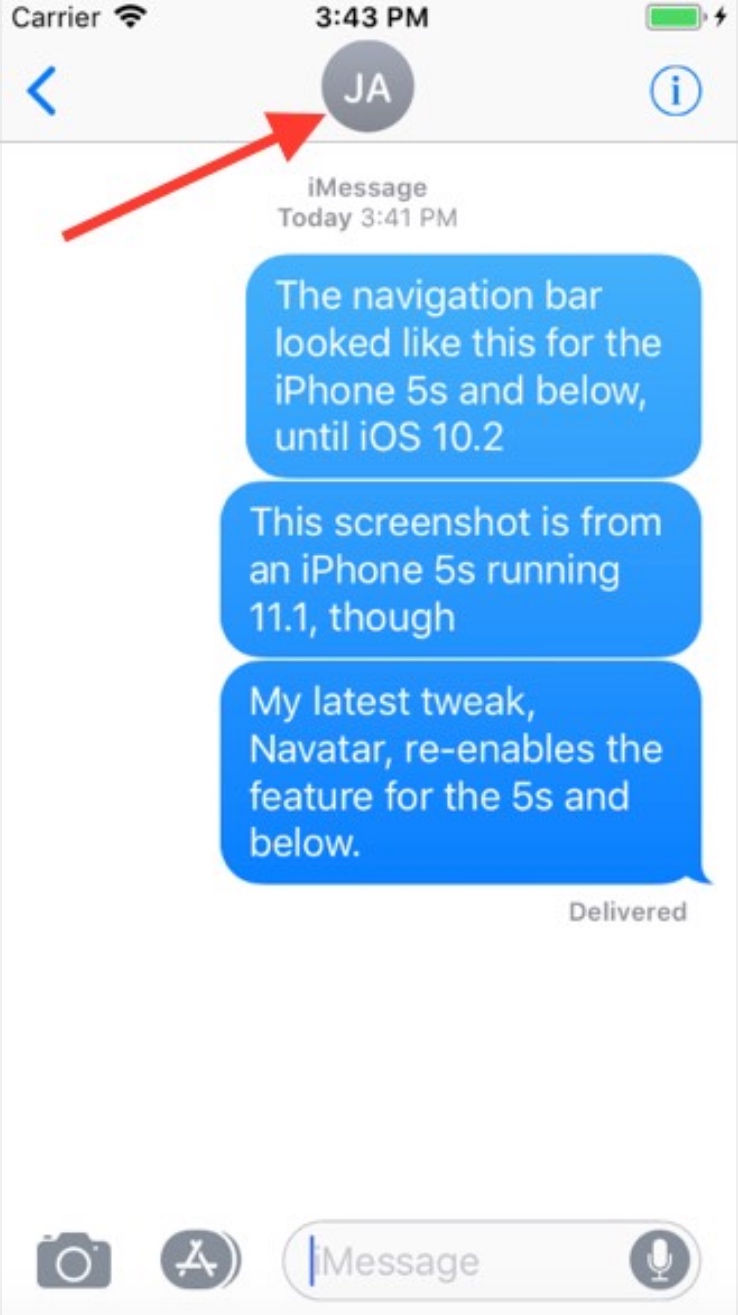 If you use the native Messages app to send iMessages or SMS messages from your iPhone, then you may have noticed the avatar that generally appears in the navigation bar. When you have a contact picture configured for the recipient, that picture displays here; otherwise, you’d see the recipient’s first and last initials instead.

Apple stopped supporting this feature on smaller handsets like the iPhone 5s and earlier with some of the latest iterations of iOS, limiting it to larger-displayed devices such as the iPhone 6 and later. On the other hand, a new free jailbreak tweak dubbed Navatar by iOS developer EthanRDoesMC changes that.

Citing the developer of Navatar, Apple pulled this feature from the iPhone 5s and earlier starting with iOS 10.2 and later. That said, installing the tweak restores the avatar in the Messages app’s navigation bar so that the interface looks more like the example above.

Navatar isn’t a groundbreaking tweak by any stretch, but it’s certainly nice to have user interface consistency across all your devices. That said, if you own an iPhone 6 or later and appreciate this feature for face value, then you now have the option to enjoy it on your smaller handsets as well.

Right out of the box, Navatar doesn’t come with any options to configure. Just installing it makes the necessary changes to your handset, and that’s all there is to it. You can always hide the avatar from your navigation bar again by uninstalling Navatar from Cydia.

Notably, Navatar should only be deployed on the iPhone 5s or earlier with jailbroken installations of iOS 10.2 or later. There’s no reason to install this tweak on any iPhone 6 or later, nor on any handset running firmware older than iOS 10.2.

If you would like to try Navatar out for yourself, then you can download it for free from Cydia’s BigBoss repository.

Do you like or dislike the recipient’s avatar appearing in your Messages app’s navigation bar? Let us know in the comments section below.