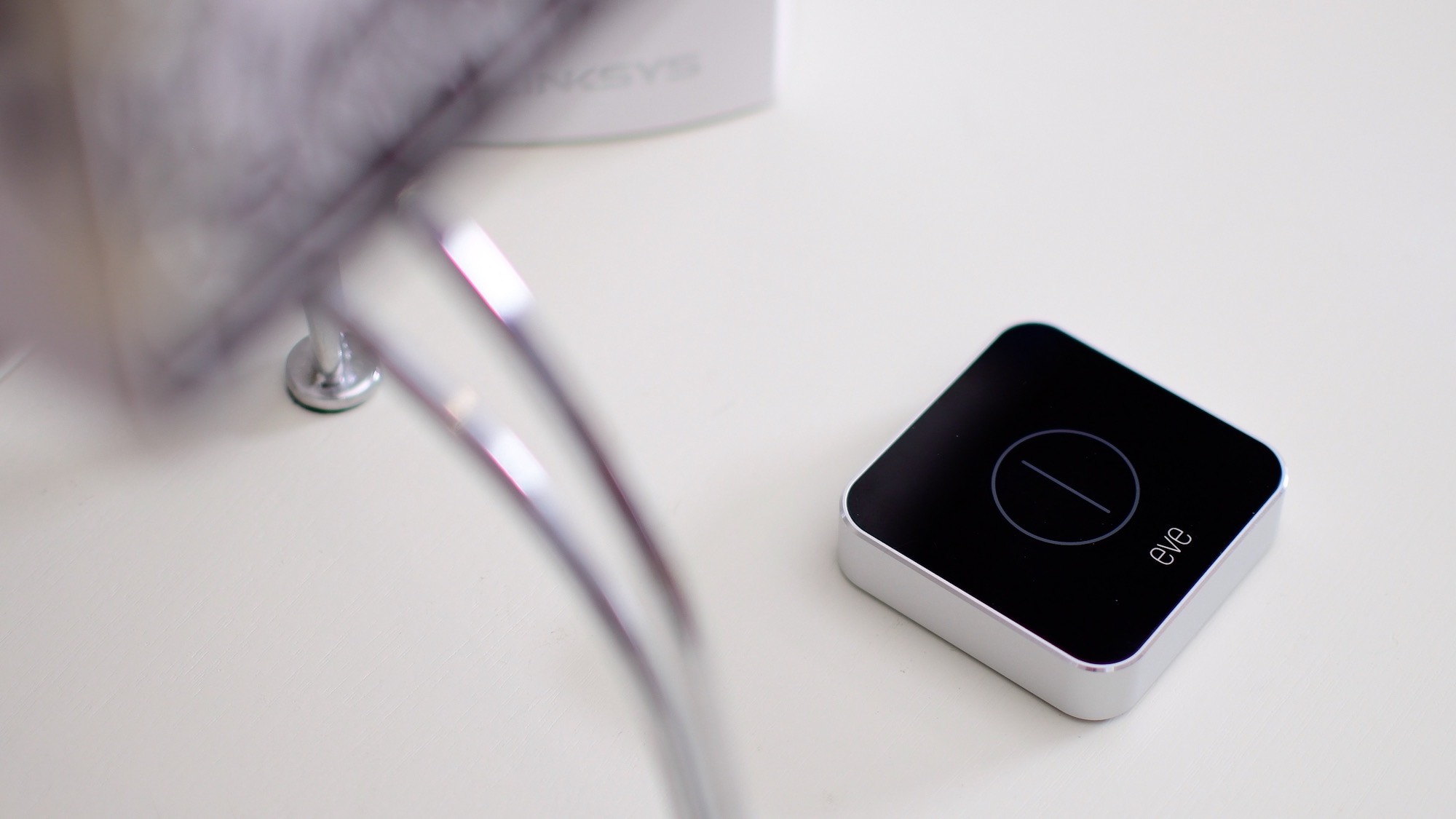 One crux of the Smart Home is being able to control your home through physical means, and not just through automation and virtual assistants. The Eve Button from Elgato is a simple, and stylish, way to control your HomeKit accessories and scenes.

As per usual, I’ve put together a video for those who would rather watch.

We cover the Eve Button itself, as well as walk you through the setup. Then we compare it with the Eve Degree and another popular HomeKit button, the Pop from Logitech.

Let’s break down the Elgato Eve Button to see what it can do, and if it is worth it.

A button for your smart home

So what is the Eve Button?

It’s a small aluminum and plastic enclosure that allows you to control your HomeKit-enabled home. There are three different controls triggered by a single press, double press and a long press, and each command can be set up to control a single accessory, a set of accessories, a HomeKit scene or several scenes at once. 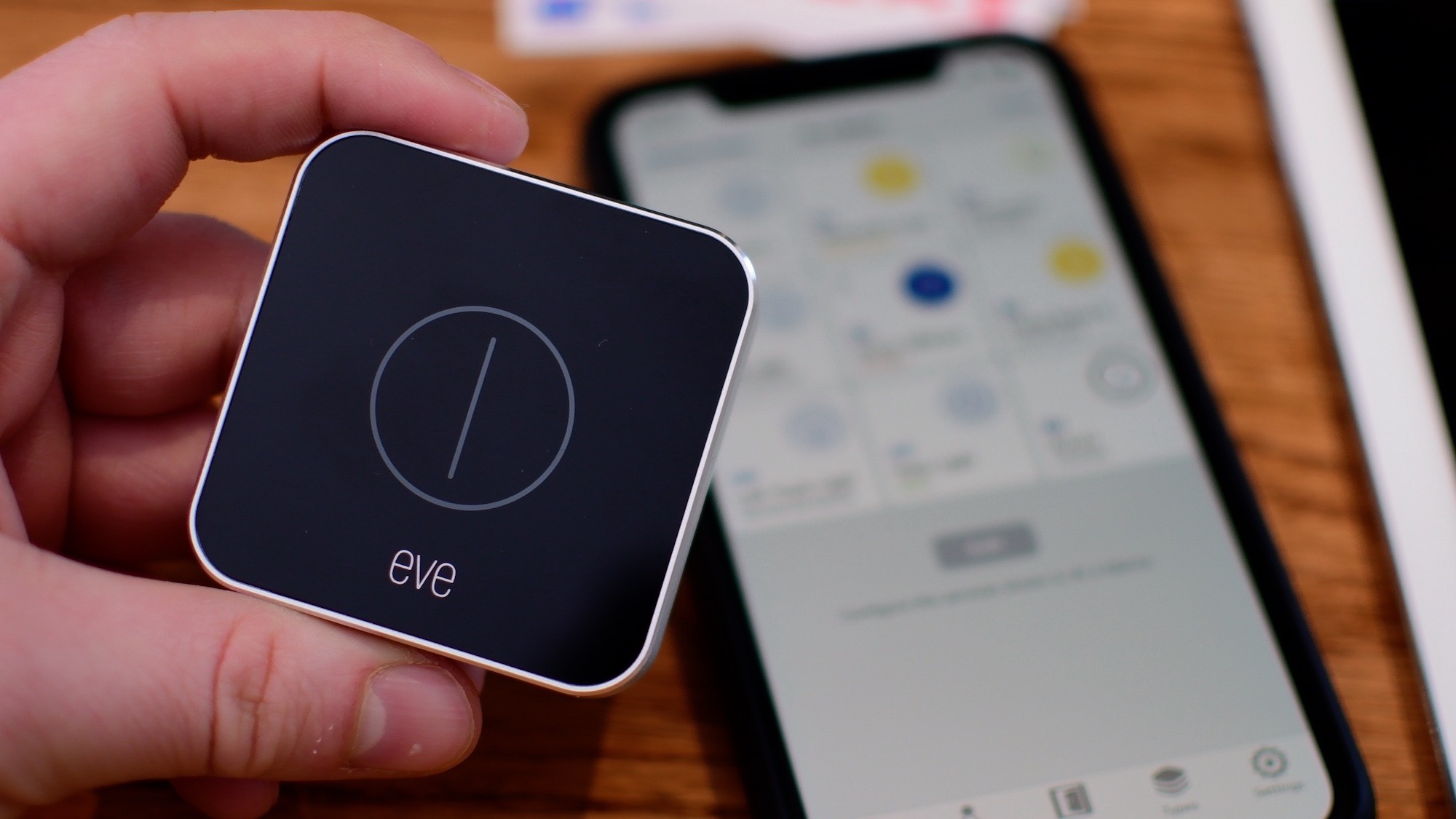 As an example, I have one press turning on my living room lights, a double press turn on the kitchen lights (as the rooms are connected) and a long press turns both rooms off. This device operates entirely over Bluetooth, with no hub or bridge necessary, and is powered off a single CR2032 cell battery.

The design is quite simple with an anodized aluminum frame, chamfered edges on the front and a black plastic front. If you’ve seen Eve Degree, the design will be instantly familiar.

It also looks very much like the upcoming Eve Room 2.

The setup process is very similar to other HomeKit accessories.

You can use the Home app or Elgato’s Eve app to set up your Eve Button. Normally, I shy away from manufacturers apps. That being said, I’ve actually always been impressed with Elgato’s first-party app.

You simply launch either app, tap on the Add Accessory option and then scan the HomeKit QR code printed on the back of your Button (that’s a new form of HomeKit pairing in iOS 11). Previously, HomeKit codes were just a set of digits that needed to be manually typed into the Home app. 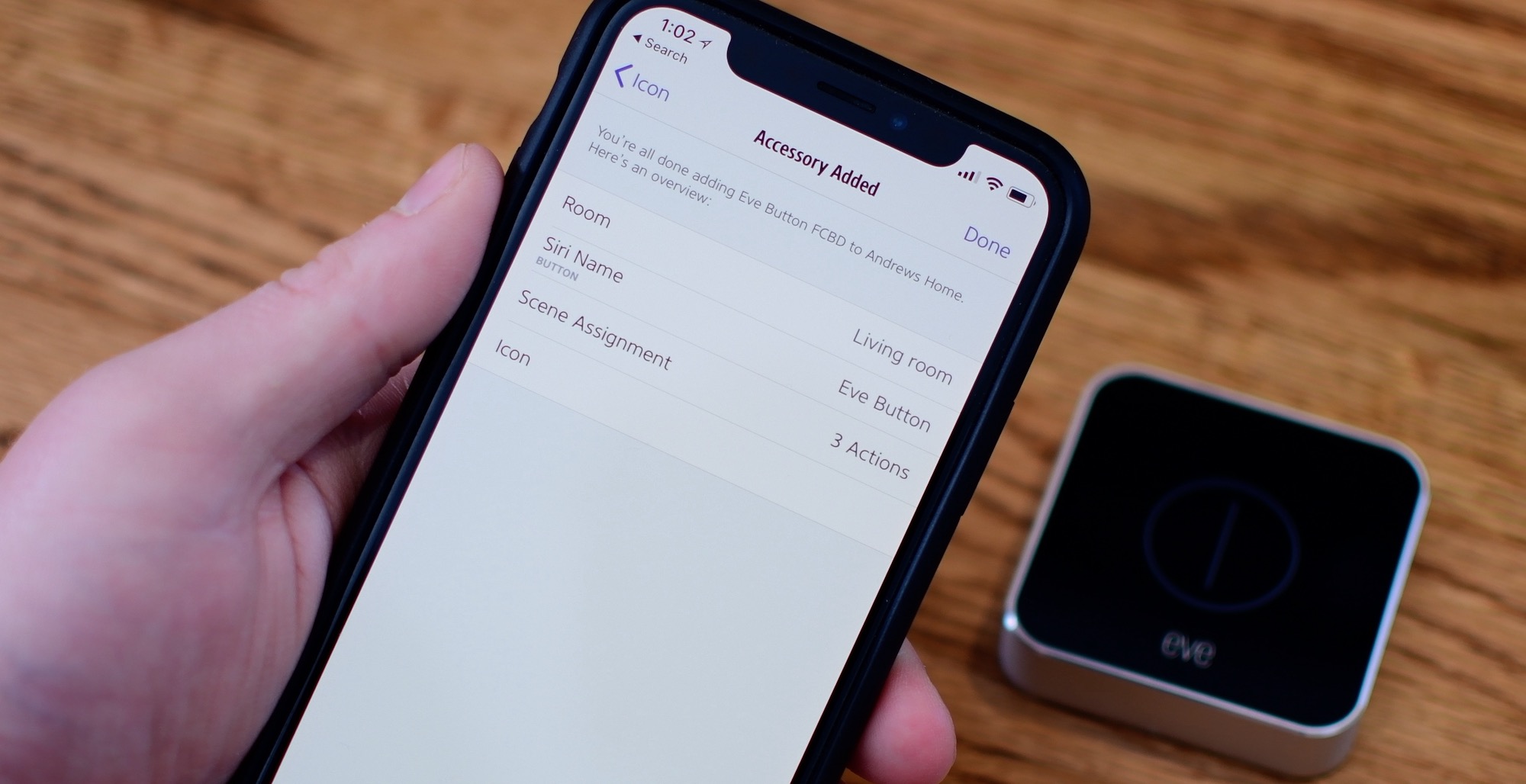 You then choose a room, give the device a name and set up the three commands.

These commands can be nearly any HomeKit accessory—say, turning on some lights, closing the shades, opening the garage, locking the door, adjusting the thermostat, turning off the ceiling fan and so forth.

You aren’t limited to just one of these accessories: the gadget can control several accessories at once or lump them together into HomeKit scenes. If you use the official Eve app, you’re required to choose scenes as your form of automation. However, Apple’s Home app lets you choose individual accessories and scenes.

Using it is pretty straight forward: you press the button and the saved action happens. When you first set your Button up, it may take a bit for the configuration to propagate through the system. It took quite a few minutes after the initial setup to begin to control my accessories.

Personally, I think physical buttons like this are 100% necessary in any smart home because not everything can be driven off an automation. Besides, you may also have guests over who don’t have access to your Siri to turn the lights on or open the shades. 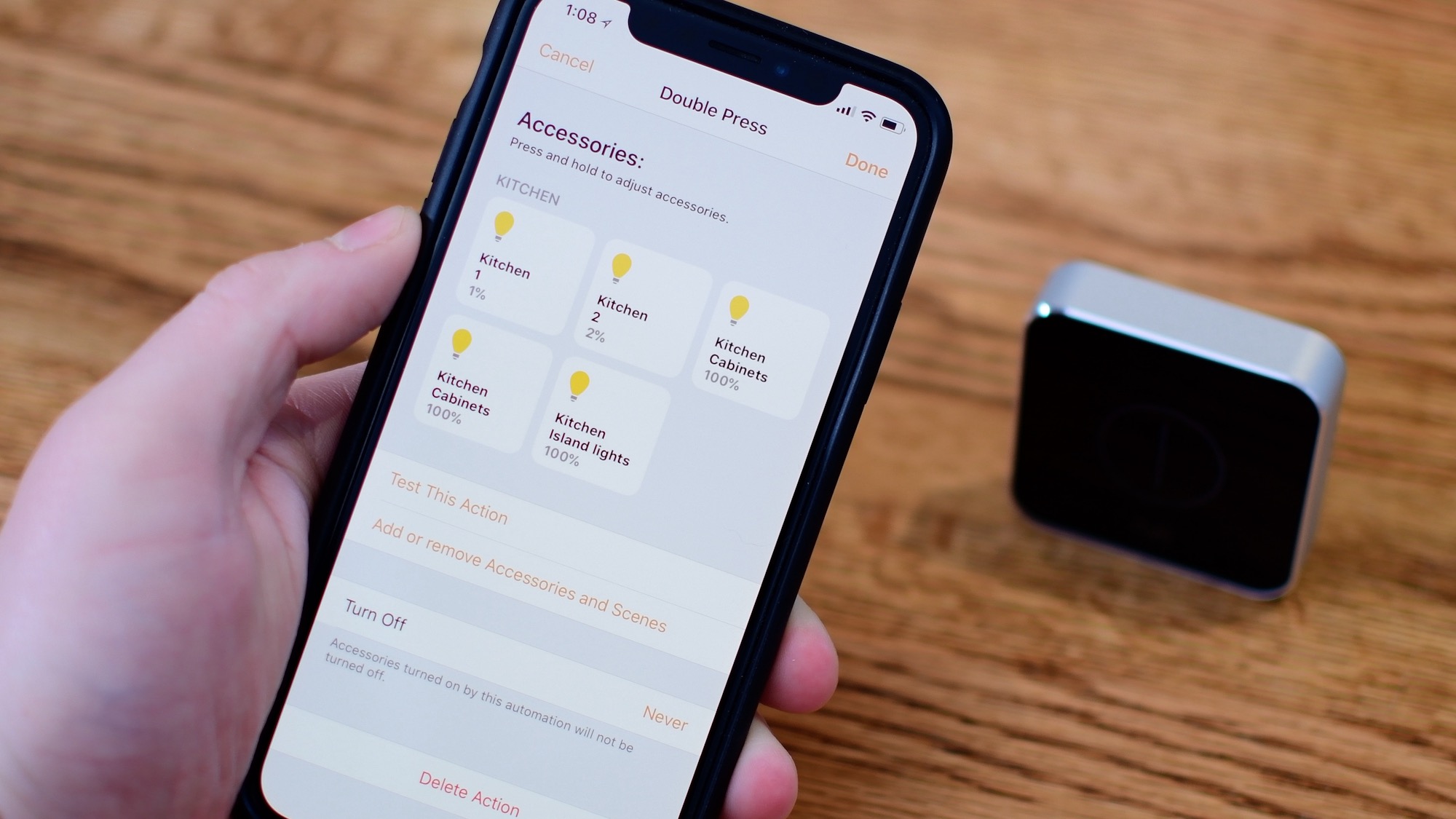 There seems to always be one issue with buttons: controlling the on/off state.

Say I press the button and have it set to turn on my living room lights. How do I get them off? I’d have to set up a completely second command to turn all of the lights back off. This seems like a waste when you only have three commands to use.

One way around this is to set up the commands to automatically revert themselves after a set number of minutes. So you press the button, lights go on and then turn off after an hour.

Other than that, the product is responsive and very easy to use. With only three commands (a limitation Apple has imposed on manufacturers), it’s easy to remember what each command is.

There are currently but two options as far as HomeKit buttons go: the Logitech Pop or the Eve Button.

The biggest difference is that Elgato’s product doesn’t require a bridge and instead communicates through Bluetooth. The Logitech Pop, which we also reviewed, communicates with a bridge over RF and the bridge itself connects to your Wi-Fi.

They both seem to work equally as well, though I would say Eve is slightly more reliable. The Pop does have a higher upfront cost (because of the bridge), but add-on buttons are actually a bit less than the Eve.

I’ve had a HomeKit-compatible home for quite some time and the constant line I hear from my girlfriend is “Sometimes I just want to press a button, ok!?” This Eve Button is an easy way to make that happen, involving significantly less effort than replacing a wall switch. As a bonus, it actually has more versatility to it. 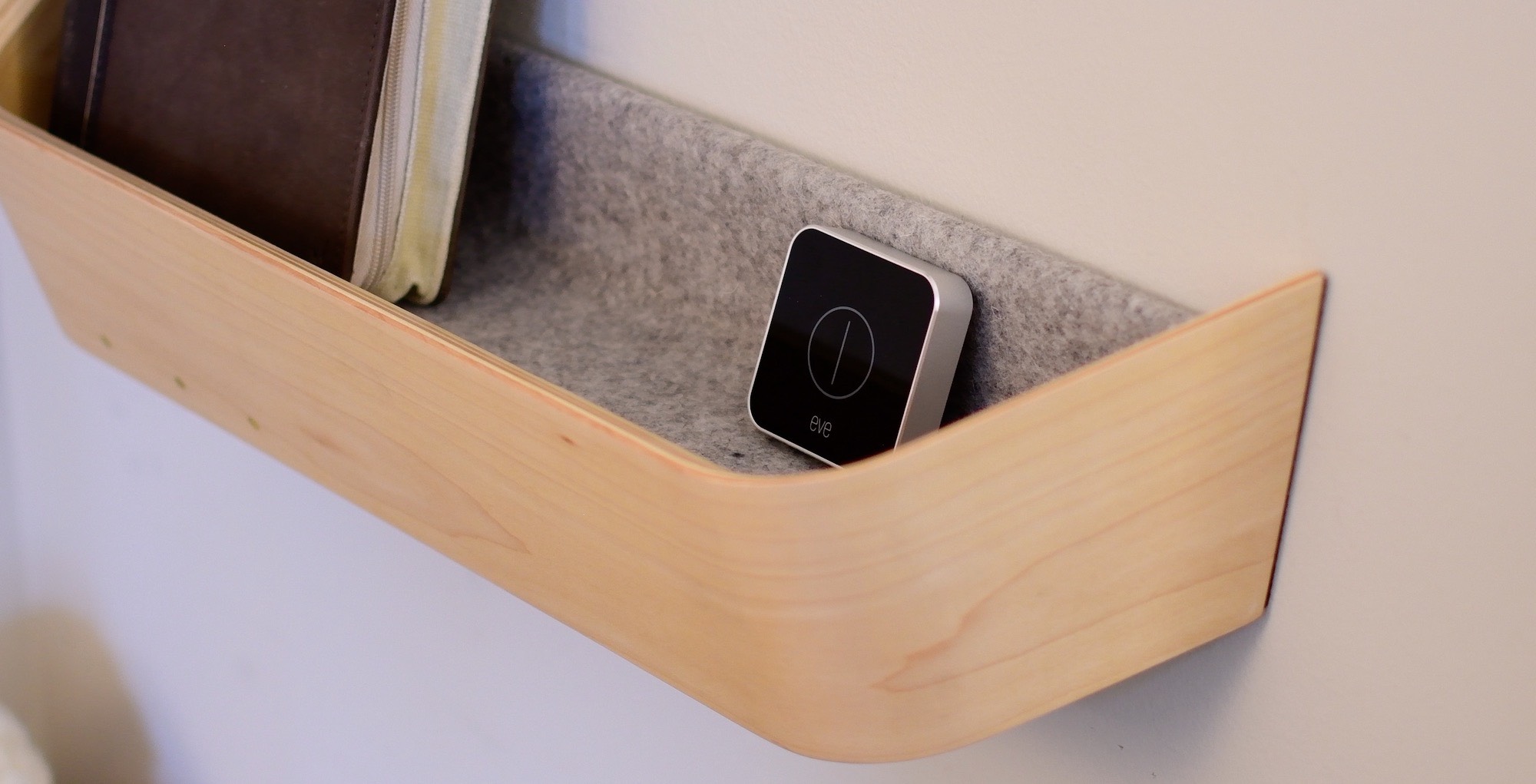 The biggest downside (for others) is that the Eve Button only works with HomeKit. In other words, those who are using some other smart home system are better off looking elsewhere.

For those outfitted with a HomeKit home, you can pick up the Elgato Eve Button right now from Amazon for $49.95.

Let me know what you think of this little gadget down below in the comments. Also, be sure to check out all of our other HomeKit accessory reporting and reviews.