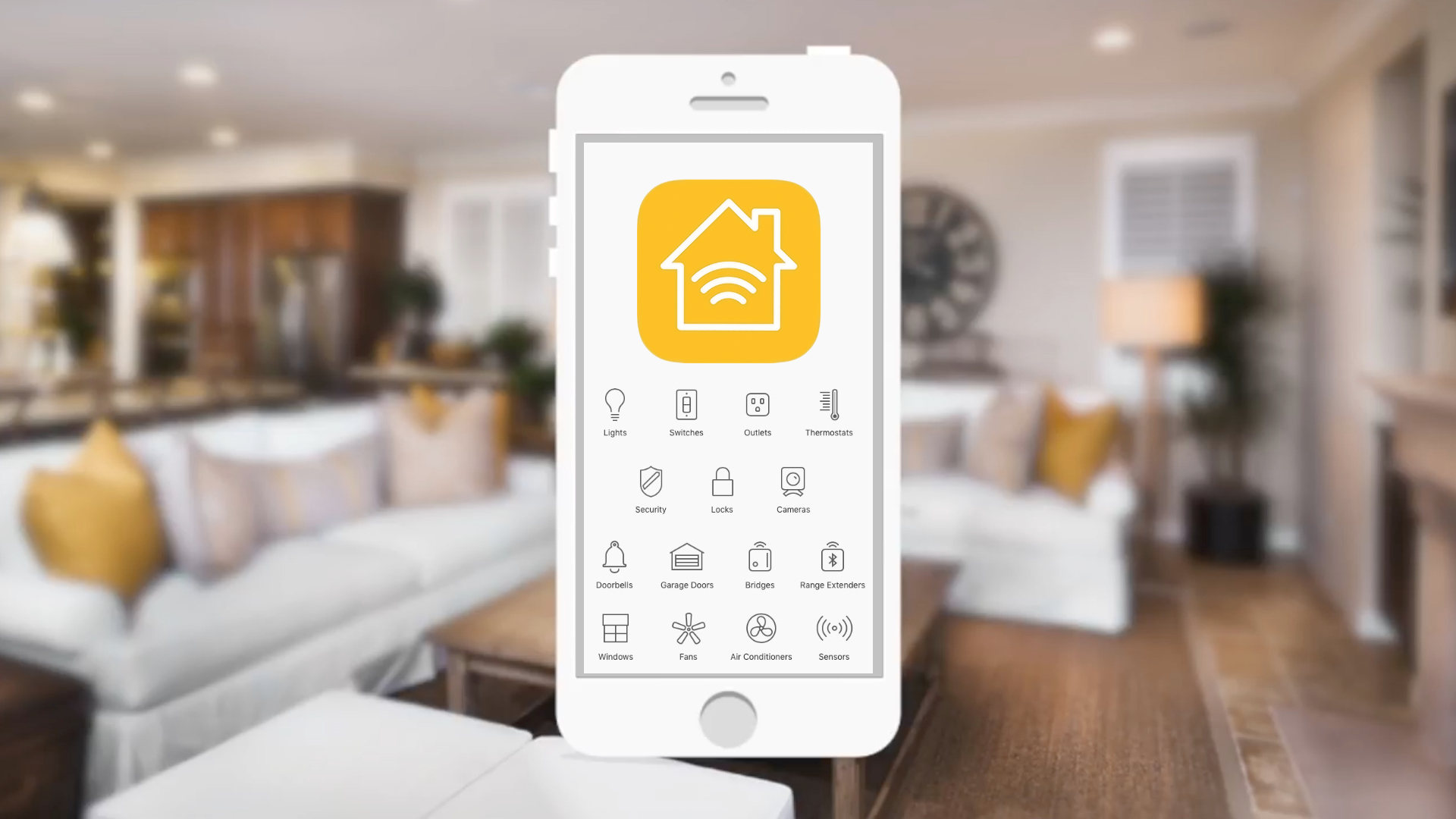 Smart home tech is one of the most exciting areas of consumer electronics, as the market continues to grow each year. HomeKit in particular has had a particularly strong 2017 with a record number of new products released.

I feel it is a good time to gather up the best, and most affordable HomeKit tech whether it is for your own home, or as a gift. Everything we’ve included, barring maybe one exception, comes in under $50.

I did manage to put everything into an easy-to-watch video if that is more your style.

For some semblance of organization, I split the guide up into each manufacturer. At the end, we will have an easy table with all of the included accessories and links. 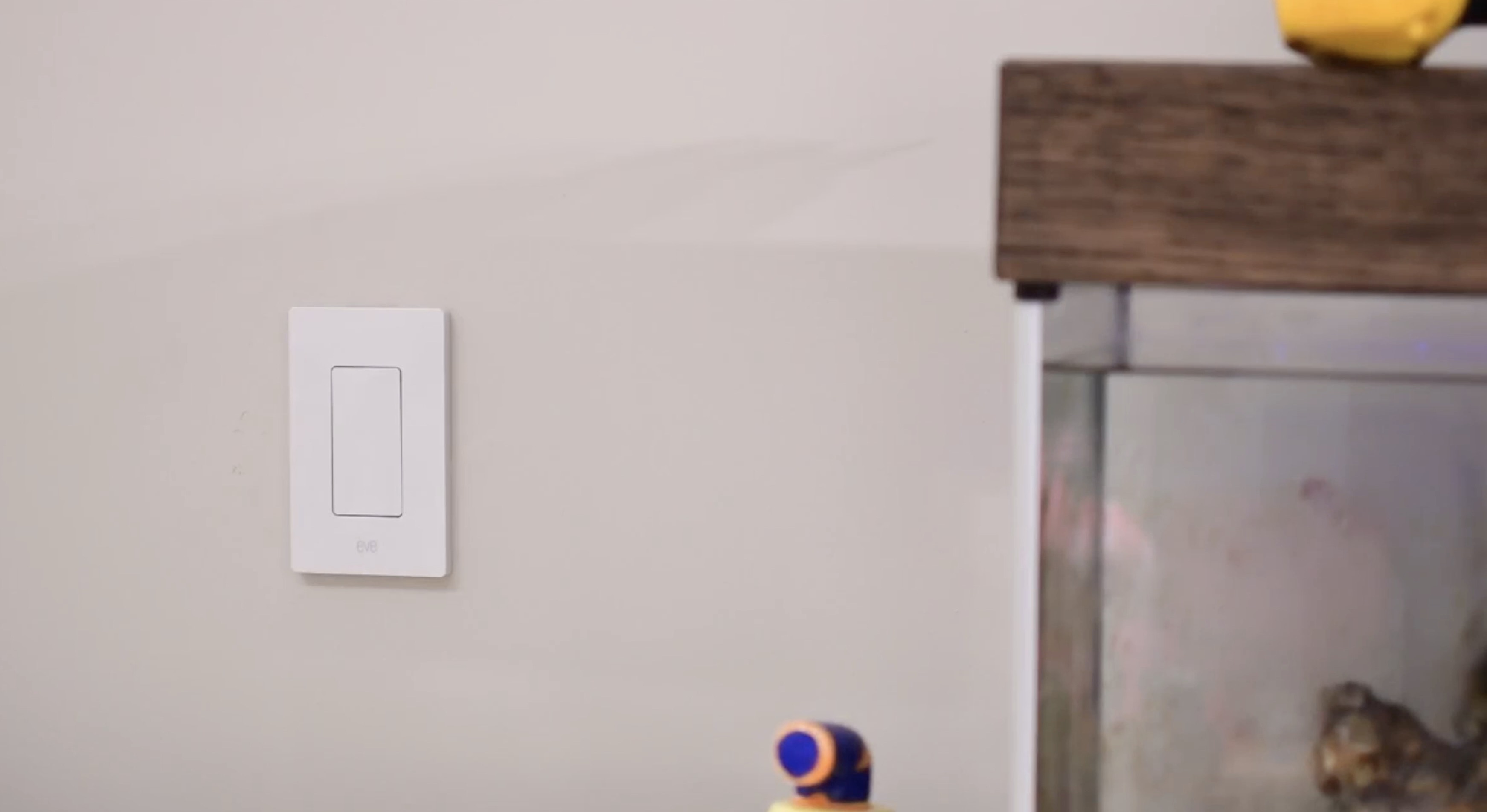 Elgato has a wide range of accessories and continues to innovate with new accessories released nearly every year. Quite a few of their products fall within our budget HomeKit price and can easily give a good start to your smart home.

Contact sensors like the Eve Door and Window sensor are a great way to automate lights, especially on exterior doors. You never have to worry if they have been left open, you get get notified when someone uses them, and you can turn the outdoor lights on whenever you exit at night.

Personally, I use it on our rear sliding door and anytime I have to take the dog out in the evening, the patio lights will turn on for me.

The Eve Motion sensor is a bit on the large side, but that is really the only knock against the otherwise solid contender. Motion sensors are extremely useful for turning lights on and off based on whenever people are in a room. 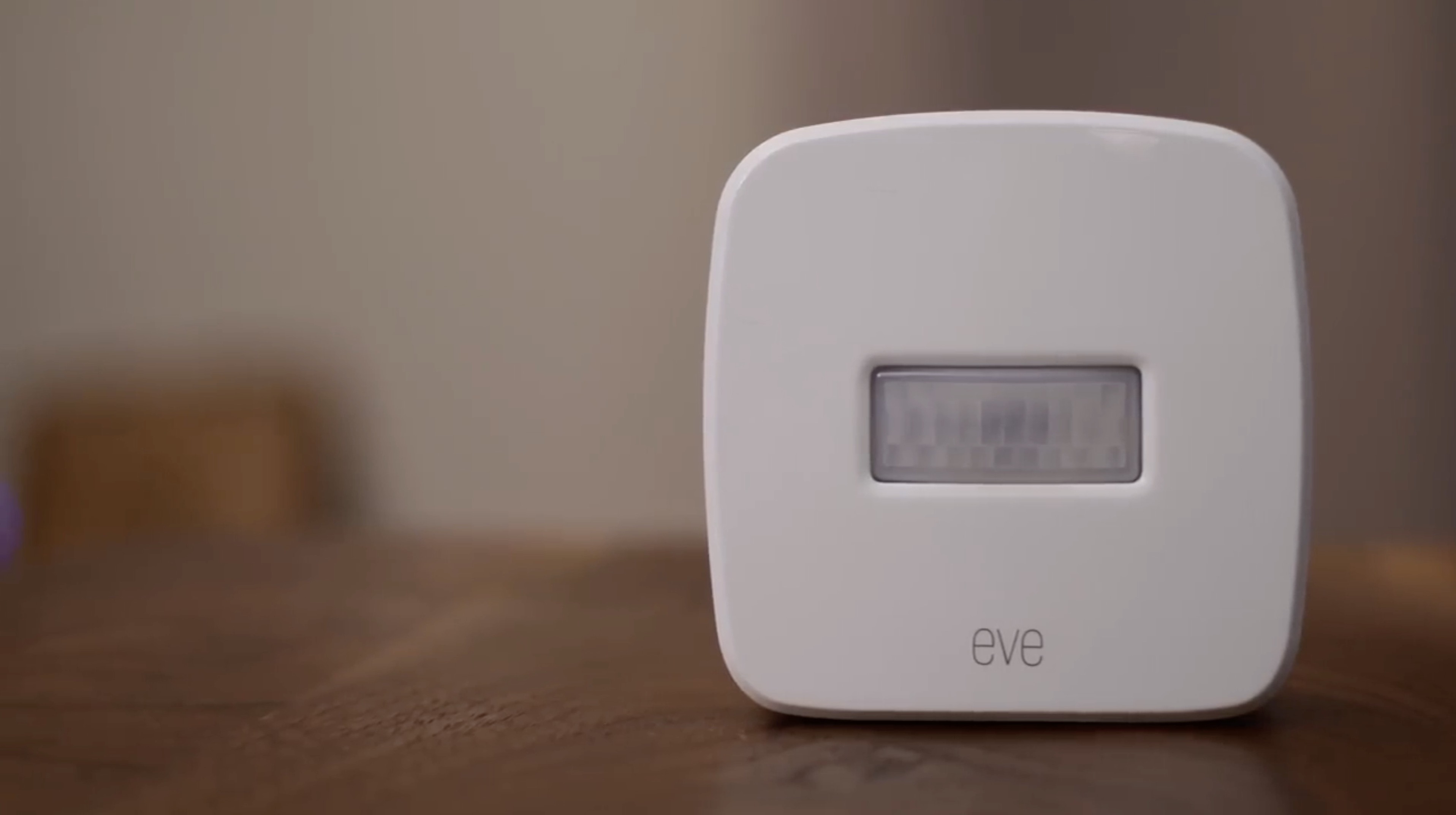 While I use them in many rooms of the house, it has been particularly handy in the bathroom. I never have to touch the wall switch, and it turns on the lights at different brightness levels depending on what time it is.

If you have a ceiling full of lights, wall switches are a great tool. Instead of putting in a bunch of bulbs, you can swap out a single light switch. The Eve light switch is clean and minimalistic looking. It doesn’t have all the bells and whistles of the more expensive iDevices one, but at under $50 it will do just fine.

The Eve Energy was the very first HomeKit product I had in my home. It isn’t the smallest smart plug, but it matches the aesthetic of all the other Eve devices, and even gives you energy reporting on whatever you have plugged in. I found it super interesting in the winter to see how much my space heater was costing me!

iHome is usually known for their audio products, but they’ve put out a couple HomeKit accessories too. 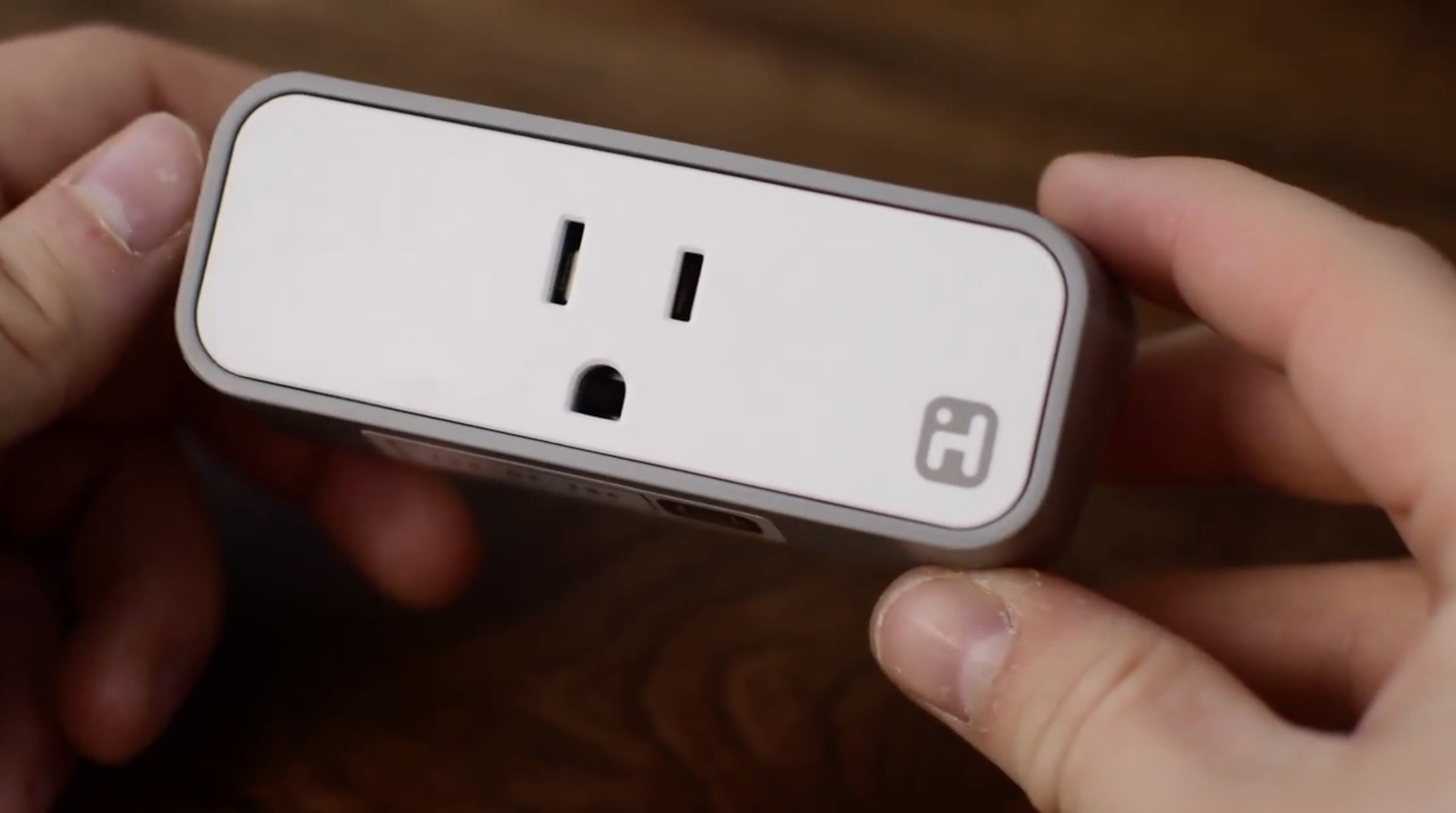 The SmartPlug is a no-frills HomeKit plug.

It has a slim design (vertically at least) that makes it easy to plug in two of these into one outlet compared to those from Koogeek, which run a bit on the tall side.

These are the best way to control your holiday lights. Simply connect one (or a few) of these to your outdoor lighting display, and now you can control them straight from your phone. Schedule and automate them with the sunset, or use Siri to control any of your outdoor lights. 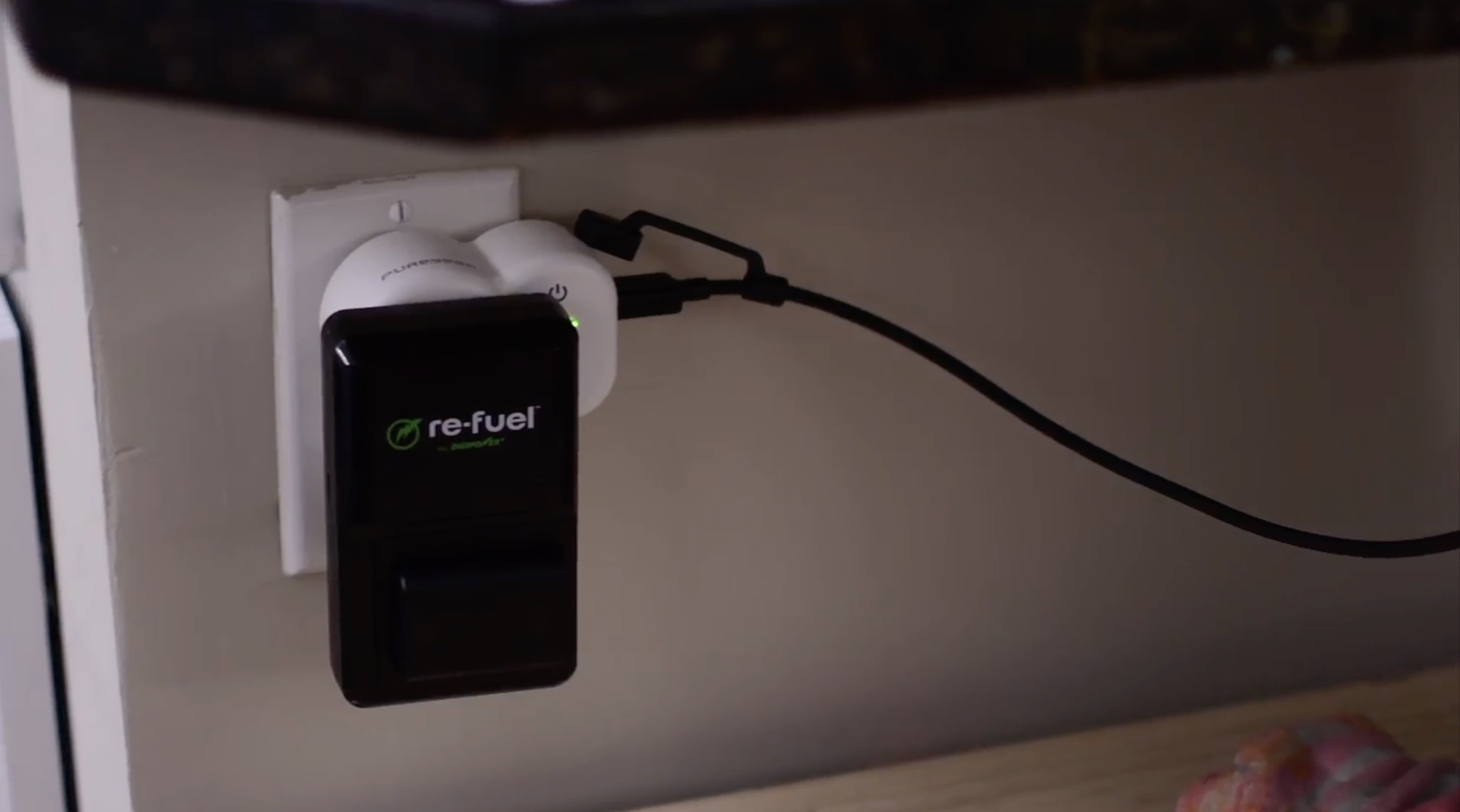 What I love about the PureSwitch, is not only is it a capable, Wi-Fi connected HomeKit smart plug, but it also has a built-in USB port.

That way you can use the socket for a light, fan, humidifier, etc and still have a powered USB port for your phone. When you turn the socket off, the USB port still gets power.

Koogeek is basically the king of affordable HomeKit gear. They have a huge list of accessories, nearly every one they make, under our $50 budget. I did include one extra item that ran just a tad more because it is super unique, and we have nothing else like it on our list. 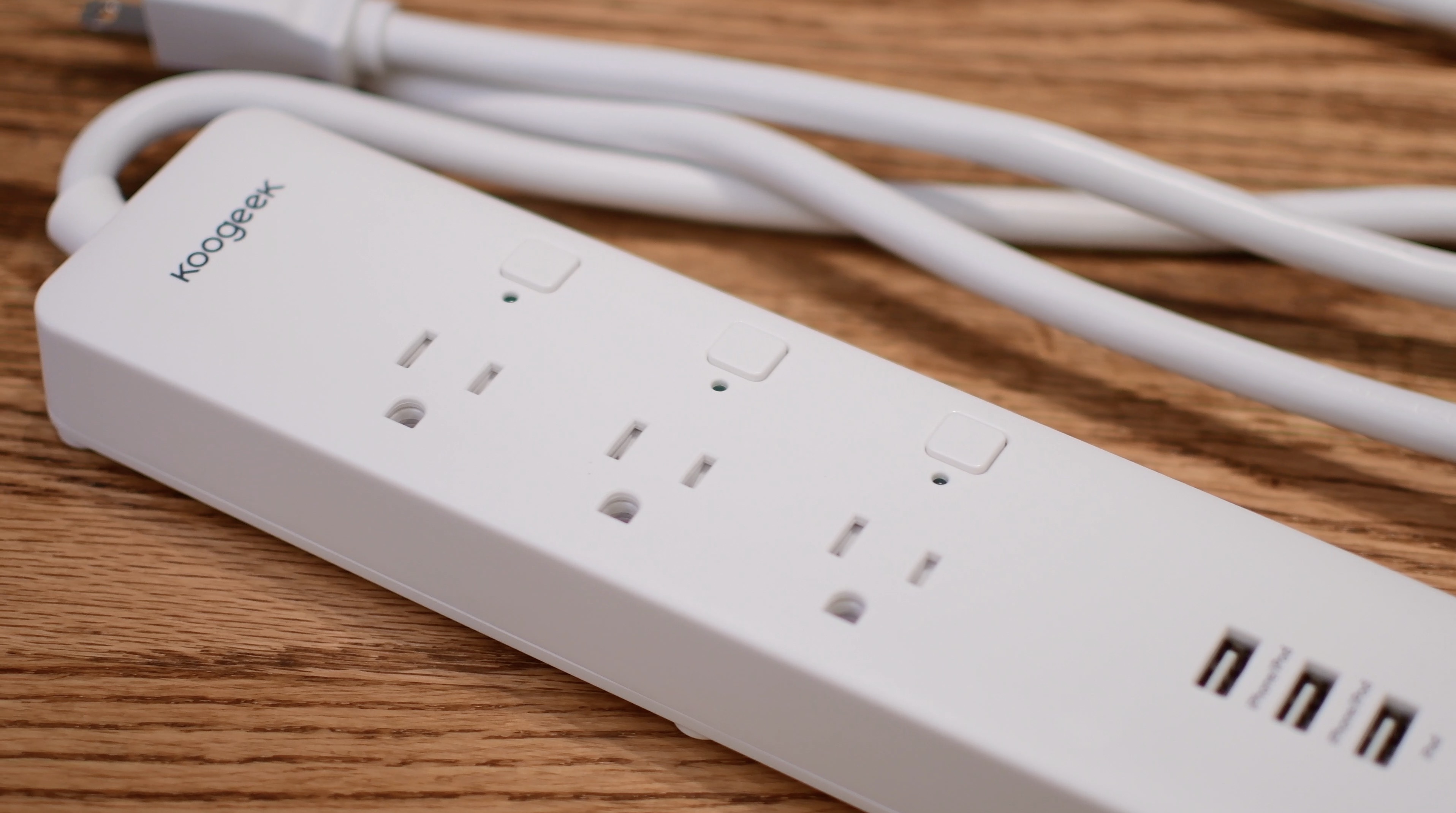 That slightly more pricey item would be this surge protector. It has three outlets, all of which are able to be controlled independently via HomeKit.

On the bottom are three bonus USB ports for charging your other gear. This hits the trifecta of features. Bonus USB ports, three independent smart plugs in one, plus surge protection.

The P1 is their original smart plug, with a slightly bulbous design. The biggest downside here was that it prevented you from plugging two of these in at the same time because it is simply too big. 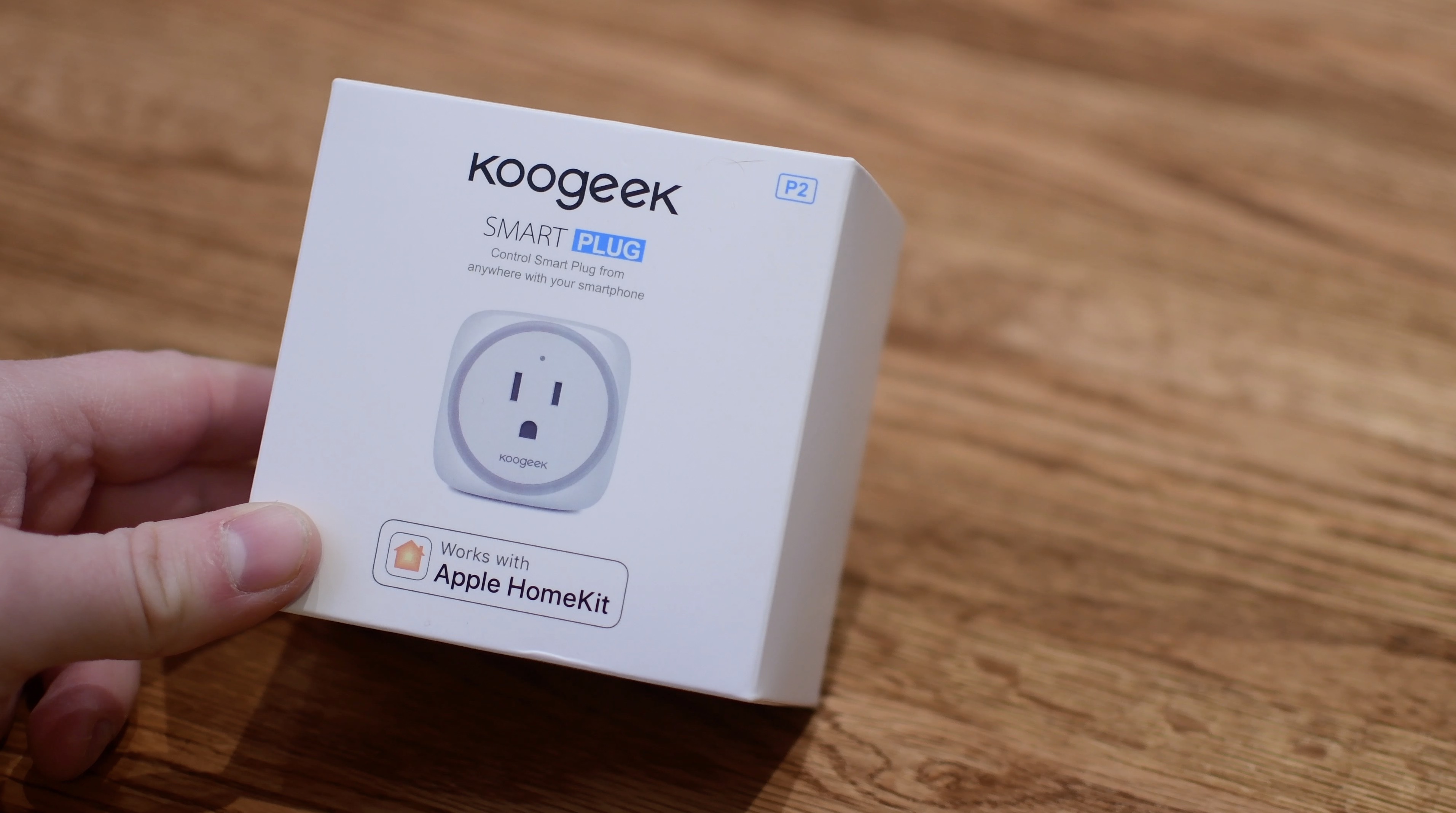 The P2 is a slightly streamlined version of the original. Still a great HomeKit smart plug, just more compact.

A dimmer switch obviously differs from the other wall switches on our list by affording you the ability to not only turn lights on and off, but dim them from the wall switch as well.

This smart bulb isn’t my favorite on the list. It is on the large side, and puts out less effective lumens than some of the other options.

That said, it work just fine and is an easy addition to your home since it requires no hub.

LIFX recently added HomeKit support to their bulbs, and two of them fall within budget. More, if you count the color vs non-color options.

This is their standard bulb. It has the highest amount of light output of any on our list.

It can change to nearly any color, as well as temperature of white. I find the colors to be a bit oversaturated, though since you can just choose a less saturated color, it isn’t a big deal. It is on the large side though, so you may have issues getting it into tight fixtures. 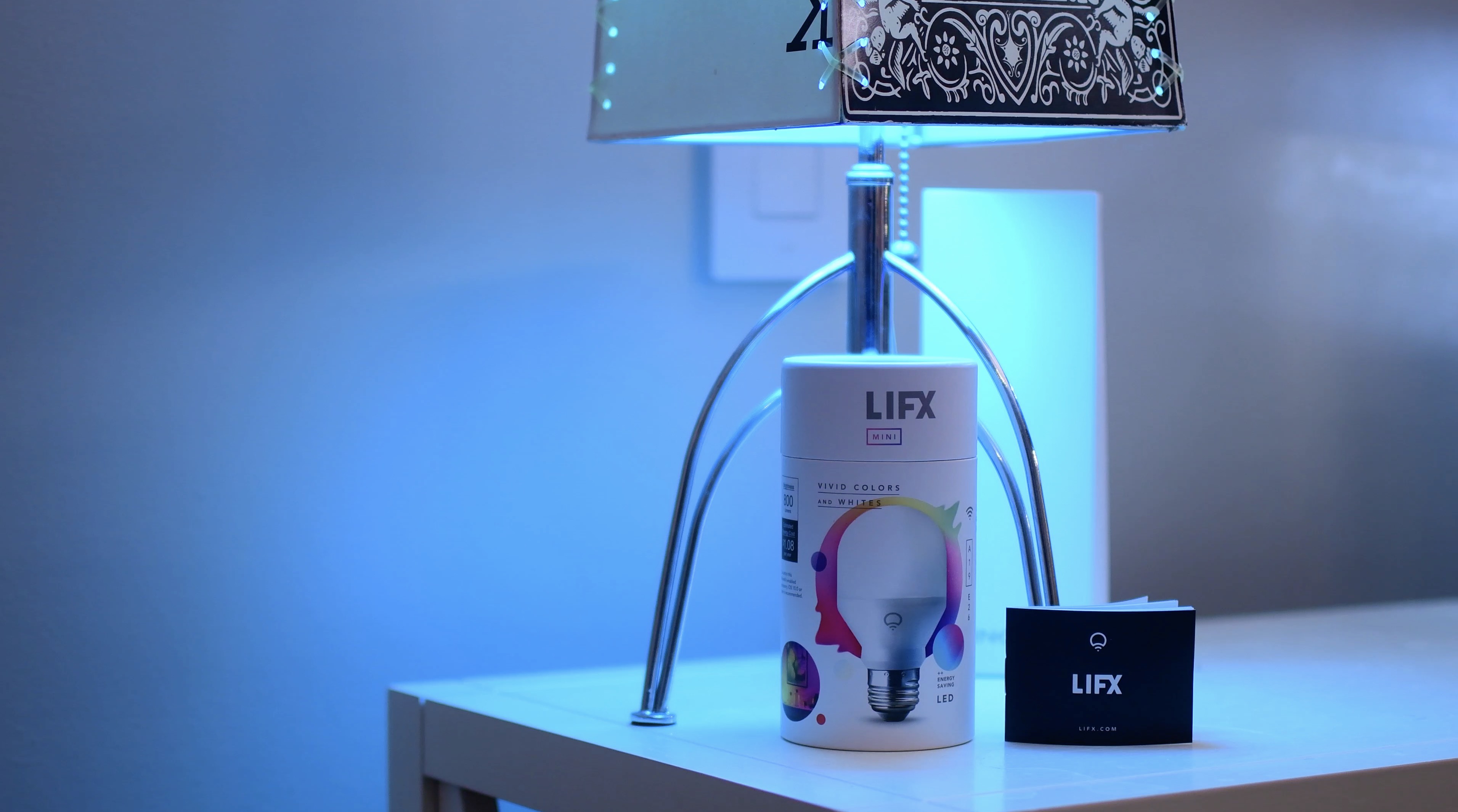 If you are looking for something a little on the cheaper side, or maybe just smaller, the LIFX Mini is perfect. It still has the amazing amount of colors, and the same set of bonus effects in the LIFX app. It puts out slightly less lumens, coming in more comparatively to the Hue lights. 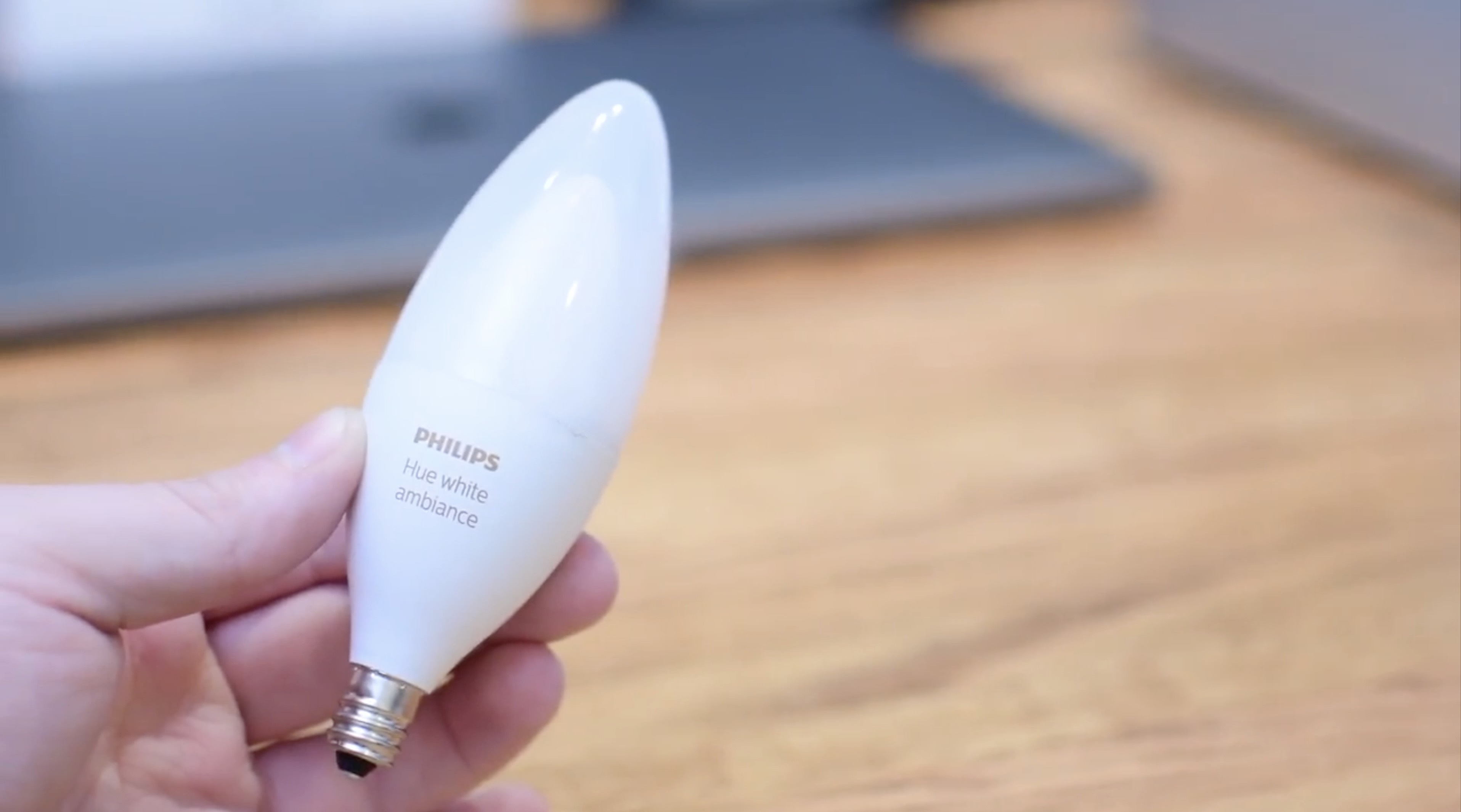 Speaking of which, I’ve been a fan of the Hue lights since they launched many years ago. I’ve had them since then and they continuously launch new features and products in their ecosystem. HomeKit support was first added in the form of a new bridge. Later, HomeKit support also came to all of the add-on accessories as well.

To use any of the Hue products, you need to have the bridge. This hub connects your bulbs and accessories from their Zigbee network, to your local network.

Luckily, you can pick up a starter set consisting of two white ambiance bulbs, and the bridge for less than $50.

When it comes to additional bulbs, you can add any number of different options. The cheapest would be the white ambiance that allow you to choose from several different shades of white, from warm to cool.

The full color bulb is also an option. This is their most full-featured bulb and has been updated several times with better color representation and more brightness. 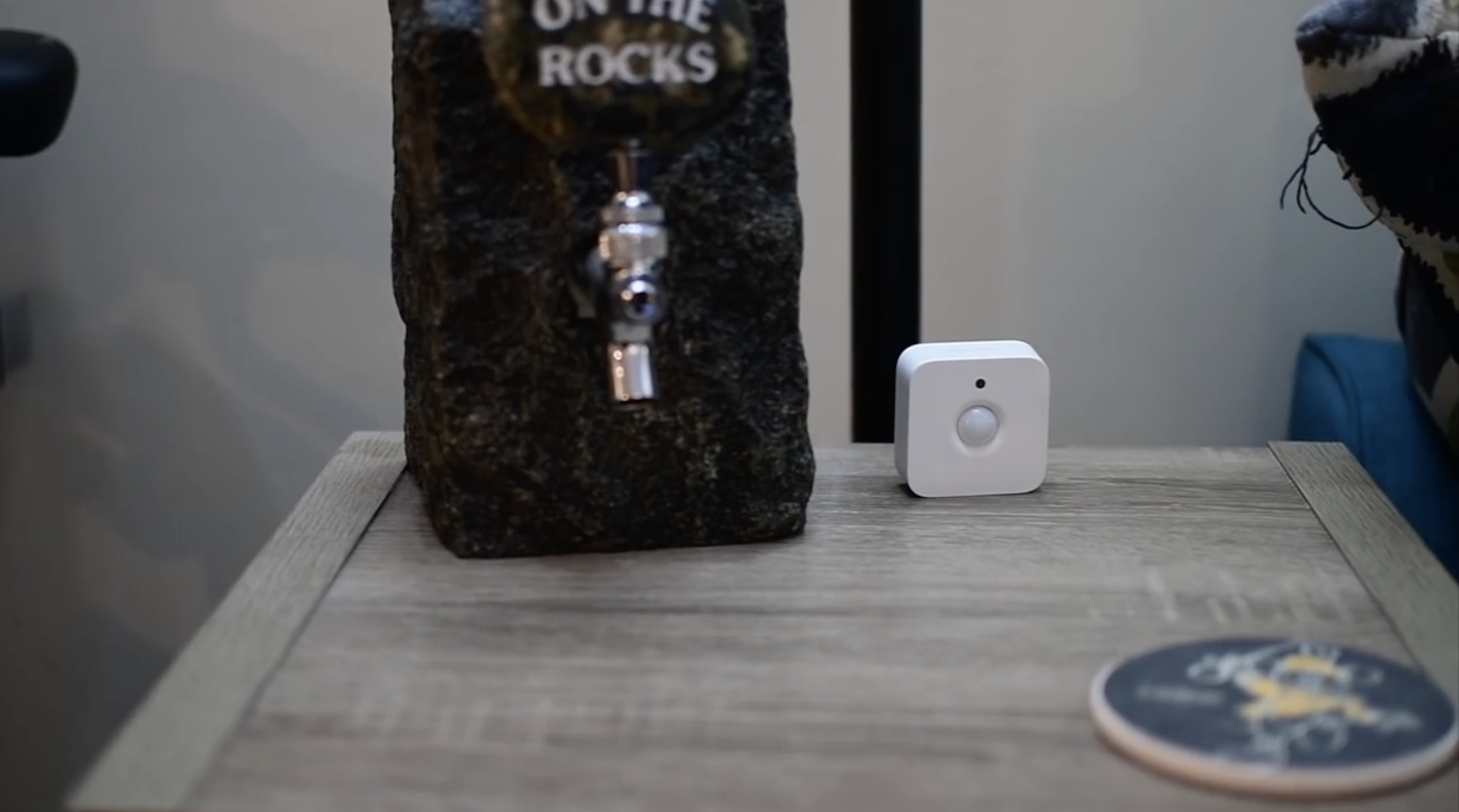 The Hue motion sensor is super handy. Previously, it was only useful for the Hue lights, now you can use it to trigger any HomeKit scene. You can have outlets, switches, fans, etc all turn on when you enter the room.

The dimmer switch is normally used with the Hue lights to turn them on/off, as well as dim them. You don’t have to use it for that at all if you elect to use it with HomeKit. Like the Tap, you can set a different command, or scene to each of the four buttons. 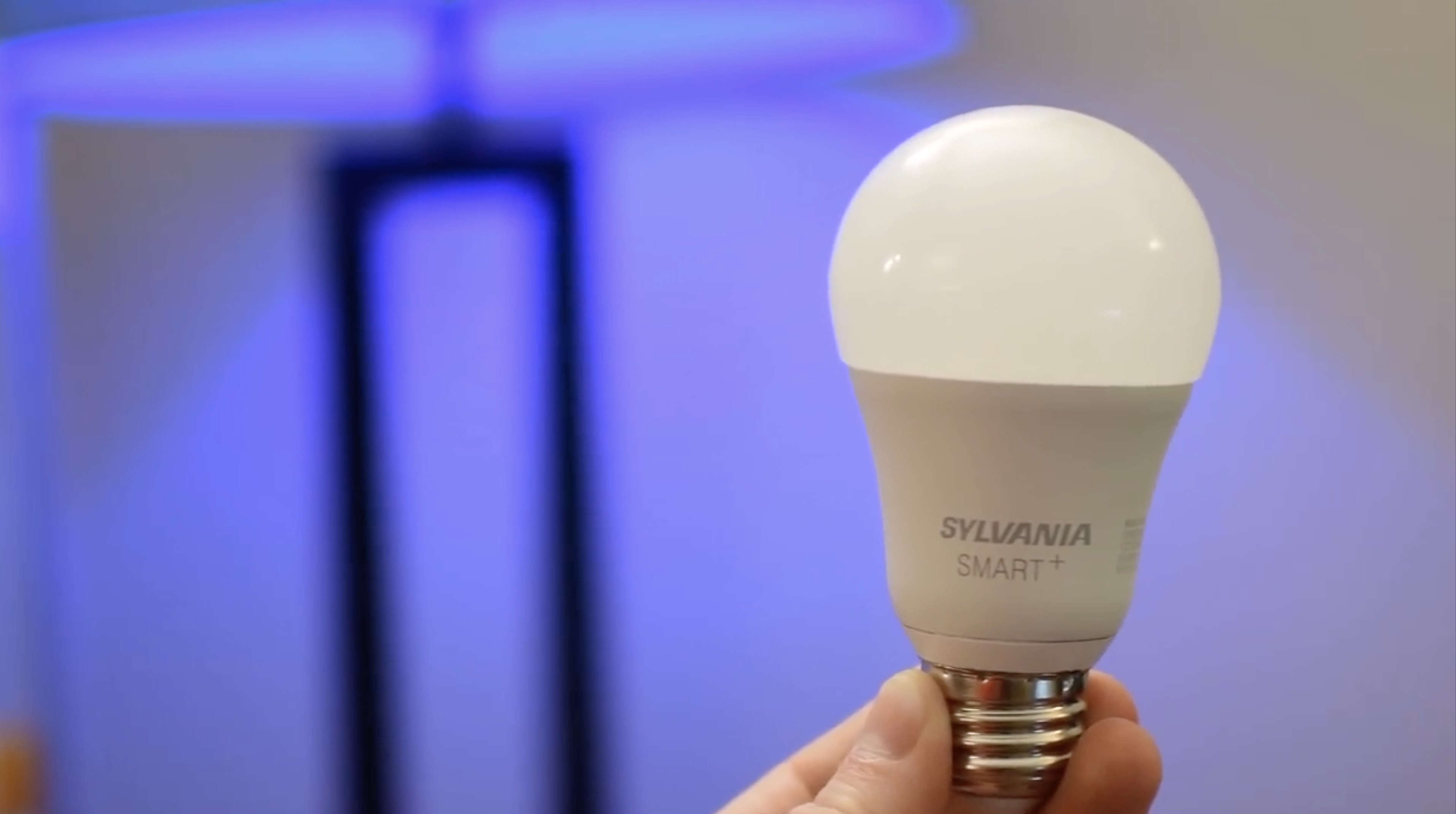 These easy to use bulbs require no hub and connect to your devices or HomeHub over Bluetooth. The full color option is nice, though you have the usual white option if you prefer. Considering how close the prices are, you might as well get the colored version.

There is a lot to love about HomeKit gear. Though when it first launched, it was quite price prohibitive.

Much has changed over the last couple years, and we have more than 25 products on our list.

To summarize everything, here is a list of all the gear we’ve covered in this roundup.

Whether you are looking for switches, lights, outlets, or something else, hopefully you’ve found something to love in this affordable HomeKit roundup.

Let me know down in the comments which of these is your favorite, or if you have another budget accessory for everyone to check out.