The iDevices HomeKit Wall Switch fixes one of the crucial issue with many smart homes. Not only does it fix a glaring issue, it comes with enough bells and whistles to make it the best HomeKit wall switch on the market.

HomeKit makes it effortless to control your home. From lights, locks, fans, speakers, and much more. All HomeKit devices play well with one another, so no matter the product you get, you know it will be compatible with your smart home.

The problem with a HomeKit home

The most popular thing for smart home adopters is lights. They are something basic that everyone uses. The problem is, most people use systems like Lutron or Philips Hue. They (for the most part) cannot be controlled by switches in your house. While those systems are great, it makes it more difficult for you to control your lights without using your devices or Siri. That means you must always have a device present.

Obviously, that isn’t ideal for you 100% of the time, or your guests.

Yes, those manufacturers do produce their own switches, which may or not be HomeKit capable. They are still quite expensive, limited in their functions, and can only control their products.

Even if you did opt to use something like the Hue dimmer switch, that would leave your existing wall switches useless. If you turn them off, your smart lights will no longer function. It’s for that reason I see many smart homes with tape over their wall switches. 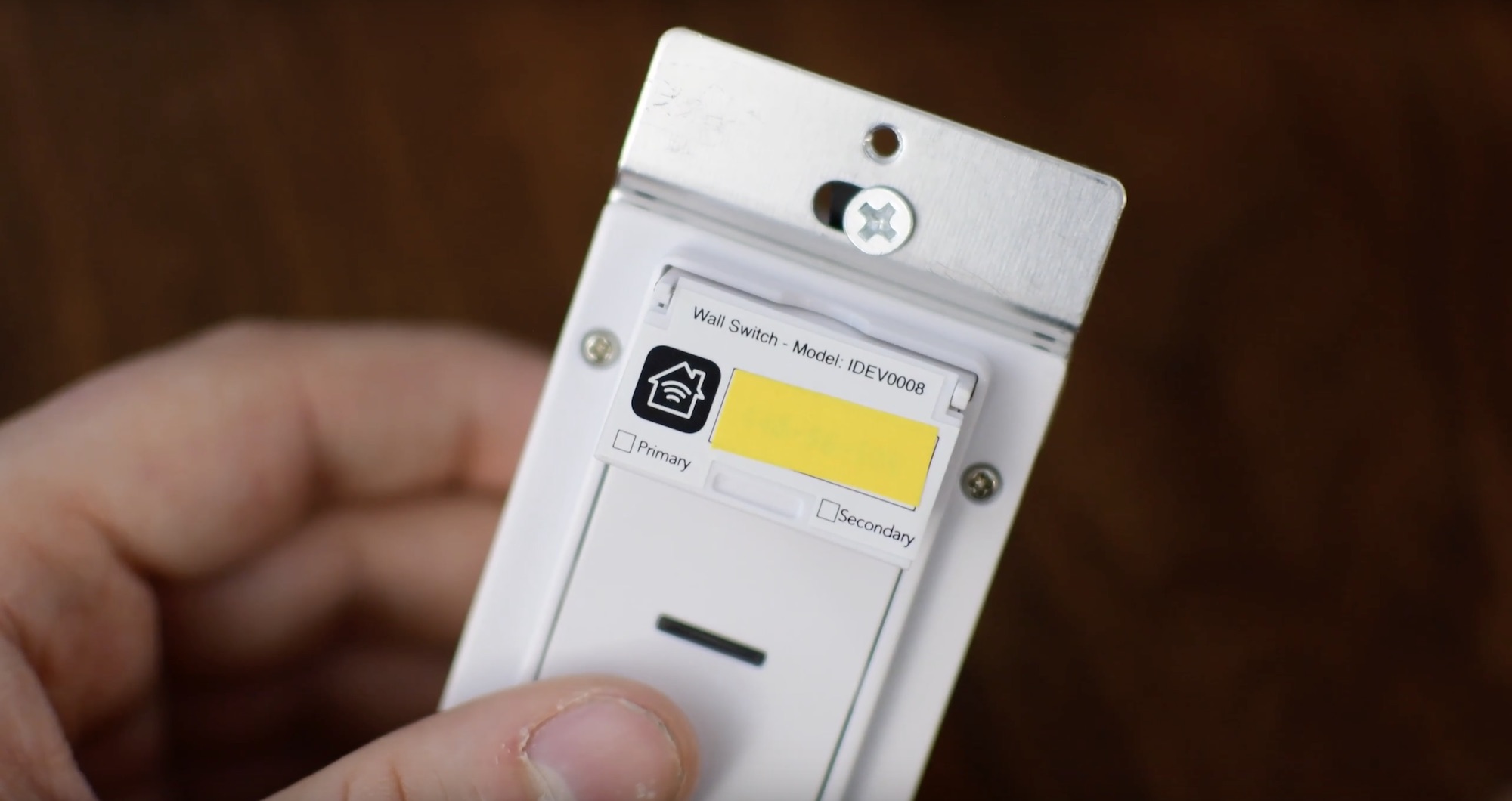 To solve this, it seems pretty straightforward. You need to effectively take your wall switches, and turn them into HomeKit devices that can control any other HomeKit gear in your house.

Clearly, that is what the iDevices wall switch aims to do.

The iDevices Wall Switch is a replacement receptacle for your existing switches. This is not like the majority of smart outlets on the market that plug in to the wall. You actually have to do some wiring, which immediately can scare people off.

The device itself is a little on the large size, making it a bit of a tight fit if you have an overly crowded electrical box. Unfortunately, that isn’t something you may be aware of until you take your existing switch out. 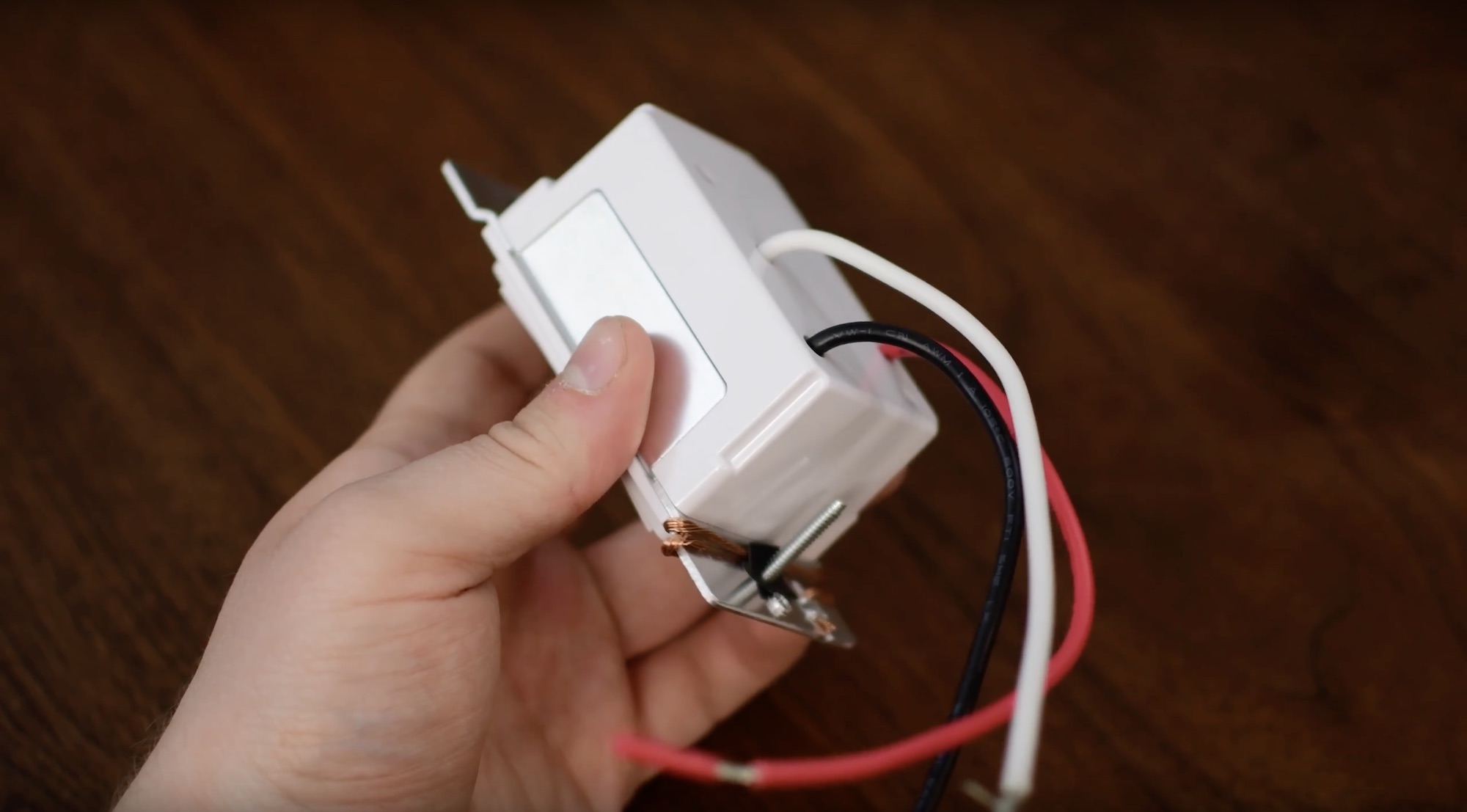 The installation of the iDevices switch is fairly easy to do. If you consider yourself fairly handy. You don’t have to do anything different than any other light switch, so it’s a pretty straightforward job that many people can tackle themselves. If you are nervous, it is never a bad idea to have a professional come out and handle it for you. Remember, always turn off the break before doing any electrical work!

Why is it better?

There are several HomeKit switches on the market. So what sets the iDevices one apart? There are many unique aspects to it. To start, the LED nightlight in the center of the switch is also HomeKit capable. That means you easily change the color and brightness to customize it. They also paid attention to design. If you have this mounted in your wall, how do you access the HomeKit code printed on the side? Easy. They have a pull out tab on the top that also has the code, so you can easily access it at any time.

It is also WiFi-connected instead of just Bluetooth. That means you don’t have to be in proximity, or have a HomeKit hub nearby to make it work. The WiFi also allows it to work with other digital assistants like Amazon Alexa.

One of the biggest selling points, is that it also works in multi-switch setups. For instance, say you have a hallway light. You have one switch on one end of the hallway, and another switch at the other. You need a three-pole switch to make that happen, and a four-pole switch if you have another switch involved. Many other HomeKit switches will not work in that situation, but the iDevices one does. That is a big deal for those in larger homes. 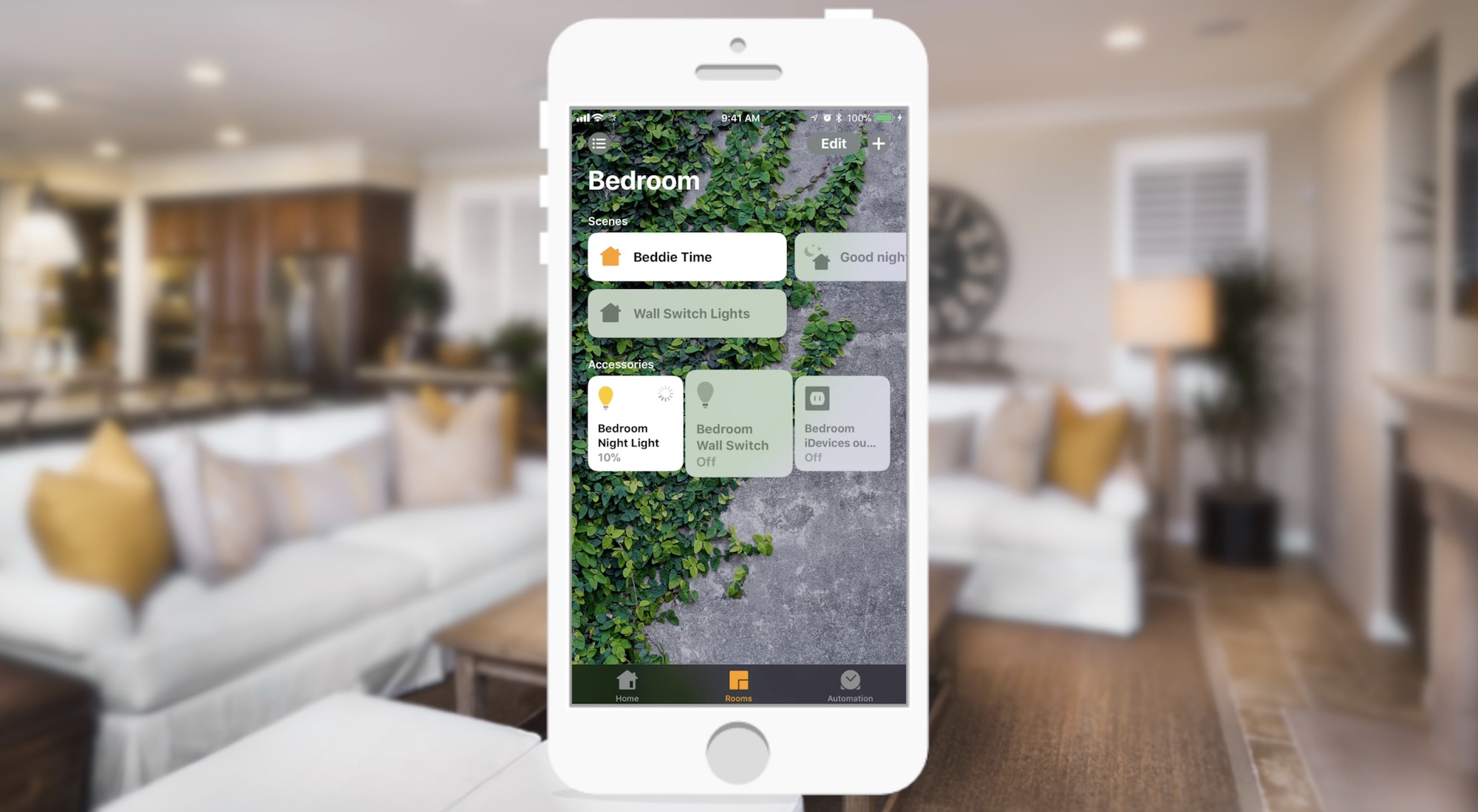 The automation aspect is really where HomeKit shines. There are a few common scenarios that work well with a HomeKit switch. Here are a couple that I personally utilized these switches for.

In the hallway, we have a switch downstairs, and upstairs. The lights are odd bulbs that I can’t replace with Hue. Most other HomeKit switches won’t work because it is a three-pole setup. What I did was replace a switch with the HomeKit one. Now I can control them from my phone, and schedule them. What was more useful though, was the addition of a motion sensor. We covered the Eve motion sensor in the past, and it worked well for this.

Now, when we come down the stairs, at night, the hallway lights come on. It’s fantastic because I can signify only certain hours, and turn non-HomeKit lights into schedulable, automated, smart lights.

In my living room, we’ve got lots going on. Again, lights plugged into HomeKit outlets, like the one from iDevices, as well as track lights up above. I also have an exterior door, right into the living room we use frequently.

In this situation, I used the geofencing feature of HomeKit to automatically turn the lights on when I arrive, and turn off when the last person leaves. Similar to the bedroom, it also allows me to tie them all together, regardless of how they are connected, and even put them on a motion sensor. 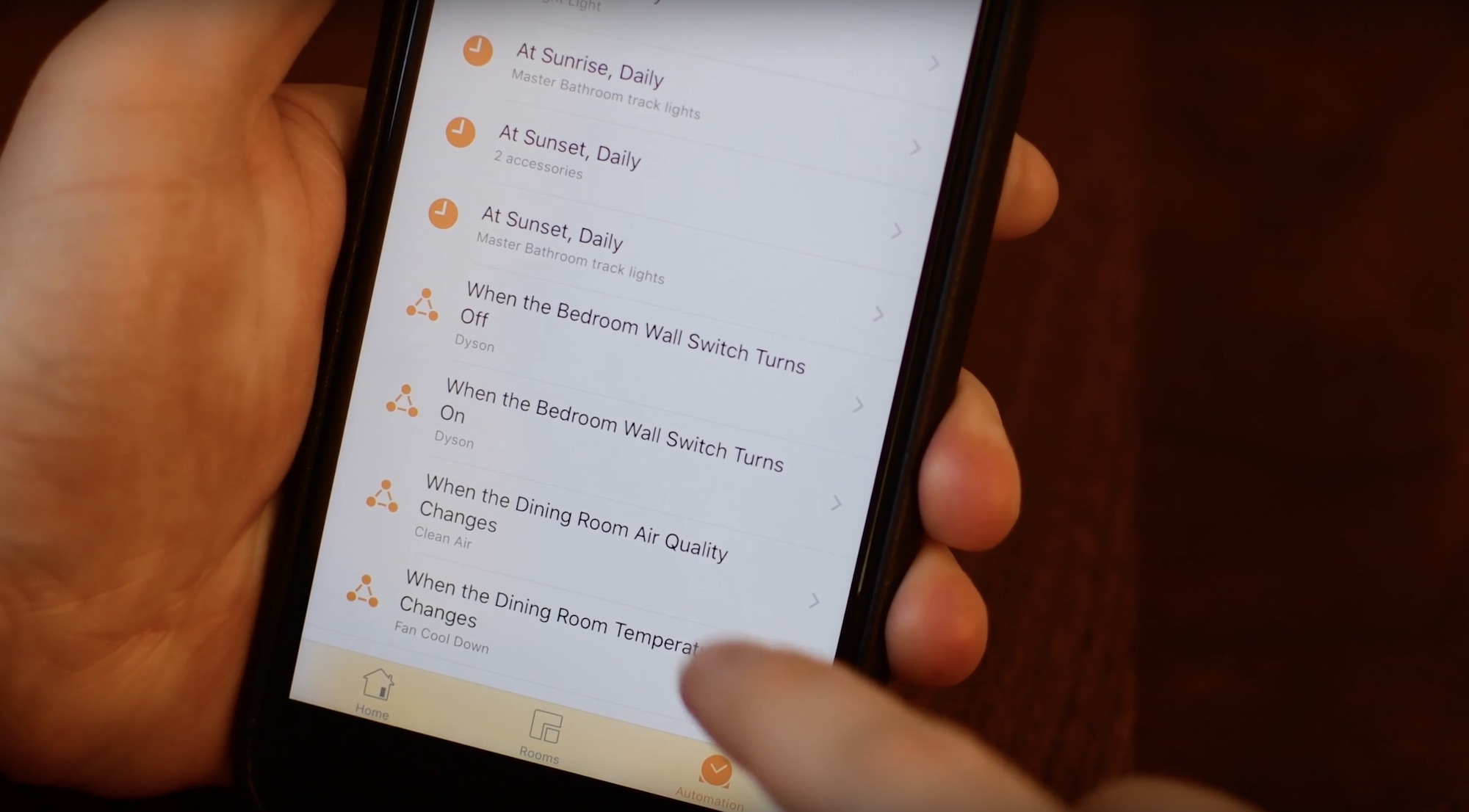 In the bedroom, we have a ceiling mounted light. The switch controls that ceiling light, as well as one of the outlets. The issues we had was that the Hue lights would not reach here reliably from where our hub was located downstairs. We also had more than one light to plug into the wall that wasn’t controlled by the switch. Lastly, we weren’t able to turn them on and off from bed. Just the one on the bedside table, but that was actually controlled by the wall switch. So if we turned it off by hand, the switch would no longer control it, or if the switch was off, it wouldn’t turn on at all.

To handle this, I installed the iDevices wall switch, and set up a few simple rules. First, when the switch is turned on, also turn on the HomeKit outlet with our extra lamp. When it turns off, do it in reverse. Now with one button press, everything is synced up together. Or I can use Siri from bed, and control just the switch, just the outlet, etc.

A fun other trick too, was to have my lights automatically come on in the mornings to help me get up for work.

iOS 11 additionally improves things, because there are timers. So when I turn the light on from the switch, it automatically turns off in thirty minutes. 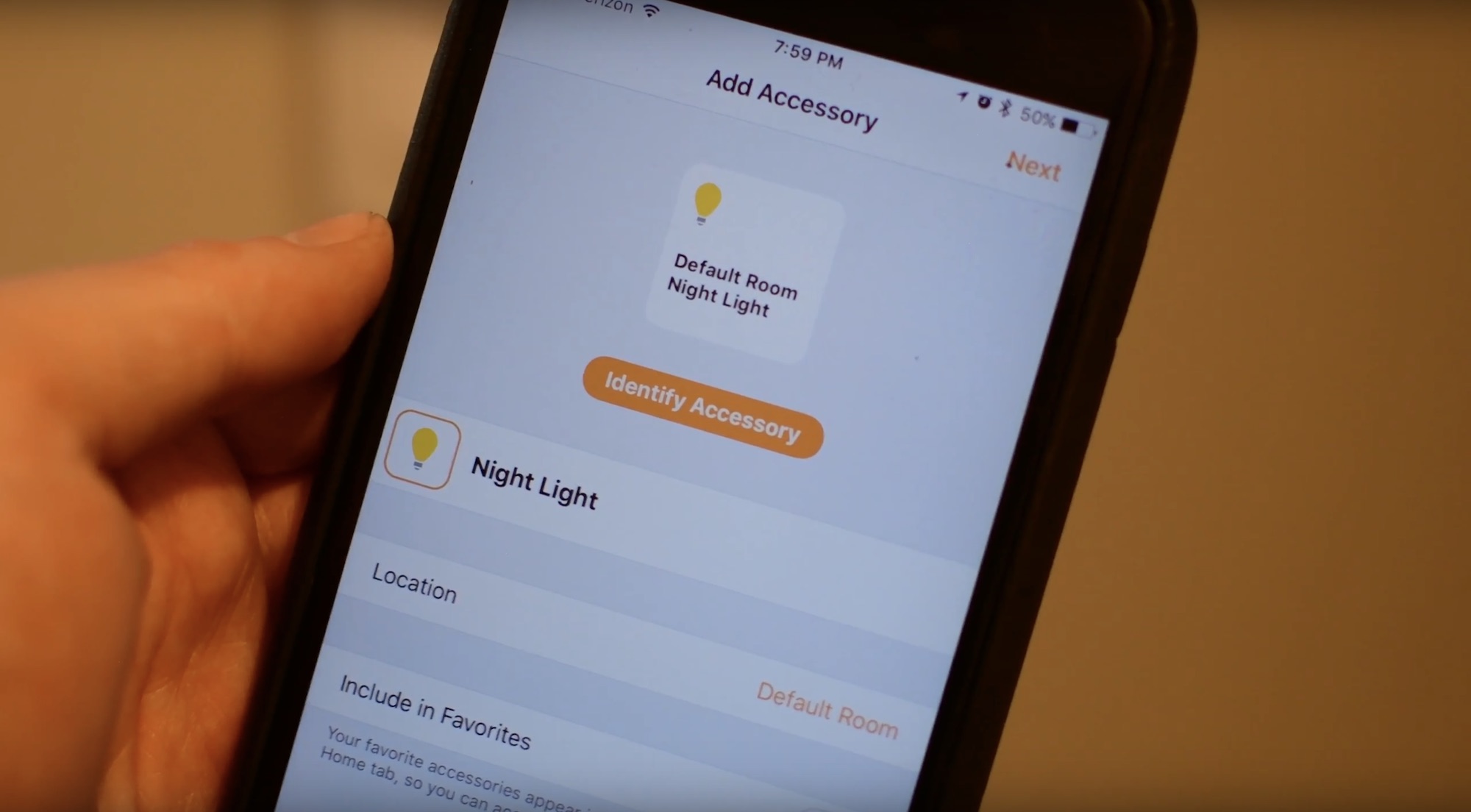 Though many smart switches have integrated a nightlight, the iDevices wall switch is the only one with a smart nightlight. The miniature LED positioned in the center of the switch can not only change color, but can be completely scheduled and automated. It actually shows up in HomeKit apps as a separate device. This has several practical uses.

In the bedroom, use it as bedtime alarm for your kids. Red light means they must stay in bed, and green means they are allowed to get out. You can schedule it to go along with their bedtimes, and even have separate schedules for weekends.

For me, I use it to determine how late I’m running for work in the morning. It is easier for me to see a color rather than grabbing my phone and turning it on to see how much time I have left before I need to get up. With the nightlight, I have it change from green, t0 yellow, to orange, and then to red on workdays based on the time. With red meaning “Get out of bed now!” 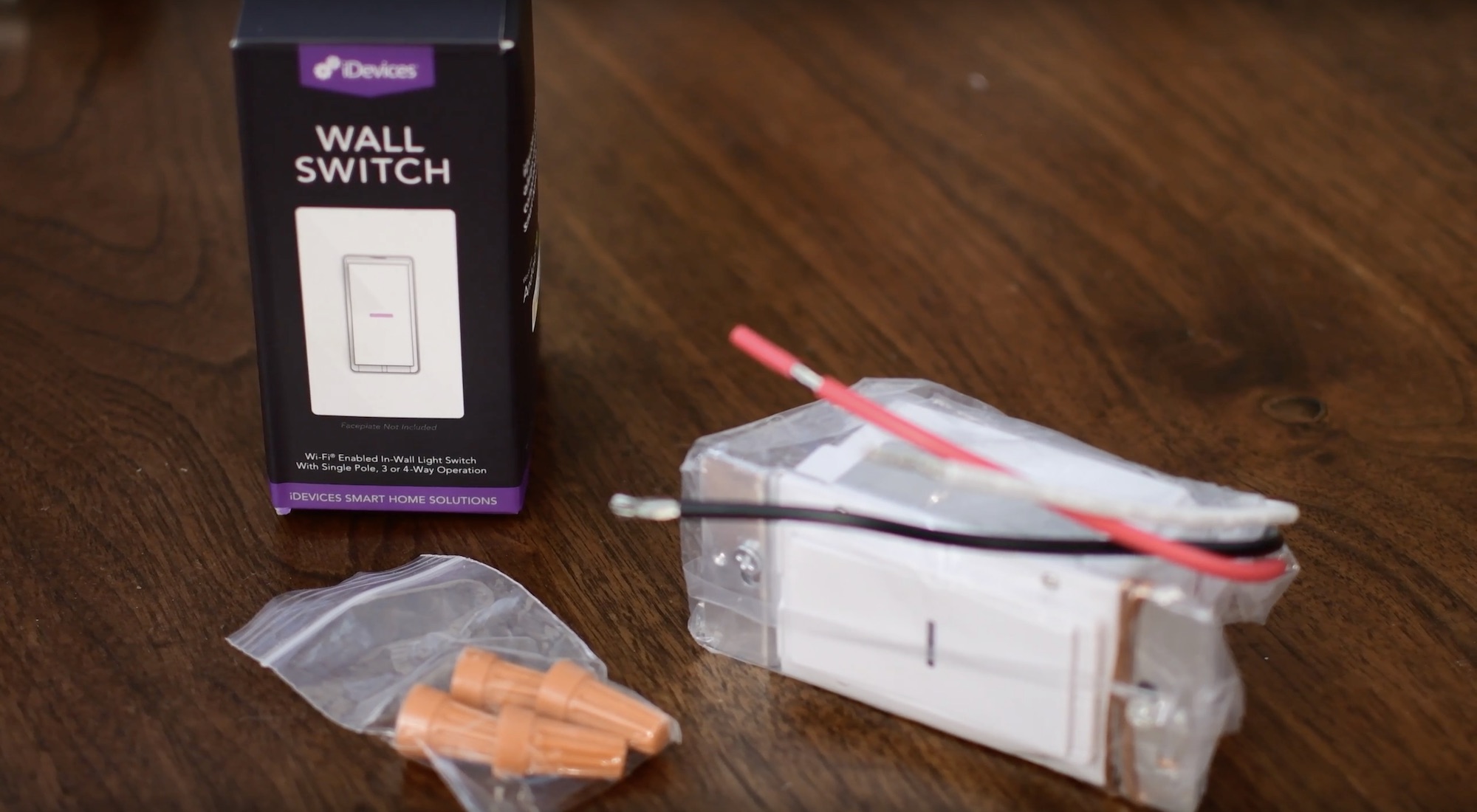 I feel like light switches aren’t the most exciting thing. If you are to have a HomeKit home, they can not only be affordable, but necessary. Many rooms have several lights that are more expensive to replace than a single switch, and other lights can’t be replaced at all.

If you don’t use Alexa, Google Home, the nightlight, or three or four-pole setups, you most likely don’t need to splurge on the iDevices wall switch, and may be better suited for the Eve. However if any of those apply to you, then the iDevices offering is the best choice you can make.

You can buy the iDevices Wall Switch for $99.