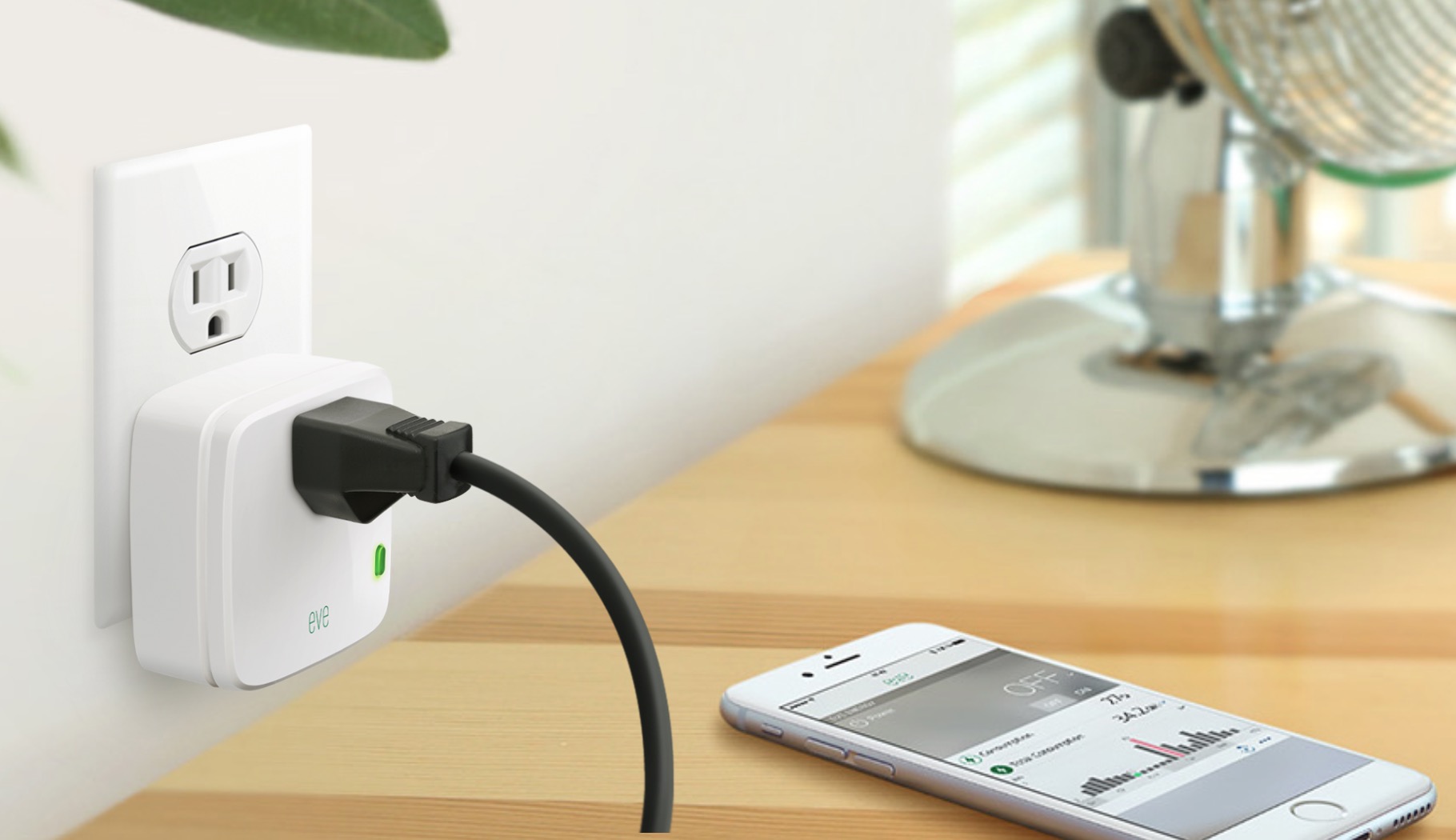 Apple’s HomeKit has had a bit of a rocky start. The home automation platform that was meant to tie all of your smart home devices together was plagued by delays from Apple, as well as manufacturers. Devices started to hit the market in the middle of last year, and this year at CES, we saw many new options that are slowly starting to trickle out. Today, we are going to take a look at one of those devices, Eve Energy from Elgato. It is a simple solutions for those who want to start or grow their smart home, without breaking the bank.

The Eve Energy is a simple adapter that plugs into an outlet. It allows you to control whatever device that is plugged into the Eve Energy from the accompanying Eve app, or even better, from Siri. That means you can connect something like a light, fan, heater, coffee maker, etc into the Eve Energy, and turn it on or off from within the app, or using Siri with your voice. For those out there that love data, it also allows you to see how much energy is being consumed by the device, and run reports over different periods of time. The real strength though, are all the features enabled through HomeKit.

HomeKit affords you the ability to connect and automate all of your HomeKit devices. You can assign the Eve Energy to a specific room in the house, assign it a shorthand name that is more natural when communicating with Siri, create triggers based on sensors or locations, and set up a schedule.

Setting up the Eve Energy is dead simple, and similar to any other HomeKit product. You download the free Eve app from the App Store, add a new accessory under settings, then scan the HomeKit code that is printed on the side of the device, and the included paperwork. It will pair, and now Eve Energy is available to use in the Eve app, any other HomeKit application, or Siri.

What sets the Eve Energy apart a little bit is that it is actually being connected through Bluetooth Low Energy (or BLE). Most other HomeKit devices are connecting via Wi-Fi. Since this is connecting over BLE, you have to be within a certain range to control it. However, if you have an Apple TV (3rd generation or newer), you can access the device from anywhere. HomeKit will sync the device information through your iCloud account, and any Apple TV with that iCloud device will seamlessly in the background, connect, allowing you to control the Eve Energy anywhere in your home, or outside your home. What is particularly nice about the Apple TV as a hub is that there is no configuration or work on your part at all. It simply works.

To give you an idea of what you can do with Eve Energy, here are a some different situations. You could have a lamp plugged in that turns on and off automatically whenever you arrive or leave. You could have a coffee pot plugged in that is scheduled to start brewing at 6:30 before work. You can remotely check if you left a space heater turned on. You can have a dehumidifier scheduled to run in the evenings when you are home in the summer, and obviously much more.

Now those are great if you just have Eve Energy, but if you invest in other HomeKit devices, you can do even more. For instance there are blinds, fans, thermostats, air quality sensors, door sensors, door locks, and more becoming available from Elgato and other manufacturers. Now you could create a scene with many other HomeKit devices and when you say “Goodnight Siri”, have your door lock, thermostat adjust, lamp (via Eve Energy) turn off, blinds close, and ceiling fan turn on low. If you have a air sensor, you could have a fan that is plugged into Eve Energy turn on when the temperature rises. A space heater automatically turn on when the temperature gets low. Or have a humidifier turn on when the humidity gets to a certain level.

When it comes to the data collection and energy consumption, I wish this was a little more robust. You can view how much power the Eve Energy is currently using, how much it used for the day, and even more in simple exportable reports. All of this is good, but other products like the HomeKit Switch from iDevices will find the estimate cost of electricity based on your location, and give you a rough idea how much that power is actually costing you. This would be a great addition. When I view how much electricity I use, I’m not certain if that is a lot or not. I think seeing how much in dollars it would be costing makes that information more valuable to me. While it can’t do this now, that is not to say that isn’t something that could be added in the future via an update to the app.

Devices like the Eve Energy often get overlooked for their simplicity. There has been a lot of noise around things like smart locks, or thermostats you can control via HomeKit but outlets and switches are going to be crucial components of any smart home. Combined with different HomeKit devices, there are unlimited options to how you can customize and control your home.

While Eve Energy isn’t the first, or only HomeKit-enabled outlet to come to market, it is the only one using Bluetooth over Wi-Fi. The iHome iSP5 Smart Plug and the iDevices Switch both have already been released at similar price points. If you’re looking to start building your smart home, the Eve Energy is a good first step. Most everyone will have a lamp, fan, or even string lights that they would like to more easily control.

The Eve Energy is part of a host of HomeKit-enabled Elgato products including an indoor air sensor, an outdoor weather sensor, a door and window sensor, and can be found on Amazon for around $49.95.