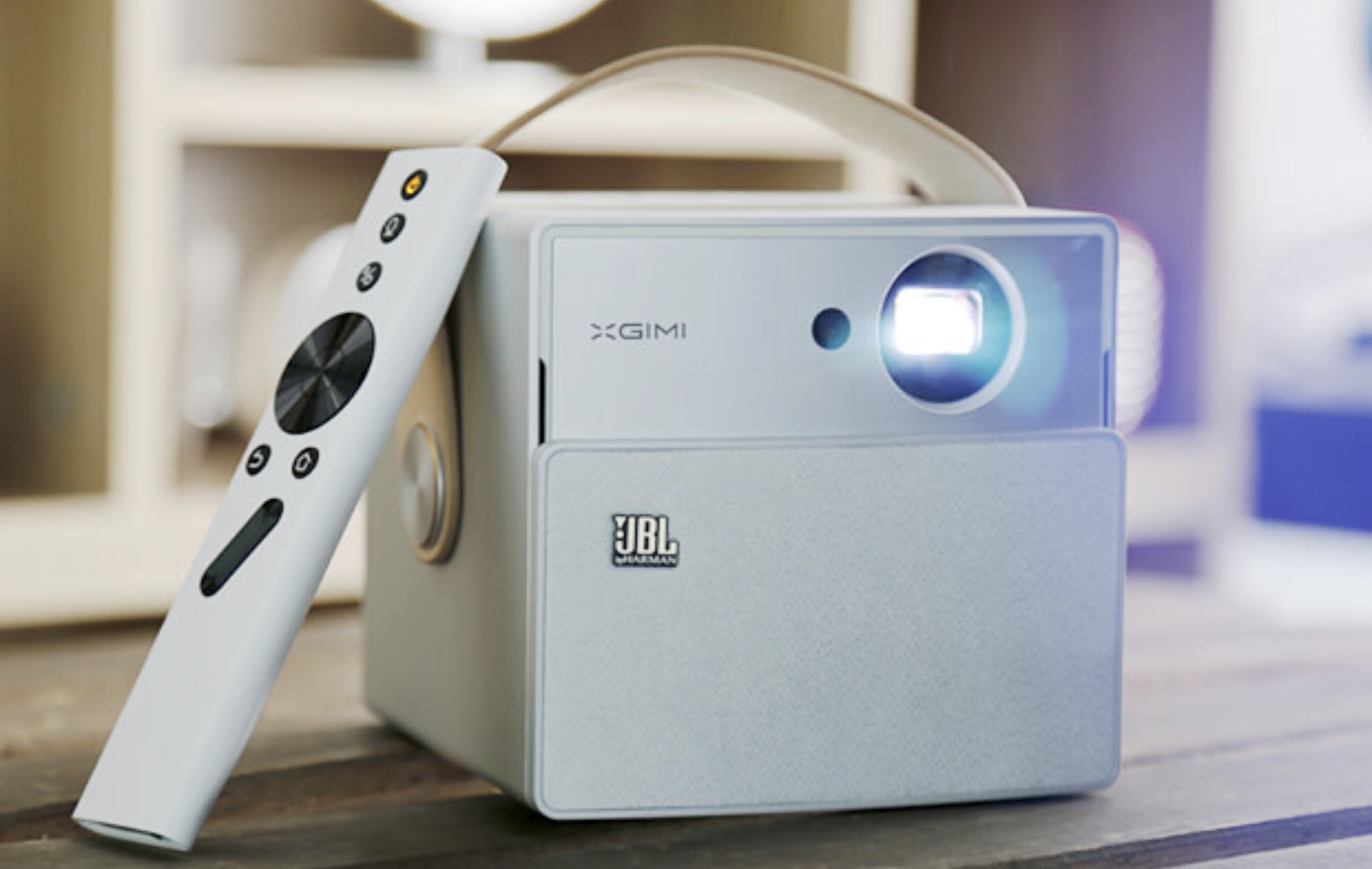 There is no shortage of portable projectors—just take a look on Amazon and you’ll find seemingly hundreds of options. The Aurora CC projector from XGIMI is one of the most featured packed out there.

Supporting 4K inputs and 720p output, it can be used to mirror your device with AirPlay or even watch 3D movies. If this isn’t enough, continue reading to see what else this impressive projector is capable of.

While it is a bit hard to accurately film the projected image from the CC Aurora, take a look at our hands-on video to get the best impression of this useful gadget.

The XGIMI CC Aurora is currently available for preorder on Indiegogo, and I got to test it out for the past few weeks. Having tried several pretty neat portable projectors, I’m usually left underwhelmed due to the lack of any standout features.

This device is the first one that bucks that trend.

Taking a look at the hardware first, the CC Aurora is a cube roughly 5″ x 5″ x 5″ in size. There is a strap on the top to easily pick it up and the included carrying case easily fits the projector, the remote and the power cord. To activate it, you simply slide down the front panel to expose the lens behind.

The front houses your speaker, the lens and JBL’s audio logo. 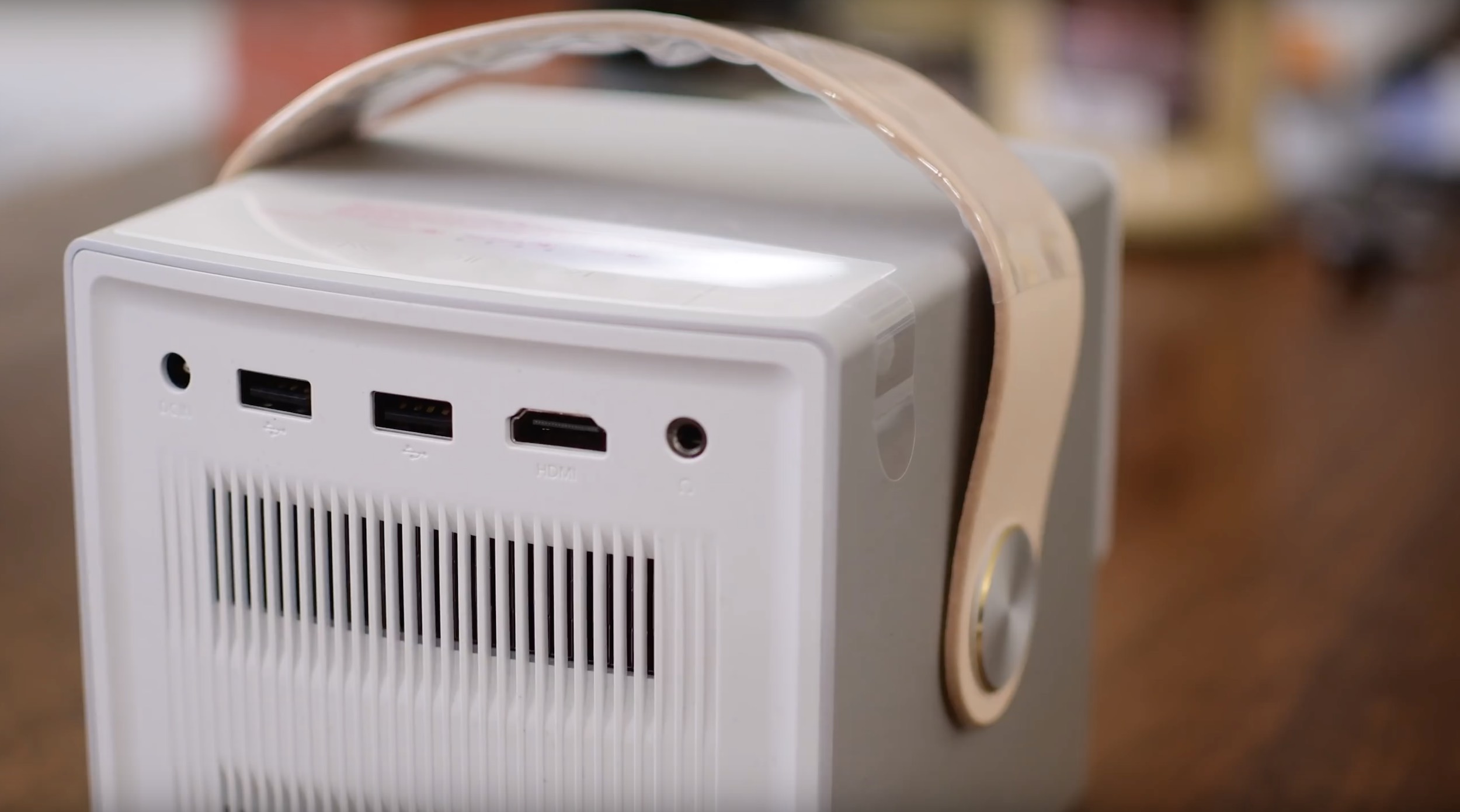 The rear sports two USB ports, an HDMI port, 3.5mm audio jack and a power input. It seems everything here has been well thought out and put together. I especially like how you slide the front down to turn it on, as it is an easy way to protect the lens when not in use. 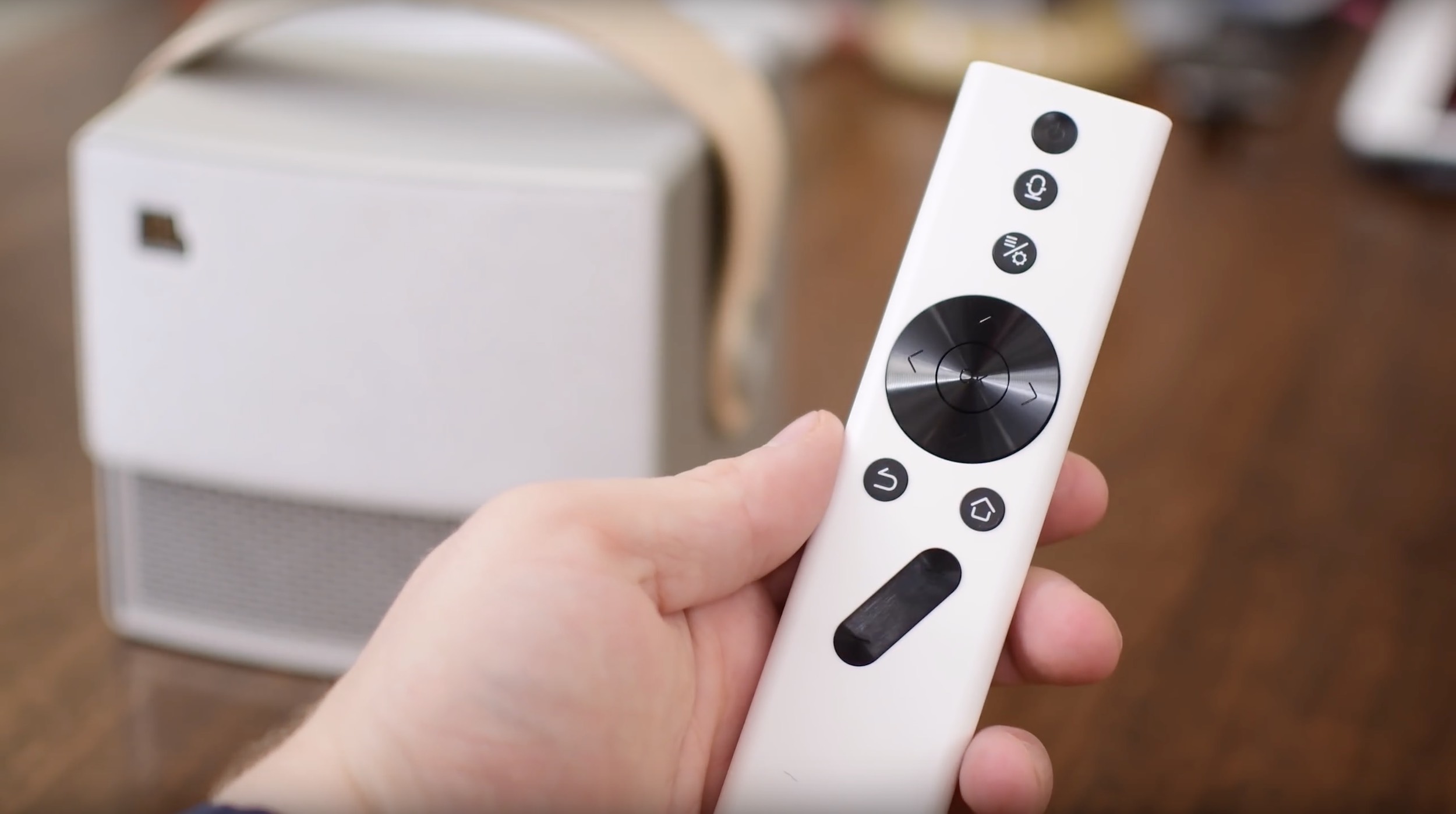 The Bluetooth remote is a bit on the large size for what I expected.

Featuring all the controls you need—including a microphone and focus switch—the remote is lighter than I would have liked it to be. As I ended up using the app more than the remote, this is something I can easily forgive.

The CC Aurora is running a version of Android, which offers a lot of benefits over most projectors. It essentially adds quite a bit of smarts to the CC Aurora while receiving frequent upgrades that add additional features and extend its functionality.

The interface is very nice and simple, with a series of cards going across the screen. You just scroll left and right to choose an app to launch. By default, you have YouTube, a file browser and a web browser, but there’s an app store when you can install more apps such as HBO, Netflix and a variety of games. 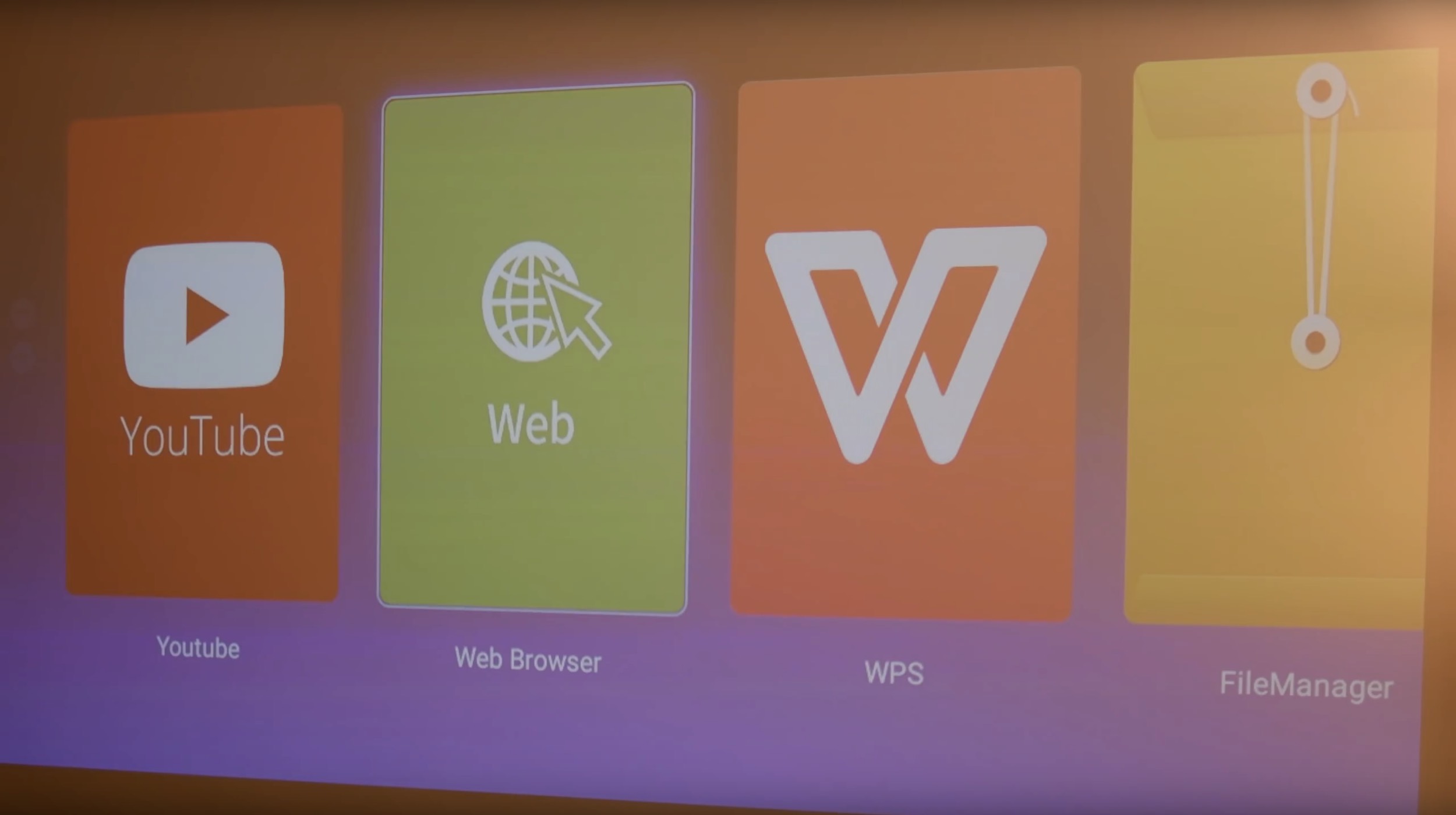 The file browser is quite robust, allowing you to easily access the local storage as well as network attached storage devices. I was easily able to stream an HD movie from my Western Digital MyBook that was automatically discovered.

Swiping all the way to the left, you have the option to switch from the onboard streaming solutions to the HDMI input. It is capable of handling up to 4K input and will output that video at 720p resolution.

There are a number of items that make the CC Aurora unique.

To start, it’s a very bright projector at 1,400 lumens, which compares well to similarly priced competition. Sony’s CL-MP1A is only 100 lumens and Vivatek’s Q3 Plus is 500 lumens. Even in a fully lit room, I was surprised how much the picture stood out. The maximum image size is also large with support for up to 180 inches which equates to a 15-foot diagonal image.

In other words, that’s easily enough to fill a wall. 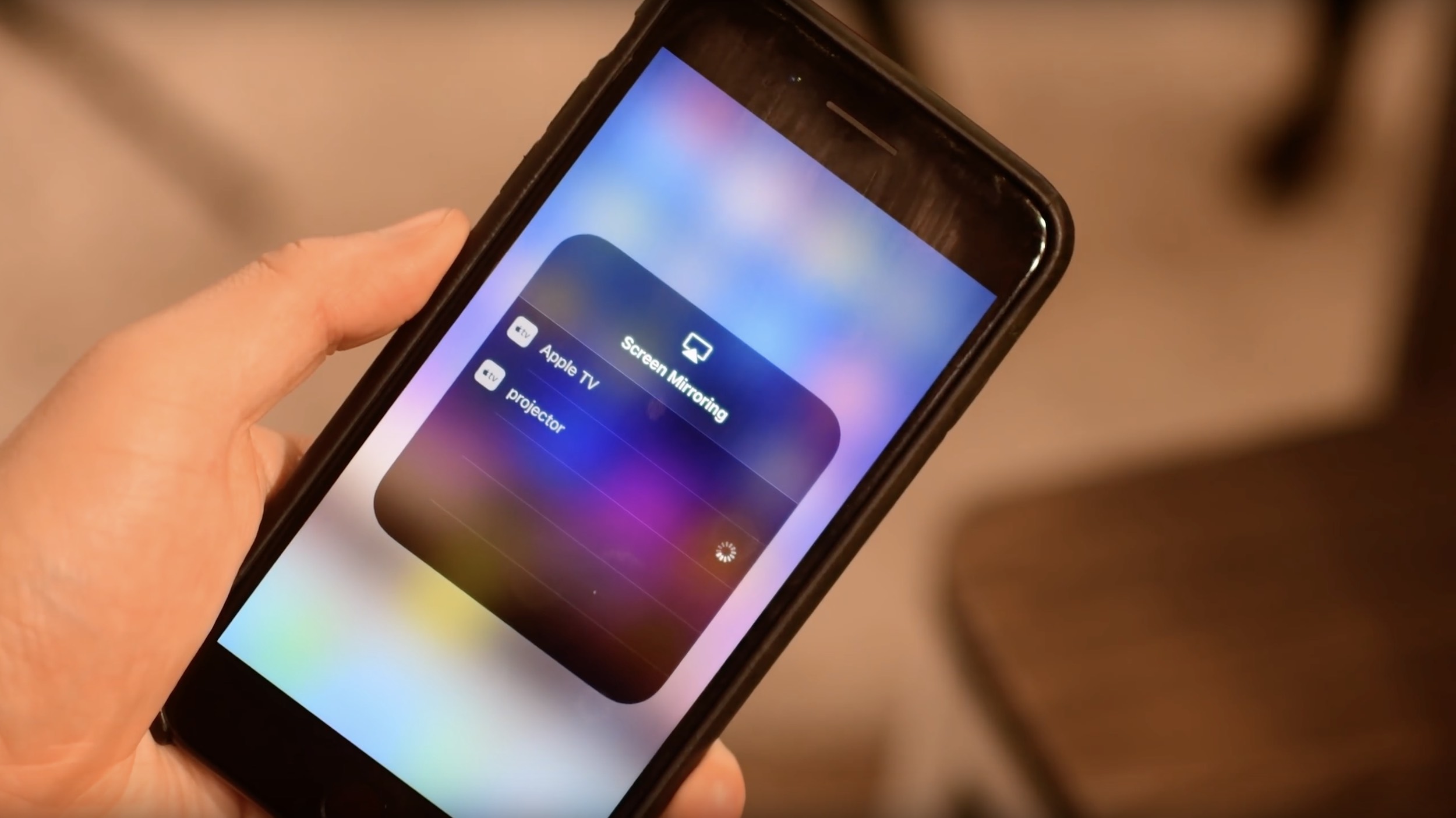 You are also able to use Apple’s AirPlay with this device.

I’m not talking about just AirPlay for audio, but video as well. You can mirror your Mac, iPhone or iPad, as well as push any video source to it using AirPlay technology: it’s pretty awesome being able to stream Netflix from my iOS device or Mac to the projector, all wirelessly.

The CC Aurora can render 3D video, too.

3D has been fading, but I’m still a fan. I think there are drawbacks to 3D TV, but it still offers some unique experiences. I got to try it out with a pair of XGIMI’s active 3D glasses, and it worked surprisingly well—especially on an image that large. I enjoyed the 3D experience more on such a large display compared to my TV.

The fact you can install additional apps is a compelling nice-to-have. If you want to watch Netflix or HBO, you don’t have to use HDMI or AirPlay, you can literally just sign into the app and stream over Wi-Fi.

XGIMI has quite a bit of experience in creating projectors so this isn’t their first by any means. Their product experience pays off as the CC Aurora has thoroughly impressed me. When they call it a portable cinema, I believe the hype. 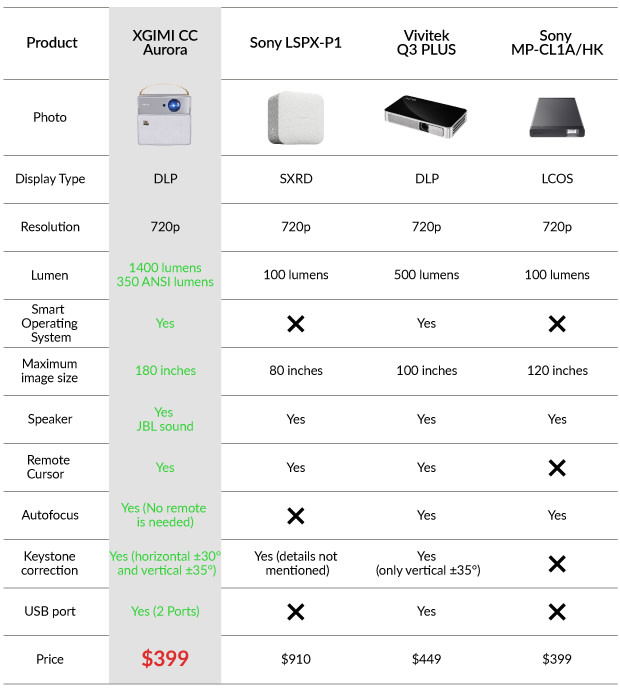 While it’s a bit larger than other pico projectors, I can overlook this with the feature set the CC Aurora brings to the table. If I had to pick the top three features to choose this projector over most others, I’d choose AirPlay, built-in JBL speakers and image quality.

Let’s break it down into a summary of pros and cons:

The CC Aurora is available now for preorder from Indiegogo for an early bird price of $399.

The expected MSRP is $569, so that’s quite a discount.

It’s still a crowdfunding campaign so there are no guarantees. But as an existing company with established experience in projectors that has the product this solid already, I feel comfortable funding them.

While I am clearly excited about this projector, I’m always interested to know your thoughts. Let me know what you think, good or bad, below in the comments.