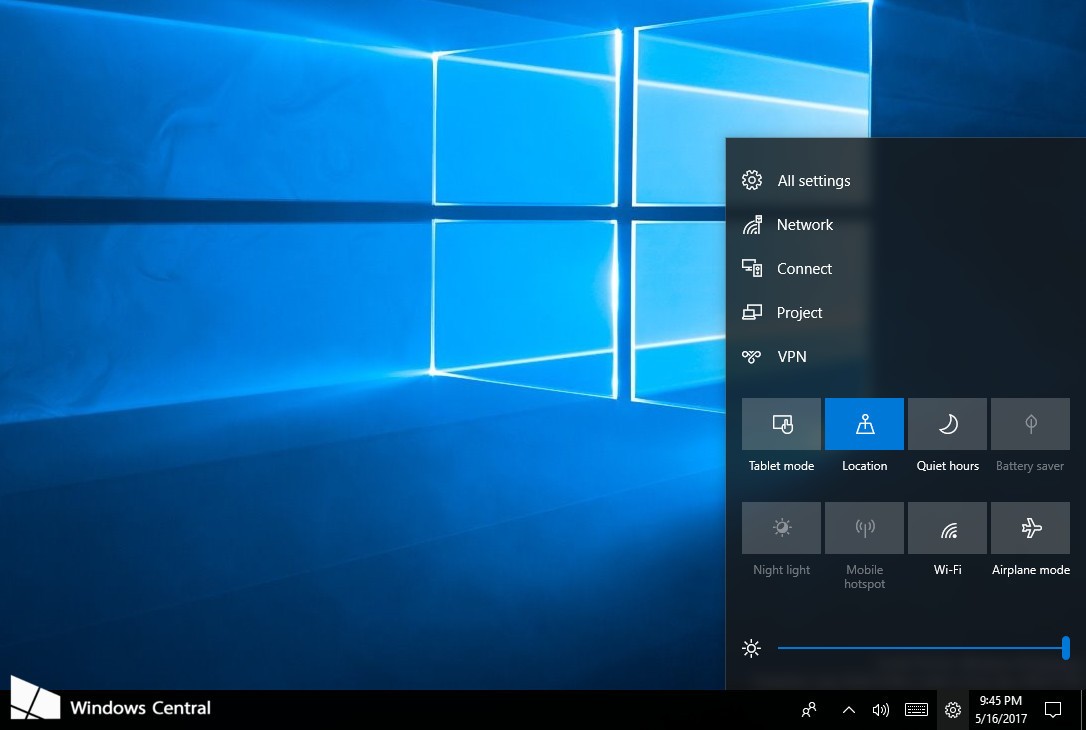 Microsoft accidentally leaked a new Control Center feature understood to be coming to Windows 10 this fall. A screenshot from an internal build of the software (Windows 10 build 16199 for PC) reveals a new settings cog icon in the system tray.

The icon is not present in the latest Insider Preview builds.

Microsoft removed the screenshot from its Windows Blog, but not before Windows Central was able to grab a copy of it. Clicking the settings cog icon pulls up an overlay, called Control Center, that houses all of the Quick Actions available in Windows’ Action Center today.

You can quickly enable or disable Wi-Fi, activate battery saver mode and more. A few additional toggles, such as a brightness slider, are present as well. Plus, Control Center houses useful shortcuts to full settings menus for things like networking, Control Panel and more.

Here’s an excerpt from the Windows Central article:

Sources say that moving Quick Actions to Control Center means they will no longer be present in Notification Center, as having them in both locations would be confusing. It appears Microsoft will be turning Action Center into a pure notification center with the Fall Creators Update, moving out all the Quick Action stuff into Control Center instead.

Unlike Control Center in iOS, its Windows counterpart is fully customizable.

You can change what shows up there and even reorganize some of the settings to your liking, unlike Apple’s implementation which doesn’t let iPhone or iPad owners add or remove toggles in Control Center or customize existing ones to their liking (unless they jailbreak).

One interesting change that iOS 10 brought to Control Center is the ability to access Quick Actions on devices with 3D Touch by pressing the Flashlight, Clock, Timer or Camera icon at the bottom of the Control Center interface.

Control Center, along with other improvements, should be part of Windows 10’s Fall Creators Update. Apple will be previewing its own OS updates next month and it’ll be interesting seeing if the Cupertino company is planning on porting iOS’s Control Center feature to macOS.