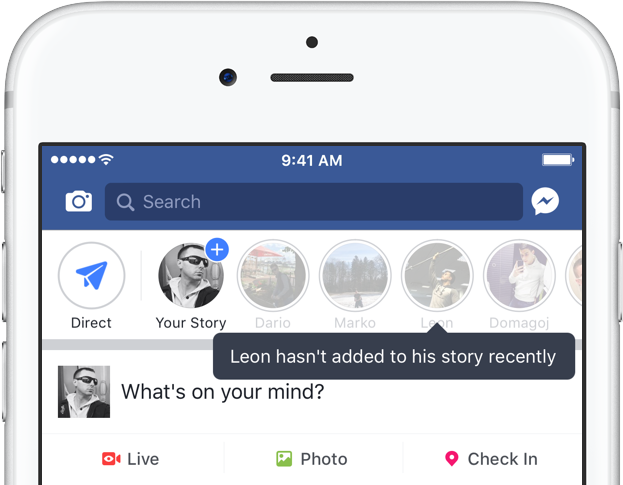 Facebook last week rolled out a Snapchat-esque Stories feature to all users of its mobile app. So far, most users seem to be ignoring these glorified auto-vanishing slideshows so the company is introducing some visual tweaks, possibly in an effort to boost usage of the feature.

As first noticed by The Verge, friends who aren’t using Stories now appeared ghosted at the app’s top as a bit of encouragement for the new feature.

Originally, circular profile images of your friends who have posted a Story appeared at the top of the interface. If none of your friends used the feature, all you saw was white space along with a Your Story button for posting your own Story.

The app now fills out this space with both your friends’ Stories and grayed-out profile pictures of friends who have yet to post one. Tapping a ghosted picture yields a message informing you that this person hasn’t added to their Story recently.

This behavior is different than Instagram Stories, where friends’ Stories are greyed out after you have viewed them but the Stories section at the top never gets populated with profiles that haven’t posted a Story of their own.

Just like Snapchat Stories, Facebook’s version lets you post photographs and videos spiced up with doodles, effects, text, smileys, stickers and so forth. Your Stories are shown on your Timeline and may appear in your friends’ News Feed.

If so, how often do you post to your Story?