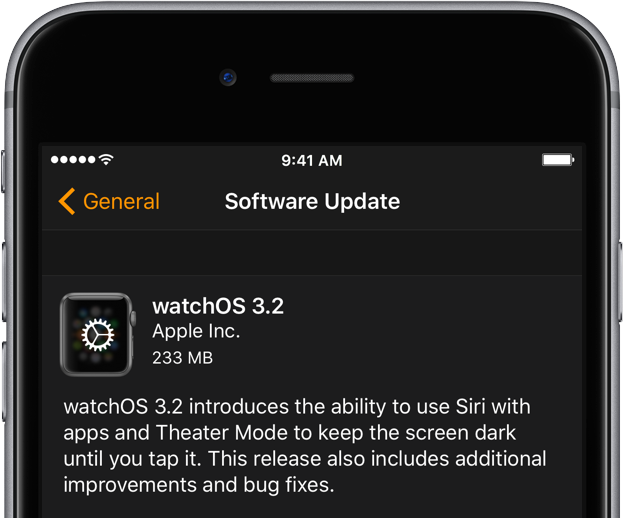 Shortly following the public release of iOS 10.3 for iPhone, iPad and iPod touch today, Apple also released watchOS 3.2 (build 14V249) for Apple Watch with Theater Mode and Siri in apps. The software update can be deployed via the companion Watch app on your paired iPhone with iOS 10.3 via My Watch → General → Software Update.

Your Apple Watch must be connected to its charger and have at least fifty percent charge to install the update.

TUTORIAL: How to install software updates for your Apple Watch

Like with iOS 10, only certain types of apps are currently supported. For instance, you can ask Siri on your Apple Watch to send a message, make a payment, book a ride, start a workout, call a contact or search photos in compatible apps.

It also brings Theater Mode to Apple Watch via a new toggle in Control Center. With this mode enabled, features like Raise to Wake and audible alerts get disabled or muted temporarily while still keeping system haptics on.