A lot of times, there might be more than one Wi-Fi network in a given location. Sometimes one wireless router is broadcasting multiple channels on a guest/private basis, and other times there are simply more than one wireless network. In any case, you likely have a personal preference in terms of which one you like to connect to.

For anyone in this kind of predicament, a new free jailbreak tweak called PreferMyFi 2 by DillanCodez can be very useful in ensuring you’re always connected to your network of preference whenever possible.

As an example, if you’re good friends with your neighbor and have access to their Wi-Fi network, but their wireless router is within close proximity to your house, your iPhone might periodically change between your network and theirs depending on which signal is stronger.

Apple is just trying to give you the best internet connection you can get, but sometimes this can be a privacy risk. That said, it can be a good idea to designate what Wi-Fi network you want to use to ensure your information is being relayed on the most secure network of the two.

Similar circumstances are possible even if you’re at work or in school, where there is often more than one wireless network available. As you move throughout the building, your device may hop from network to network to ensure you have the best connection, whether you want it to or not.

Many times in institutions, Wi-Fi networks are divided into guest and private channels, in which the former is less secure, slower, and websites are more limited, while the latter often offers higher degrees of bandwidth, security, and website access. It wouldn’t be surprising to prefer the better half of the network, assuming you have access to it.

That’s where PreferMyFi 2 comes in. You can use this tweak to designate the networks you prefer to connect to and it helps keep your device from straying to other networks when your preferred networks are in range.

Once installed, the tweak puts a preferences pane in the Settings app where you can toggle the tweak on or off on demand and configure up to two preferred Wi-Fi networks that your device will try to stay connected to: 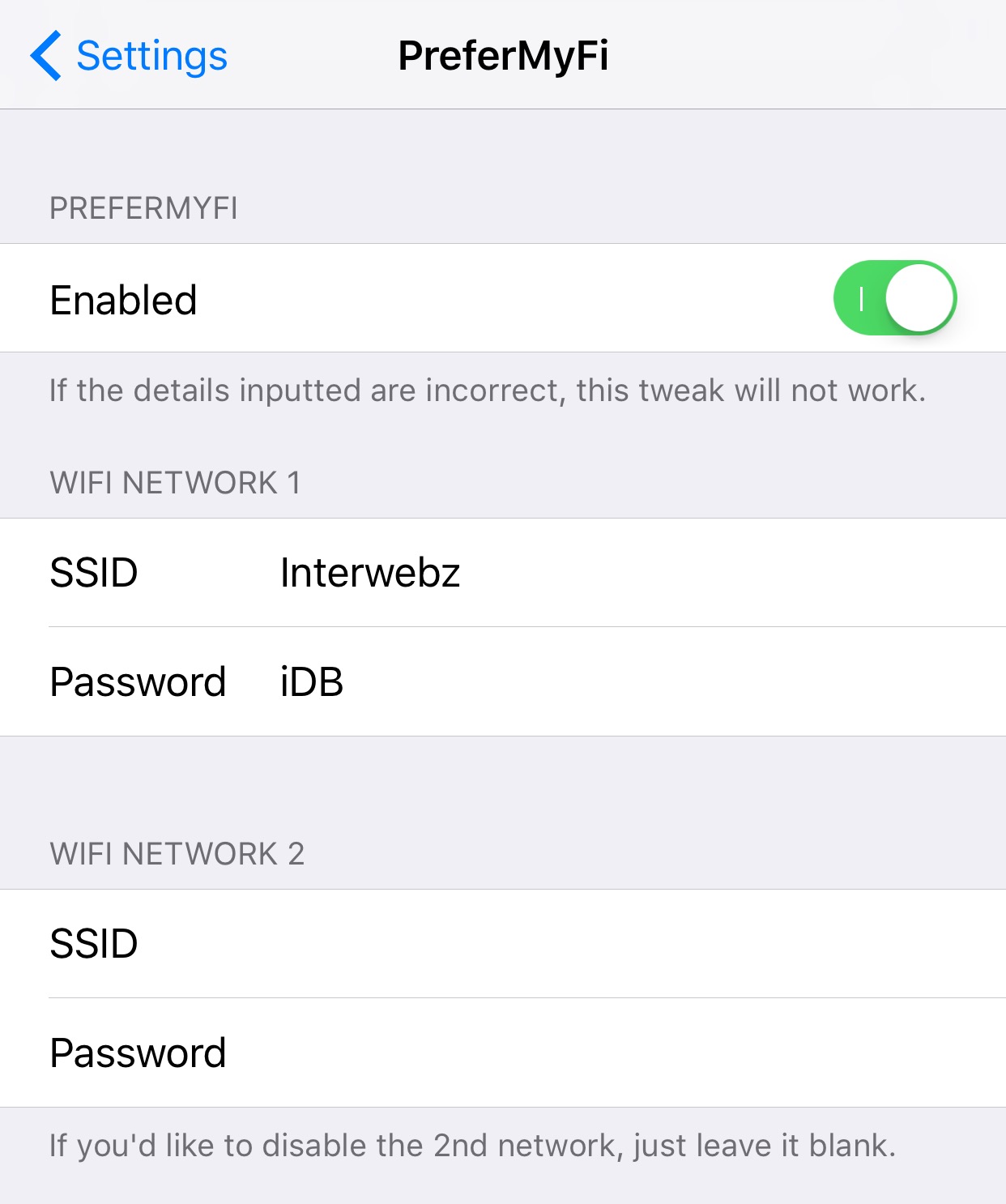 You enter the SSID (network name) and password of these Wi-Fi networks in the text fields, which isn’t really that big of a deal, but one thing that’s really off-putting is how the tweak shows the Wi-Fi passwords in plain text rather than hiding them with security symbols.

You can leave the second Wi-Fi network text fields blank if you don’t foresee yourself being around more than two networks at a time. This box is only intended for where three or more networks are present, as it lets you choose a preferred backup network when the first preferred network is unavailable.

After you set the tweak up, any time you come within proximity of one of your preferred Wi-Fi networks, the tweak will automatically connect your device to it.

You might be wondering, “well what happens when the internet connection stops working correctly; won’t that mean I’ll be stuck on a network that isn’t working?”

According to the Cydia depiction, the tweak makes sure the internet connection you’re using is working. If at any point your device fails to access the internet, your device will then be allowed to jump to your second saved Wi-Fi network, or if it’s not available, it’ll be allowed to connect to another available network instead.

Overall, I could see this being a very useful tweak for anyone who sees lots of Wi-Fi networks on a daily basis. On the other hand, if you spend most of your time at home, around the same Wi-Fi network all day, then perhaps you won’t need it as much.

If you’re interested in trying PreferMyFi 2, you can download it for free from Cydia’s BigBoss repository. The tweak works on jailbroken iOS 10 devices, and may or may not work with earlier version of iOS.

Do you find yourself in situations where PreferMyFi 2 could be useful? Share in the comments below.