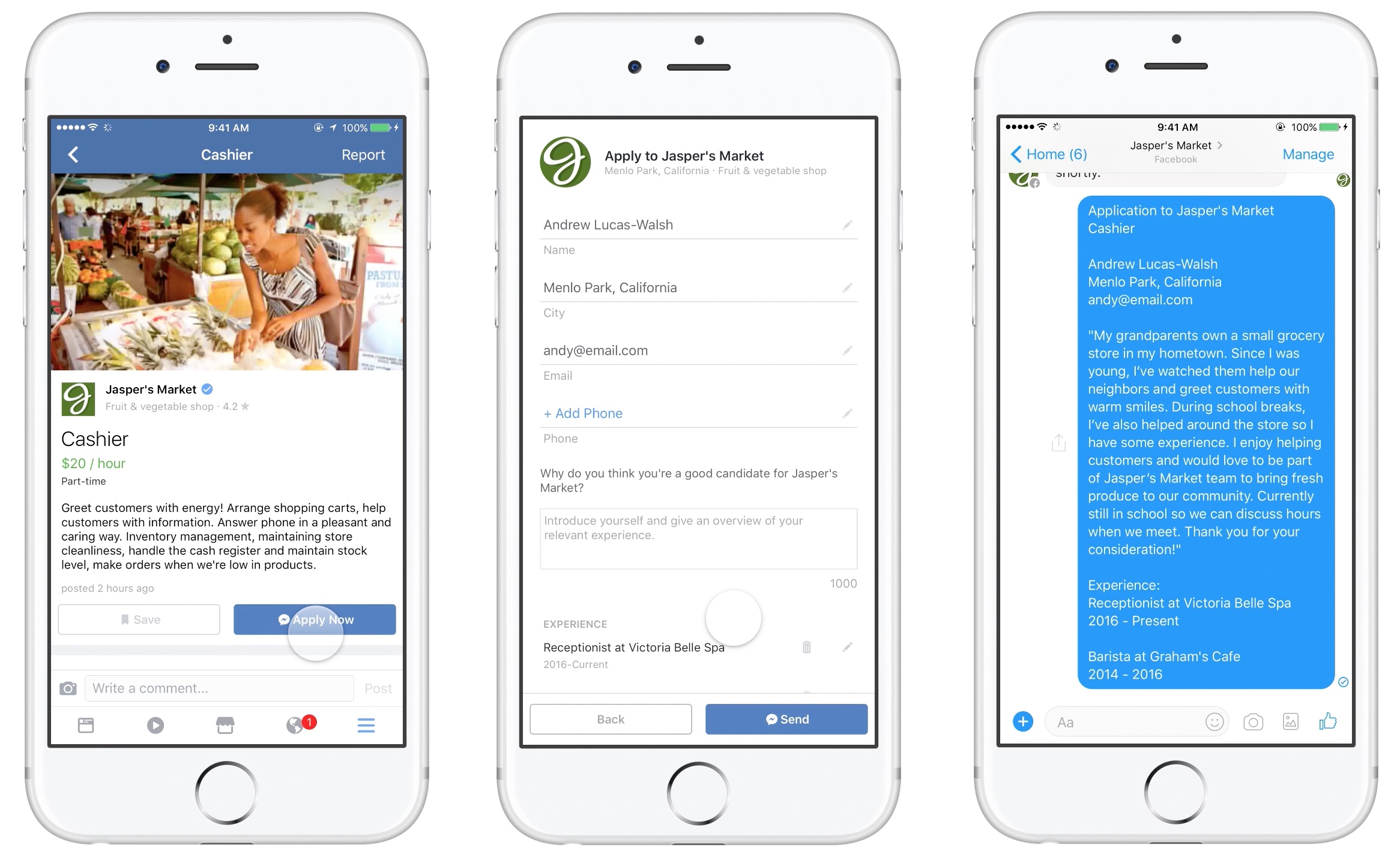 Facebook on Thursday announced it’s rolling out a new Jobs section on the mobile app and via the web interface at facebook.com/jobs. This new feature will allow users to find and apply for hourly-paid job openings advertised on the service by small businesses in the United States and Canada.

Designed for lower-skilled workers and people who aren’t actively looking for a job, the new section is currently in limited testing in the US. Job posts will be accessible through News Feed via a dedicated Jobs tab and promoted on the business’ Facebook Page.

According to Facebook, applicants will be able to search job openings.

Job posts may appear in users’ News Feed, in the new bookmark for the Jobs section and alongside other posts on business Pages. When they find a job opening they’re interested in, applicants will simply tap a new Apply Now button. To make the application process a frictionless experience, the system will pull user and business data from Facebook’s database and pre-fill information.

Applicants then review their information and fill in any missing data before sending.

Small business owners will be allowed to review applicants on Facebook’s web interface, set up an interview date and even contact them by chat, audio or video through Facebook Messenger, all on mobile and all in one place.

According to ADP Research Institute and unpublished research from ADP, LLC conducted in 2015, as many as forty percent of small businesses in US report that filling jobs was more difficult than they expected.

According to the social networking behemoth, they’ve tested the new jobs experience in parts of the US, saying that some of the interested businesses are already filling roles.

“It was great because it was easy,” says Wendy Grahn, co-owner of the Chicago-based Lakeview Kitchen and Market. “It took three minutes to fill out the information and put it out there. Then someone saw the post, we talked and it was done.”

TechCrunch opines that Facebook is taking advantage of the fact that Linkedin has fallen short in terms of focusing on small businesses that are having trouble hiring.

LinkedIn has become a destination for purposeful job seekers looking for medium- and high-skilled roles. But for people seeking part-time or hourly jobs, LinkedIn’s focus on your resume and education might have made them hesitant to sign up, and it’s not designed for applying to lots of jobs en masse. And unless you’re unemployed or actively seeking a new job, you might not have a reason to visit LinkedIn.

“Two-thirds of job seekers are already employed,” says Facebook’s Vice President of Ads and Business Platform Andrew Bosworth. “They’re not spending their days and nights out there canvassing for jobs. They’re open to a job if a job comes.”