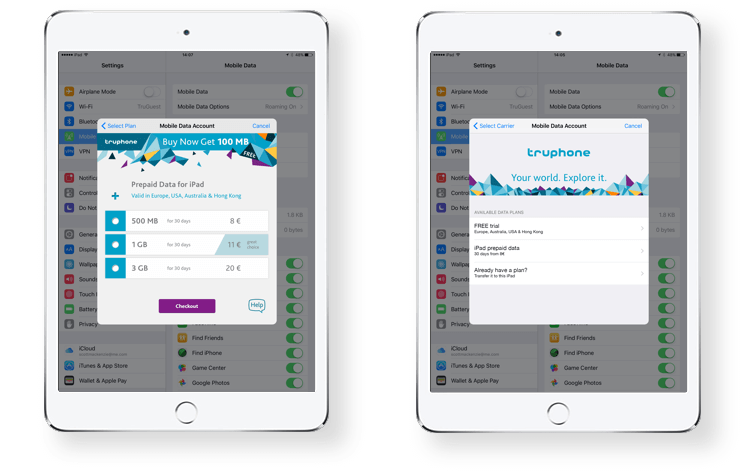 Truphone today announced that its 4G data plans aimed at cellular iPads with Apple SIM are now available in 40 countries around the world, including the United States, the United Kingdom, Australia, France and Germany. Truphone’s pay-as-you-go roaming plans start at €8 (about $8.5) for 500 megabytes of cellular data over 30 days and go all the way up to €20 (about $21.3) for 3 gigabytes of high-speed 4G cellular data over 30 days. They’ll also treat first-time customers to 100 megabytes of data at no charge.

Customers can sign up for Truphone’s service directly on their iPad, by tapping Settings > Mobile Data > Set Up Mobile Data. From there, select Truphone as your provider and the data you need for a month. You can also top up your data bucket with a valid Visa or MasterCard in 40 countries.

On the downside, iPad users must be located within Spain the first time they buy an Apple SIM plan from Truphone, but the service can then be used in any of the 40 participating countries. Support for purchasing Truphone’s Apple SIM data service across Europe and beyond will be implemented in the coming weeks, said the firm.

Here’s the full list of countries where Truphone’s roaming data plans are available:

Apple SIM is supported by a number of carriers, like AT&T, Sprint and T-Mobile in the United States, UK’s Three and EE, as well as AlwaysOnline Wireless, GigSky, SoftBank and Japanese carrier KDDI’s brand called au.

Apple SIM can be used in more than 140 countries and territories around the world.