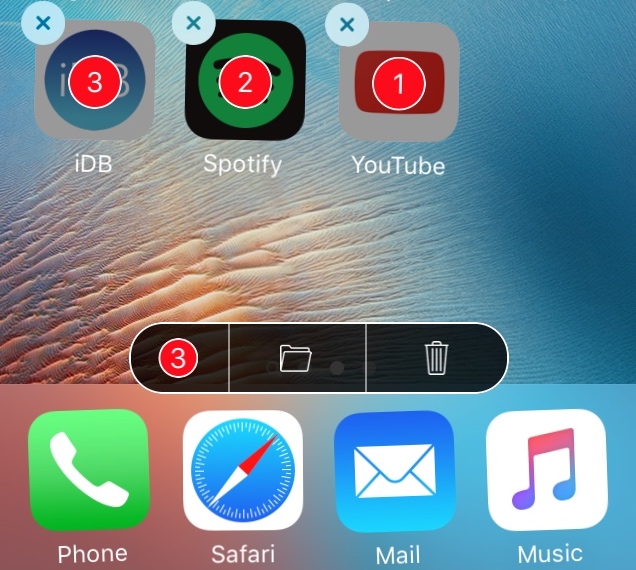 One of the major shortcomings for those with iPhones and iPads, especially those with lots of apps installed on them, is the fact that you have to move or delete your apps one at a time. This becomes cumbersome when you want to put a number of your apps in or out of folders or delete multiple apps at once.

A new jailbreak tweak called MultiActions, on the other hand, will exclude your device from these shortcomings, as it allows you to move or delete multiple apps in bulk without having to do things one at a time.

The tweak has three major features, all of which work when your device is in ‘jiggle’ mode, which is the mode you put your device in when you want to move or delete apps. Those include:

The first major feature we’ll talk about is making a new folder out of apps from your Home screen. After installing the tweak, you can invoke ‘jiggle’ mode by tapping and holding on any app icon from your Home screen, and then you’ll be able to tap on as many of your apps as you want. As you do, the tweak will mark your icons with red numbers, all of which indicate that an app has been selected.

In this case, we’ve selected three apps from the Home screen, so you see the numbers 1 through 3 in the order we’ve tapped. As you select apps, you’ll see a black bar appear at the bottom of the screen, which includes buttons for all the things you can do after selecting apps. Tapping on the one that looks like a folder will allow you to create a folder out of the apps you’ve selected: 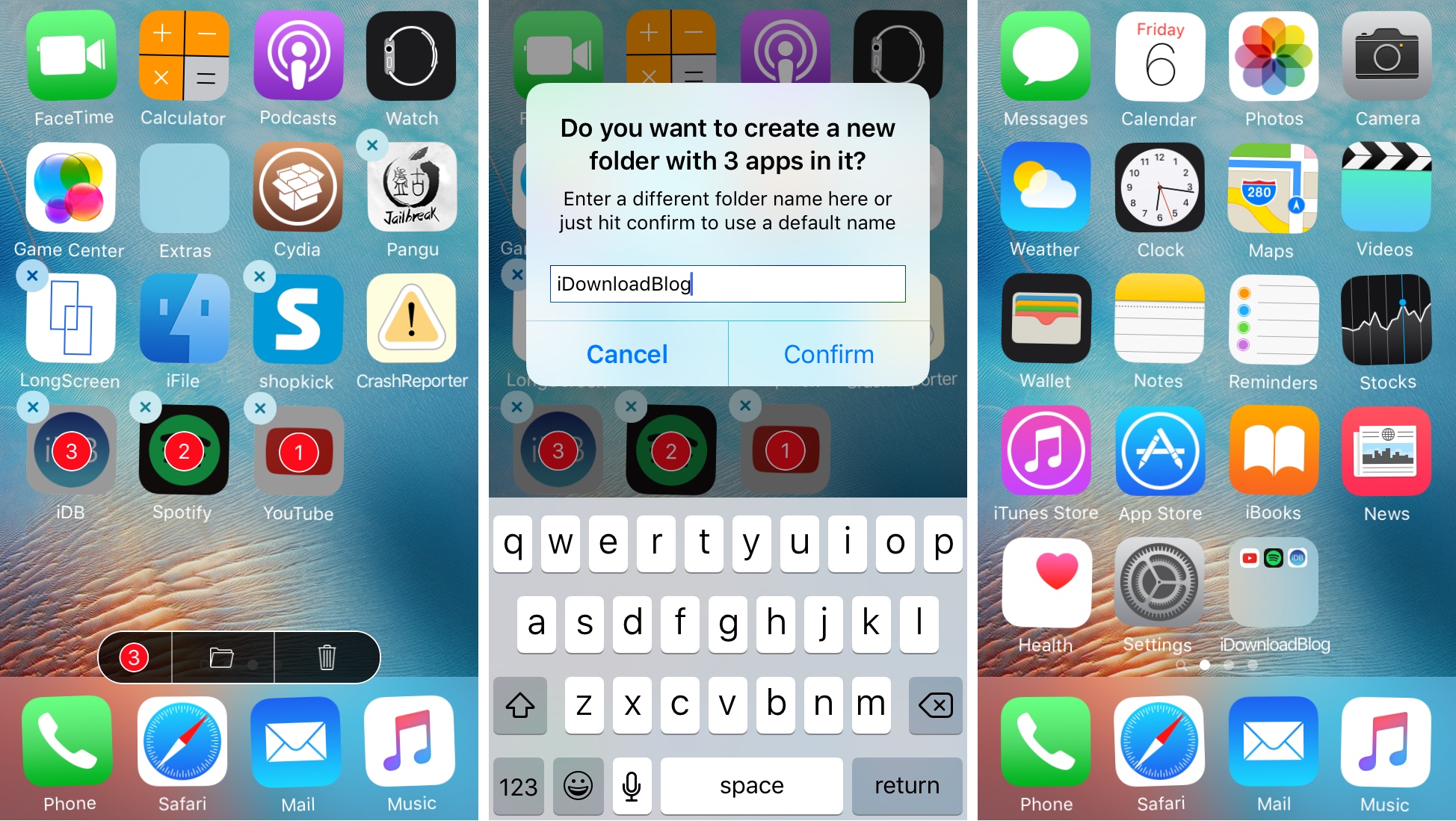 You will then be asked to give the folder a name, and when you name it and tap on the Confirm button, the new folder will be created and all the apps you had selected will be placed inside of it, as shown above.

Moving folder apps back to the Home screen

Another thing you can do after installing MultiActions that’s sure to be useful is move apps from folders back to the Home screen in bulk. To do this, you will enter ‘jiggle’ mode and double-tap on the folder to open it. Double-tapping is required because the tweak will select the folder rather than open it otherwise.

Once you’re in the folder, you can begin tapping on icons from inside of it to select them and then from the black bar, tap on the icon with the folder and arrow, which will move the apps out of the folder and onto your main Home screen.

When you do this, you will get a confirmation message asking if you want to remove the two apps from the folder, and after you tap on the Move button, the apps will be moved to the Home screen as expected: 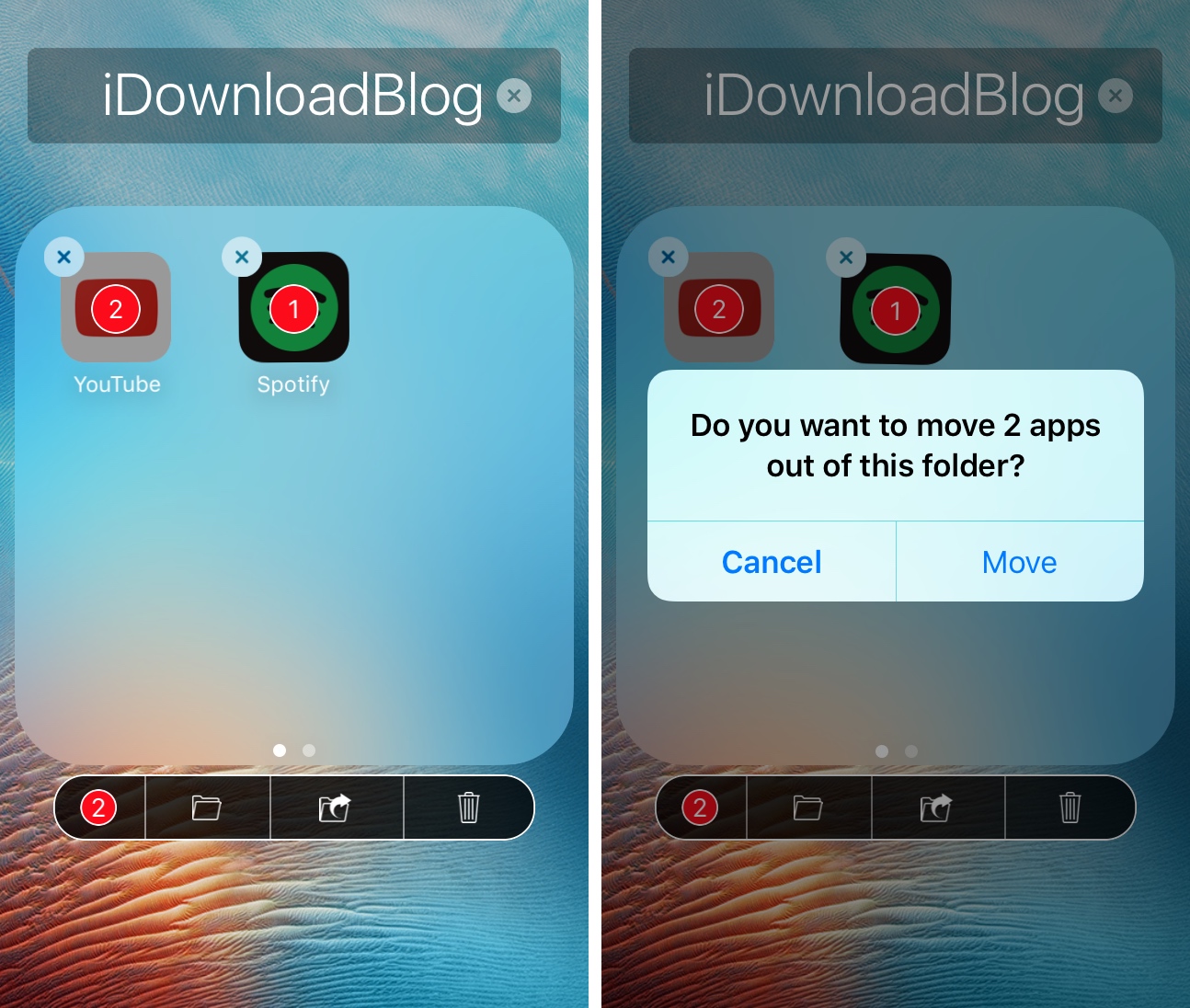 Finally, you can also use this tweak to delete your apps in bulk, which is useful when you realize you’ve been downloading too many free games or apps you don’t need and want to do some Spring cleaning.

After entering ‘jiggle’ mode on your device, you can then tap on and select as many app icons as you would like. Once selected, you’ll have the black bar at the bottom of the screen once again and can tap on the trash button inside the bar. This will invoke the following prompt, asking you to confirm you want to delete app the apps you’ve selected: 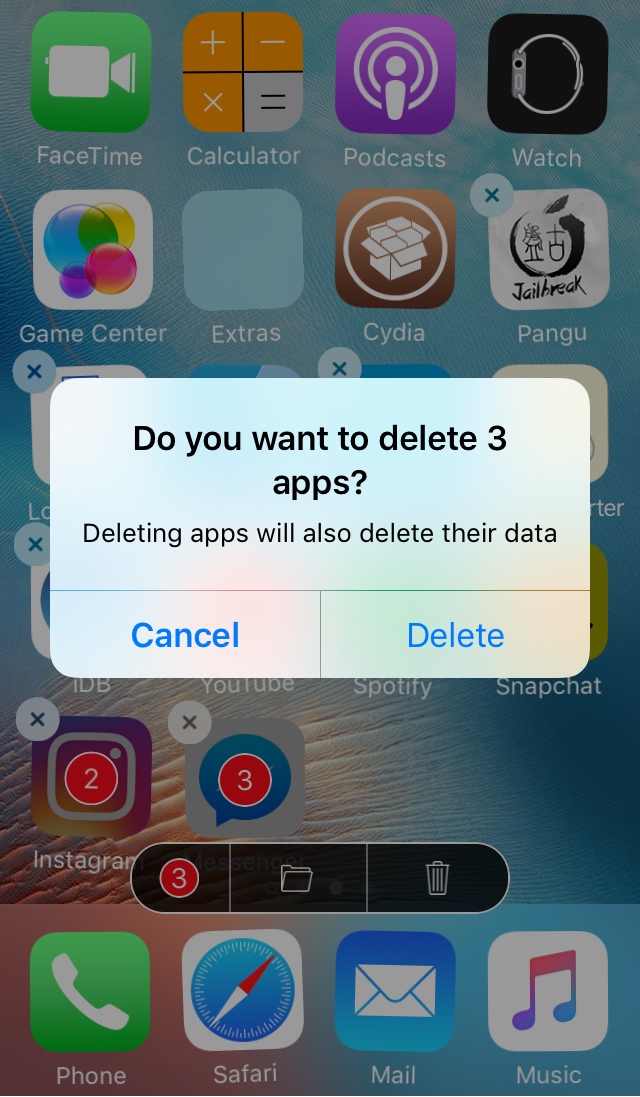 When you tap on the Delete button, all of the apps will be removed from your device simultaneously. Since we selected three apps, that means all three get deleted in just a couple of taps, rather than having to repeat this process three separate times.

MultiActions also adds a preferences pane to the Settings app that lets you configure a number of options. 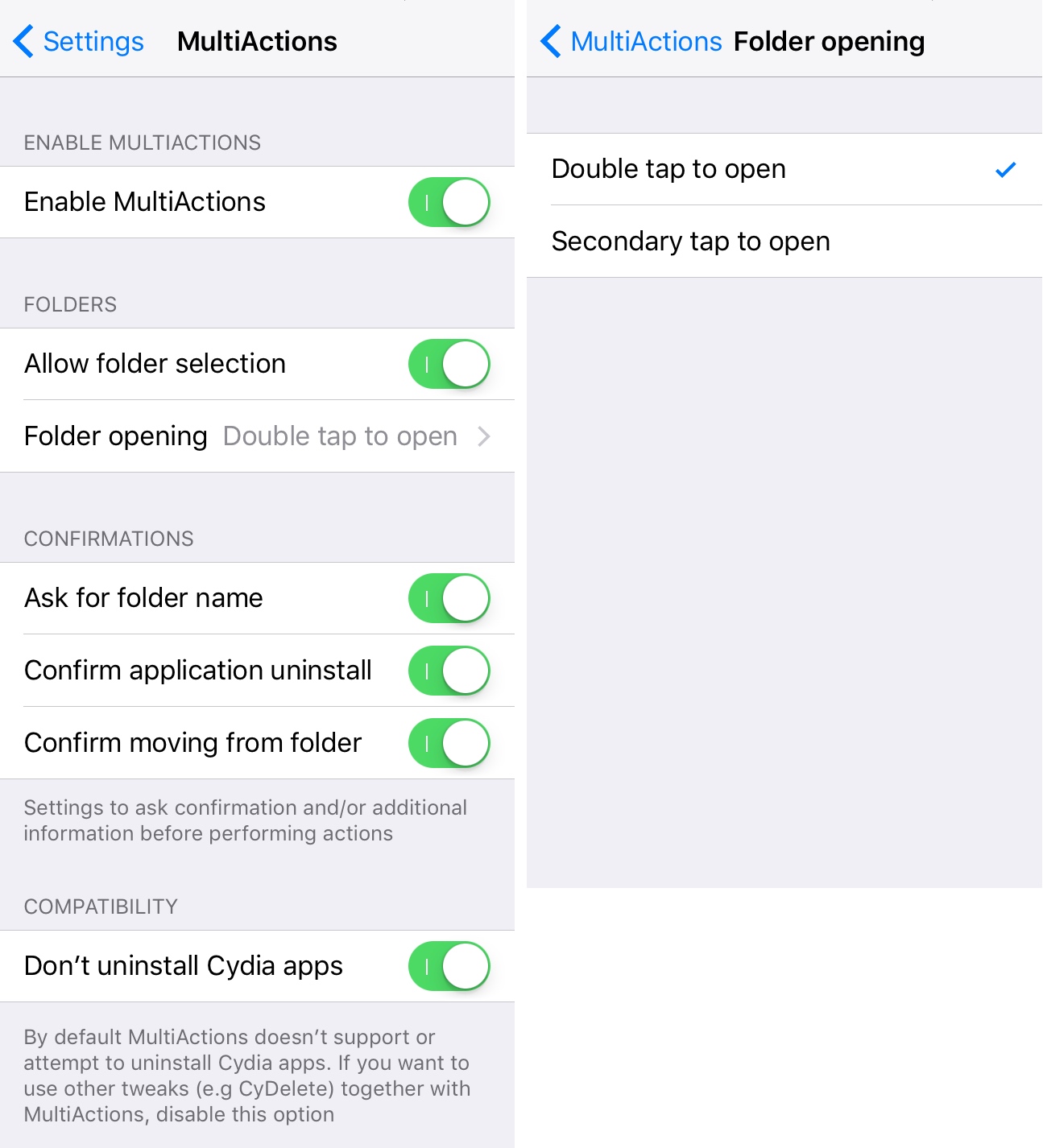 When you go there, you’ll find an option for enabling or disabling the tweak on demand, as well as the following:

The default settings seemed pretty good to me, but with all these options, you can customize your experience whenever you’d like to. There is no need to respring your device to save any of your changes, as they happen on the fly.

Because I always find myself downloading free junk games from the App Store all the time, and then forgetting to delete them later, this is a tweak I would love to have on my own daily driver device if it were still jailbroken. It’s well executed and performs an array of useful actions that I’m sure many will agree with. It also stands up well against its main competition, which is MultiIconMover+.

If you’re interested in trying MultiActions, you can download it on your jailbroken device from Cydia’s BigBoss repository today for no more than $1.49. The tweak requires iOS 9 to be installed.

What are your thoughts on MultiAction? Share in the comments below!