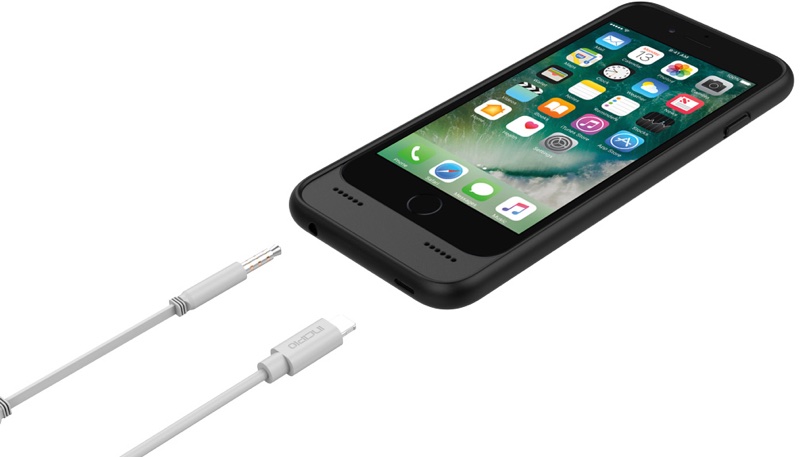 Among the many things being unveiled at CES 2017, accessory maker Incipio has just unveiled a new case for both the iPhone 7 and iPhone 7 Plus called OX that has a built-in 3.5mm headphone jack in addition to a Lightning port.

The case intends to do away with the convoluted process of charging your device and listening to music at the same time even when you don’t have a pair of expensive wireless headphones to solve this problem for you.

From a first glance, the OX case looks like an external battery case because of the bottom lip that protrudes from the bottom of the iPhone, but it doesn’t have any backup power built into it at all despite first appearances.

On the right side of the bottom of the OX is the re-routed Lightning port for charging and syncing your device, while the 3.5mm headphone jack is found on the left side instead so you can plug any of your 3.5mm accessories right into your iPhone without any dongles like the one that comes included in the box of your iPhone 7.

OX snaps onto your iPhone like any other snap-on case could, and a Lightning connector is integrated into the bottom of the case that plugs into your device when you seat it in, which feeds both the auxiliary Lightning port and the 3.5mm headphone jack.

We wanted to bring the headphone jack back to the latest iPhone so our customers could still enjoy their favorite pair of traditional headphones without worrying about low-battery and sacrificing device protection,” said Carlos Del Toro, Director of Products, Incipio. “The protective OX® Case allows individuals to use existing headphones with a 3.5mm audio connector through the built-in headphone jack, while simultaneously allowing access to the Lightning™ port for charging.

Obviously, if you’re already getting used to Lightning-based headphones or Bluetooth-enabled headphones, then the OX won’t be your cup of tea, but it does solve the headphone problem that lots of people are upset over.

Like most of Incipio’s cases, OX also has decent built-in drop protection that typically good for a couple of meters. Considering that OX really don’t add much additional thickness to the iPhone itself, that’s a pretty good feat. Getting over that extra lip on the bottom of the case, on the other hand, is probably going to be any user’s biggest pain point.

Also read: Four ways to listen to music while charging your iPhone 7

Would you consider the Incipio OX case to charge your iPhone 7 or 7 Plus and listen to music on it at the same time? Share below.